Boxmoor Wharf  Hemel Hempstead has to me like many others always been the Lime juice dock. I remember living in Watford and driving to Hemel passing the mountainous stacks of Oak barrels just where BQ is today. Coming over the canal bridge and driving along the side of the dock into town barrels towered above you. In the hot weather they were sprayed with water probably to stop the Oak barrels shrinking and leaking. Thousands of them brought up from Brentford by boat and then shipped to St. Albans for bottling.
It is stated the trip took 12 hours. Canal plan states 27 miles 36 locks 17 hours. Boy would I have liked to be aboard and watch the old boatmen knock 5 hours off.
If the canal branch from Cassio had been built the barrels might have been shipped direct into St. Albans. 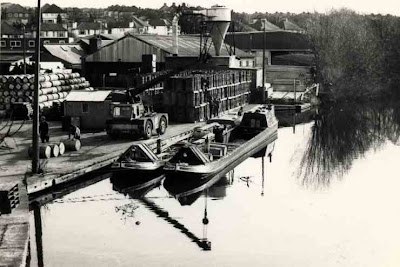 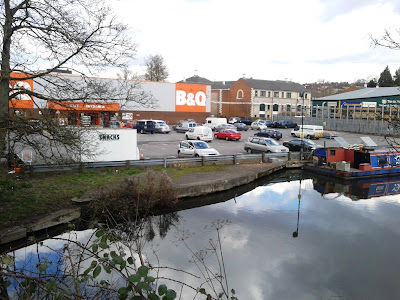 The wharf is owned by the Boxmoor Trust who built it following the sale of 25 acres of common land for£900 ($1400) so the canal could be built.
Now all I have read says they built it but I believe they only built the warehouses and other buildings as in the 3rd picture down. I did find reference to the canal company having allowed for the basic wharf side in the original plans but could not find any more details other than from memory it was to do with a timber mill.
One day I will visit the National Archives and find out the answer to many things that move around in my head like water flowing past the bow, gentle and causing no problems. Searching the old ordnance survey maps in the library's for the original route of the canal was when I discovered how big these wharves were.                         Some interesting facts and figures for the wharf;
Balderson a dealer in coal, stone, timber and the import of wines had a lease on the wharf in 1856. By 1890 his son Henry had negotiated a lease of £100 ($150) per year.
Roses Lime juice in 1946 had a 21 year lease for £150 ($225) rising in 1955 to £450. 1975 and just before Roses become part of Cadbury Schweppes the lease is £23,000 ($34,000)
BQ ( Home Depot to U.S. readers) came along in 1984 paying £50,000($75,000) and onto 1995 £300,000($450,000) In the early years they had a reduced rent owing to a deal with the Boxmoor trust as to the buildings construction by BQ. Last years accounts show the rent was £480,970 and the building reverts back to the trust if BQ give up the lease. 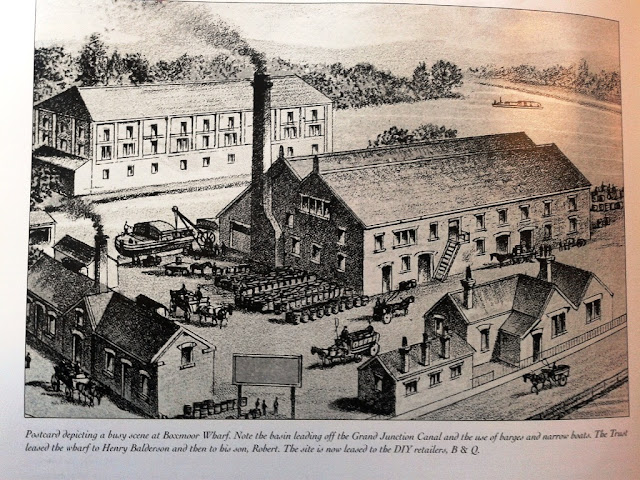 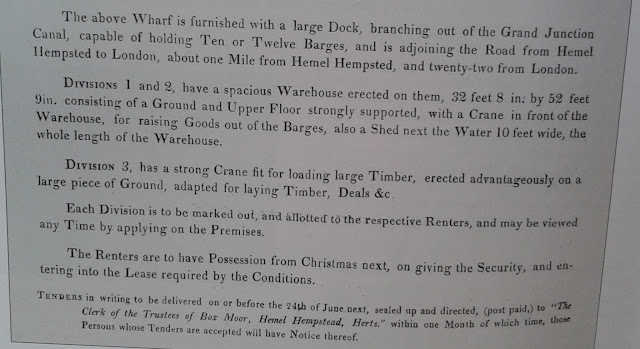 A poster(section above) advertising the wharf refers to it being able to hold 10 or 12 barges! It mentions the present occupier to be Howard and sons who I found held a lease in 1818 so I assume it is around this date the lease is being advertised. 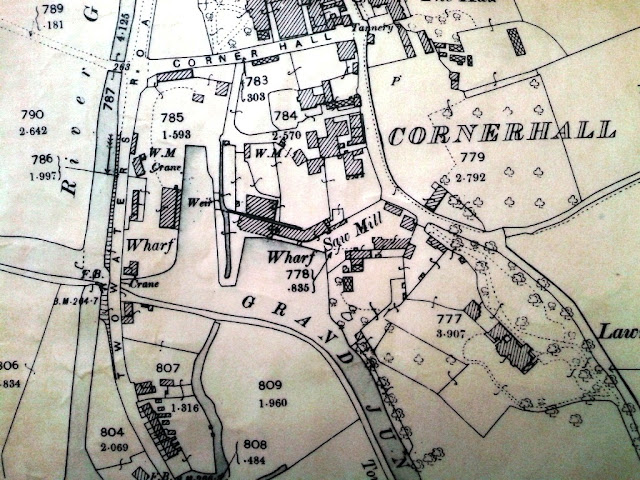 The old ordnance map shows the two wharves. The one on the right was occupied by W. H. Lavers timber and still is today under the name Travis Perkins.  Lavers were at Fishery wharf near the pub/lock of the same name back in 1869 and moved to Boxmoor in 1870 for larger premises. They had timber brought by boat from London docks and processed it in their own steam mill on site. 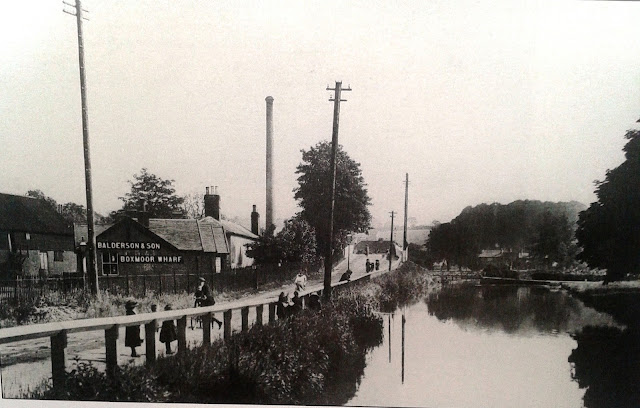 So here we have the same view then and now. In the picture above the caption states......... shows the swing bridge that carried the towpath over the River Gade on it`s earlier course to Two Waters. I assume they mean the old mill whose chimney can be seen.The swing bridge can just be seen but I did find a close up below.﻿ 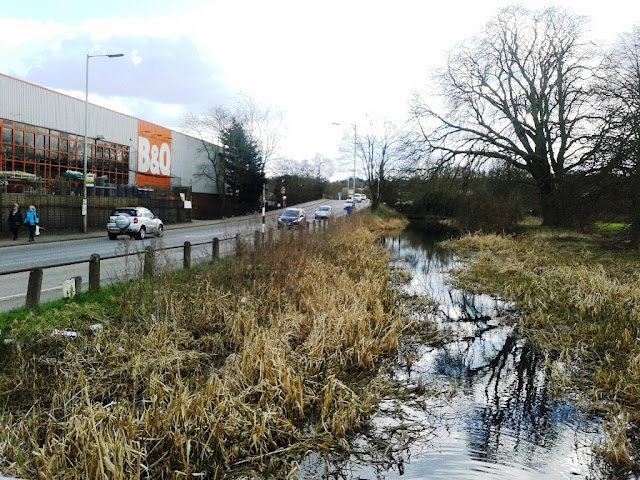 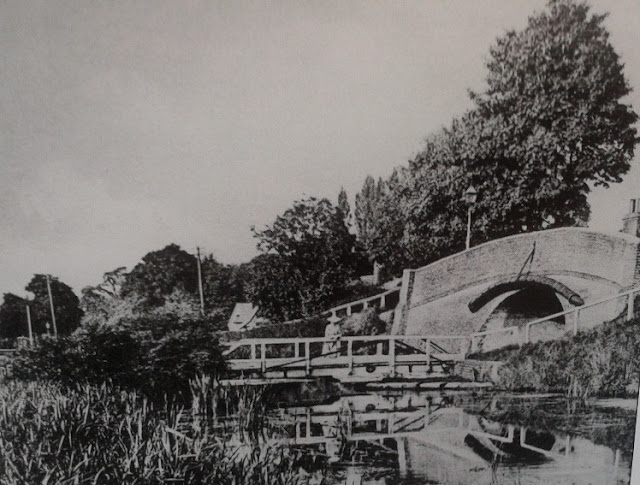 Now this is the swing bridge over the R. Gade. At first I was confused because I assumed the bridge crossed the Gade on the canals offside which made the bridge seem in the wrong place. But further reading and digging out the map above I realised the Gade ran straight through the present day towpath. BQ is just under the road bridge.
Just to the left of this picture is Boxmoor lock 64 the start of the long pound stretching over one and a half miles to the next lock. This was of course before the canals present route came about in 1819.

All the old images have come from; Royalty to Commoners: 400 Years of the Box Moor Trust, Joan and Roger Hands. My thanks
Modern day pictures are my own.
The map is from the library collection and photographed by me. It is beyond the 50 year copyright rule that enabled me to copy it.

That was an interesting blog. I think you should get a video camera and start doing YouTube documentaries :-)

Reading your latest posting reinforces my astonishment time and again how "old" the UK really is in terms of habitation.
In 1818 Canada was still not a nation (that happened in 1867),
and around where I currently dwell, what we call First Nations were still very much in evidence.
The War of 1812 was over, the US lost, thankfully however the land that was to become Canada was still recovering. The extent of what was to become industrial England
was well and truly progressing. Traveling on a residential narrow boat must at times make one feel as if they are stepping upon the souls of those who have pssed in similar conveyances centuries prior.

Hi James/Debbie
It takes a lot of time as it is so my film making days will be put on hold i think.
Thing is the time it takes is such a pleasure, just love history of the canals.

Hi Bryce
Hope your keeping well over there.
Yes travelling the canals you imagine the way it was all those years ago and try to imagine it all without the luxury of boats today. They had not the time to cruise at a lesurely pace it was all work and at times hard work.

Hi Jaqueline, Just reading the history above, Hope you can help me.... I'm a Balderson descendant...Do you know the name of Henry's father that had the lease of Boxmoor Wharf ?
and when and how long did he hold the lease ?. What did he do before he took up wine, coal merchant.I have read so many conflicting stories...
Thanking you for your time.
Gillian Smith
Deniliquin NSW Australia

This post was written by my late husband eight years ago. I am sorry but I have no knowledge about Boxmoor Trust or anyone connected with it. I suggest you contact the Trust directly.

Jaqueline, very many thanks for continuing to publish your late husbands blog. It was a delight to read and brought back so many memories of my own working Narrow boat.

The comment therein of how to knock off five hours on the journey time is really quite simply answered by, todays standard, extreme hard work, plus professionalism of the boater. Couple that with a canal that had depth of water and your halfway there.
Today, many of the normal practices of that bygone age, for efficiency and speed of navigation would be frowned on, likely earning you a severe warning from any canal maintenance employees who witnessed those acts.
Firstly, one has to remember travelling either up or down hill that gates and paddles were left open on leaving a lock unlike today. That fact alone equates to a substantial saving in time and effort.
On a bad road going uphill, where a lock needed to be reversed, a family offspring a child would be sent on ahead to close the top gates and drop, yes literally drop the top gate paddles, before returning to begin the winding up of the bottom paddles to empty the lock. Meanwhile the boats having cleared the previous lock would proceed at speed to the next which still being half full they simply crash into, thus causing the gates to spring apart.
Boat woman standing on prow with a great chunk of tapered wood rams it into the now gap between the gates. Result is an empty lock in less than the time it takes to tell.
Once the wife had performed her perilous operation with the wood, the engine would be wound up to push on the gates until fully opened whereupon the boats could slide into the lock. Meanwhile the lady had returned to her rear cabin well deck in readiness to alight at the lock tail, as the boats passed into the lock.
Sometimes the monkey boat steerer would also jump ship at this point leaving the motor in forward gear at tick over or slightly above and fast approaching the top gate unmanned. Doubling up the stairs to the lock side the steerer would give gate a quick tug to start it closing, before bounding along to the top gate to raise a paddle. This then sudden influx of water provided sufficient power to slow the incoming boats and rapidly finish closing the bottom gates. By adjusting the paddles opening he effectively controlled the progress of the boat.
The boat still in ticking over in forward gear would gently and sometimes not so gently come to rest on the top gate rubbing board and when the time was right the untiring motor would push open the top gates.
There were also tricks of navigation when going down hill, such as attaching ropes from the top of the mast to the bottom gates to pull them open. The ropes being bound to the gate in such a way that as the boats left the lock the ropes became freed and dropped back into the boat of their own accord. No human hand need here to open any bottom gate be it a single or double gated affair, wide or narrow.
Using the power of the boats engine and water to open and close gates was a great saving on both the human energy required to navigate the cut and the time it took.

It is also worth a mention that ALL boaters were, in those bygone days, accomplished navigators, each knowing exactly what to do in any given circumstance, with effect that delays and holdups to other boaters was an extreme rare occurrence. Unlike to day when so many novice boaters are struggling with even the simplest of navigational operations. Which in turn leads to delay and excessive journey times for other boaters, that in addition to poor water depth over much of the system all adds up to many additional hours on a trip.
I have no problem with the novice boater we've all have to learn, be it from our fathers knee or from gained experiences. The greatest cause of hold ups, loss of water and subsequent loss of navigation, I find, are those who think they know it all and refuse to listen to good advice.