Good Things Come all at Once

"Make your life a house your heart can live in, with a door to receive friends and a garden full of many things." ~Anonymous

As we continue to cover the same few miles of waterways while waiting for the next doctor's appointment, I decided it was time to get crackin' on spring cleaning. After all it hadn't been done since March of 2012. We skipped 2013 to head for the Lee and Stort navigation and onward to the Thames, thinking we could do a good spring cleaning in 2014, but Les was recovering from his first two surgeries and so we let is slide yet another year. 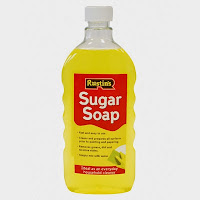 The layer of wood and coal smoke--and soot--on everything was three years in the making. NB Valerie just felt grimy and dirty to me and I wanted our lovely floating home to sparkle. Besides, I love cleaning, and now we have ample time to get it done. Les finally caved in and bought a small wet/dry vacuum. After nine years, NB Valerie was getting a thorough cleaning. Les hemmed and hawed about the need to disassemble the interior of the boat in order to clean. Spring cleaning isn't his favored pastime, nonetheless he is an able and generous partner and a good worker!
Our supplies consisted of four bottles of sugar soap, two spray bottles, a 10 pack of scrubby sponges (sponge on one side and scrubby on the other), a large bucket, and a large packet of personal dry wipes like one gets in hospital.
We started at the back of the cabin, stripping it bare and putting the mattress, all the bedding, and anything not nailed or glued down, forward into the saloon. With the first swipe of a sugar soap laden sponge across the ceiling Les remarked, "Crikey Jaq--look at that! It's filthy!!" I smiled and replied, "Yes dear," as I thought 'tell me something I don't know.' Not only was every square inch of the boat and everything--every curtain, blind, picture, book, DVD cover, pretty collectible nic-nac--covered in grime, but nine years of no vacuuming and only sweeping meant dust bunnies the size of dinner plates hid back underneath the galley cupboards, along with multiple generations of spider webs, the odd dried pea and bits of dehydrated food rubbish from thousands of meals. All that dust and grime absorbed cooking grease and smells, making the boat smell musty.
It took us three and half days to complete the entire boat from stern to bow. Les did the ceilings and the upper walls and I did the lower walls, book cases, drawers, cupboards, and floors. Les took our roller blinds down, soaked them in the bathtub with half a tub of Oxy powder, scrubbed them clean and hung them to dry. We washed all the curtains, and all books were stacked on the table, wiped clean with a cloth and replaced on the shelves after said shelves were vacuumed and wiped down with sugar soap.
And this is why we will never paint the interior of our boat cream. There is a FaceBook page called Canal Boat Interior Design with hundreds of lovely, creative and amazing pictures of things people have done to the interior of their narrow boats. Painting an old boat a lovely fresh cream throughout the inside is quite popular. All I can think of is how quickly it will become dingy and stained when winter sets in and the solid fuel stove is going 24/7.
Spring cleaning done, NB Valerie feels light and airy inside once more. The lovely golden wood grain gleams in the light and it feels like a brand new boat inside. Of course it is taking us both longer than three and half days to recover from all the stretching, reaching, scrubbing, bending, and kneeling. Time to focus on the outside now... 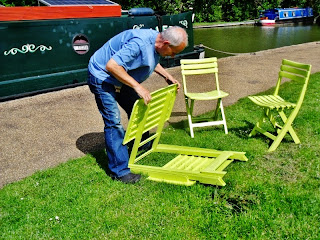 A month ago in the Saturday newspaper a Robert Dyas catalog fell from the folds. Inside I spotted a lovely resin Bistro table and chair set which made my heart quicken. We didn't have anything to sit at and enjoy a meal out on the towpath so we usually sat in the bow. I wanted a nice sized table and two chairs that folded up compactly out of sight on the roof, made of something that would not rot. This Tropea bistro set was just the ticket and it came in white and a lovely bright spring green, for £69.99. Of course I had my heart set on green and Robert Dyas was sold out. 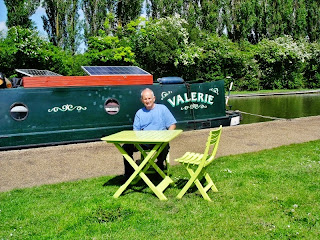 An in-depth search on the 'Net found a half dozen online shops offering the same unit for anywhere from £70 to £149.00!! Finally I found it in green at Primrose Online: Everything Garden for the bargain price of £59.00. I placed the order mid-afternoon and it arrived the next morning! Now that is service!! A huge thank you to Robert and his sister Maria for allowing us to have it sent to an address nearby and for delivery of it to our boat.
Les insisted I call Primrose before I ordered it, and make sure they had the set available in green He sat watching me as I attempted to carry on a conversation. The bloke on the phone said I could put in my order right then. I tried but honestly after three minutes of repeating myself six times, and asking him to repeat himself six times, I just said, "Thank you for your help but I am going to go online and put this order in." After nearly four years living in Britain I am still the one with the accent and I still cannot understand most phone conversations with the plethora of dialects one gets across this country.
Thanks with deep appreciation also go out to Ken and Sue Deveson for all the support, care and love they have lavished on me and Les throughout the past few months. We've visited their lovely home several times. Each visit was a joy; delicious meals, endless cups of tea, fascinating conversation, and an introduction to a great new game helped to break up the monotony of traveling back and forth on the same patch of canal in between NHS appointments made, canceled and rescheduled. For delivery of parcels and husband, my deepest thanks to you both for a lovely friendship.
While moored up at Campbell Park in Milton Keynes, we were blessed to see a wedding party having professional photos taken near the canal. It was a blustery spring day. The Bride and Groom were surrounded by family and friends, all talking and laughing as the they jostled one another for a bit of space during the picture taking.
Little boys all dressed up in three piece suits tried hard to look serious--for about two minutes. Little girls in jewel bright dresses spun and twirled like living confections until the boys could stand it no more and had to jump in and participate. The newlyweds spotted me standing in the bow of the boat snapping pictures so after the official photos were finished, they turned towards me with a smile and gave me a thumbs up! It was the loveliest wedding party I've seen for some time. 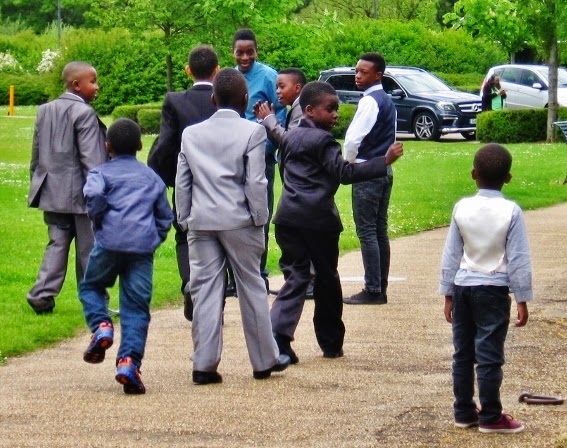 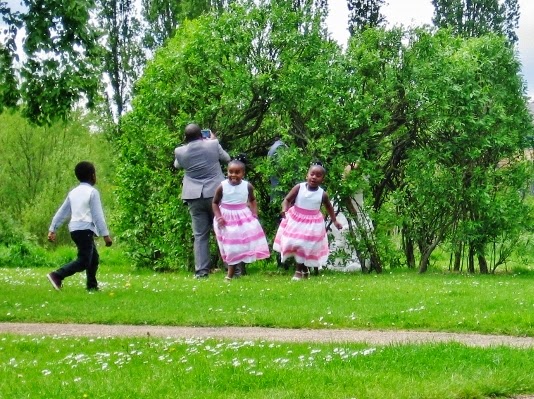 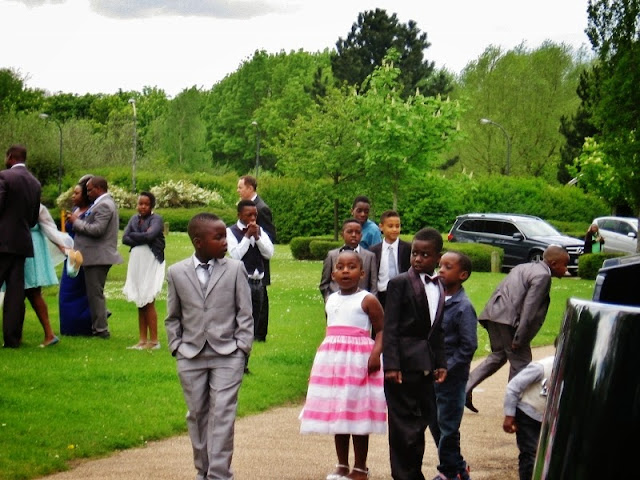 We are nearly at the end of this cycle of waiting. After Les' June 1st appointment with the Royal Free Hospital we are off to cruise in earnest. He has decided to catch a train back to London for all remaining appointments and surgeries. Happy spring everyone!! 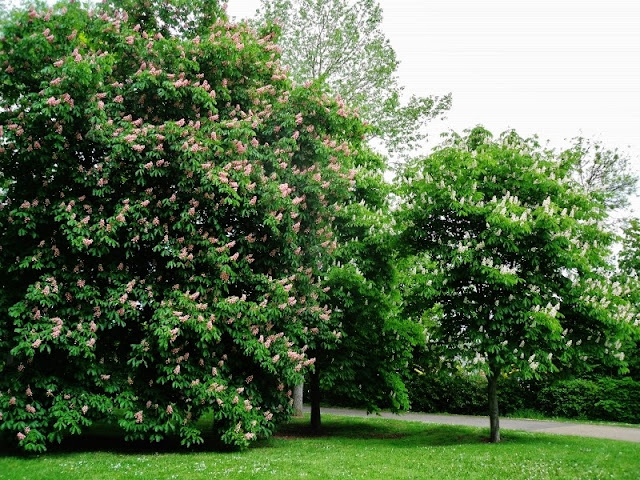 Three men in a Balloon

Just click the video and scroll down through my pictures. 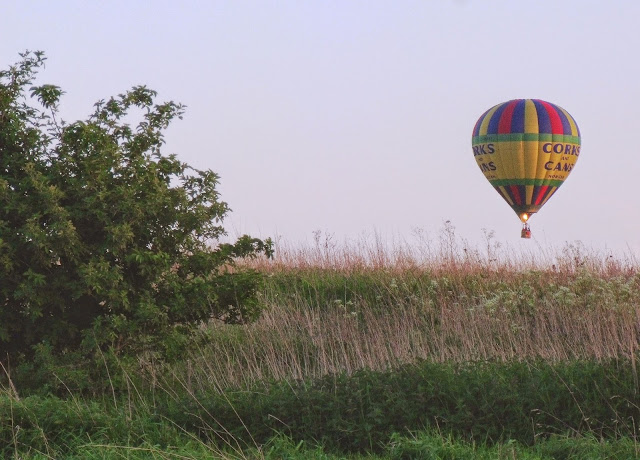 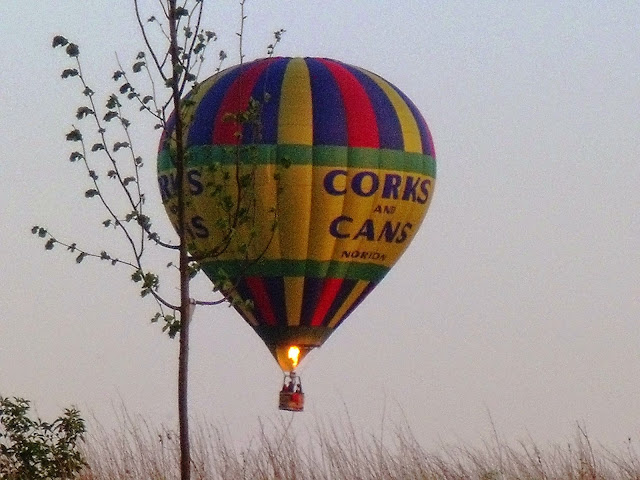 but he seems to be losing height. A few blasts on the burner and things improve 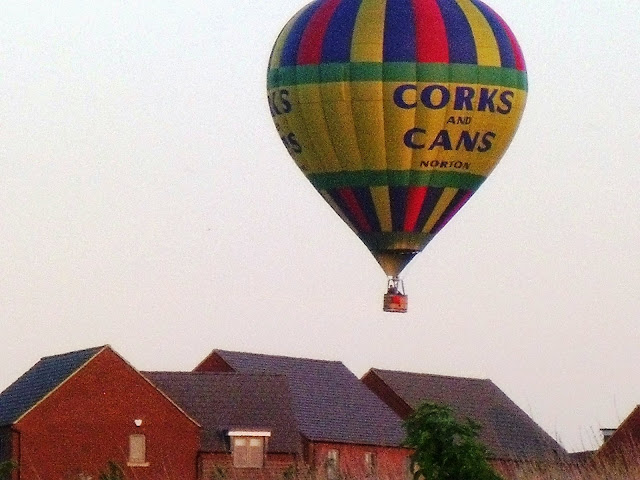 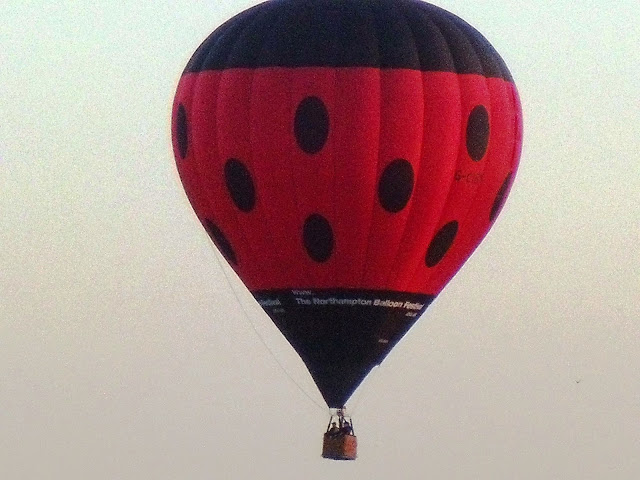 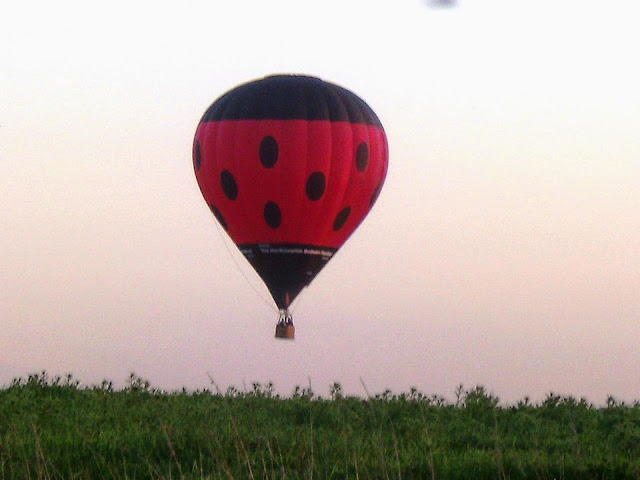 he looks to be just as low as the first one in fact he seems to be getting lower all the time. 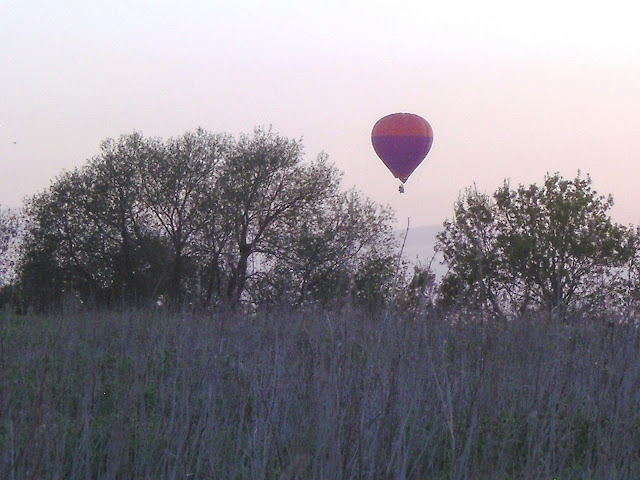 Here comes a third balloon. he seems to be climbing quite fast. 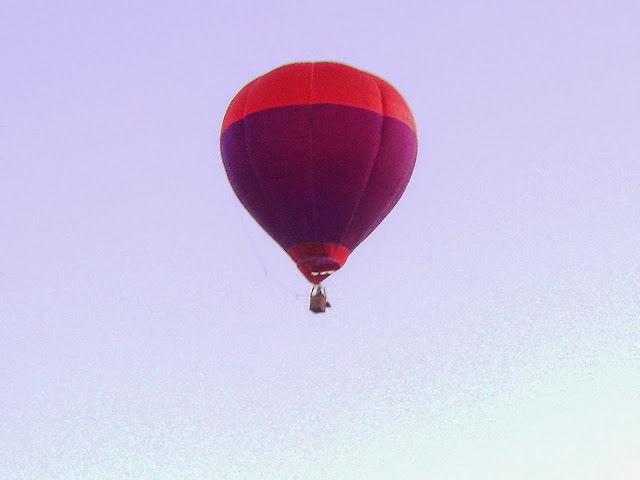 Yep. no doubt about it he`s climbing. Hang on where`s that second one gone. 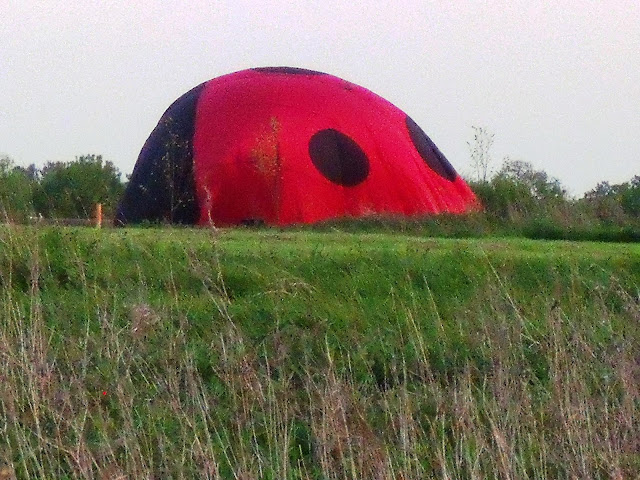 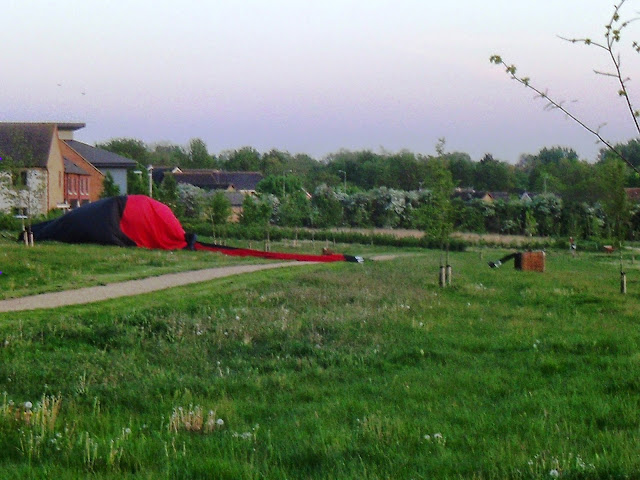 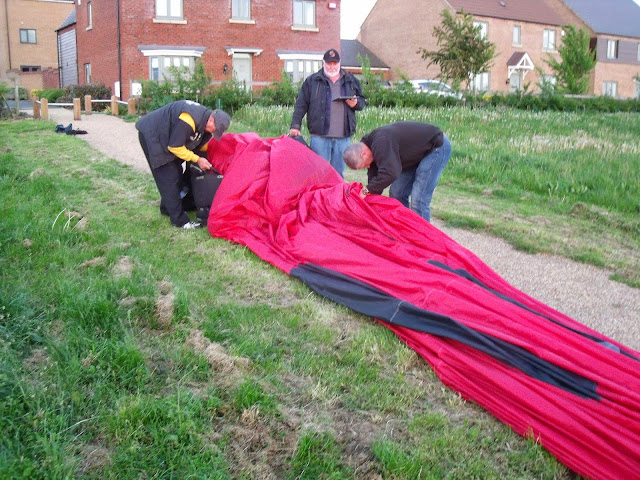 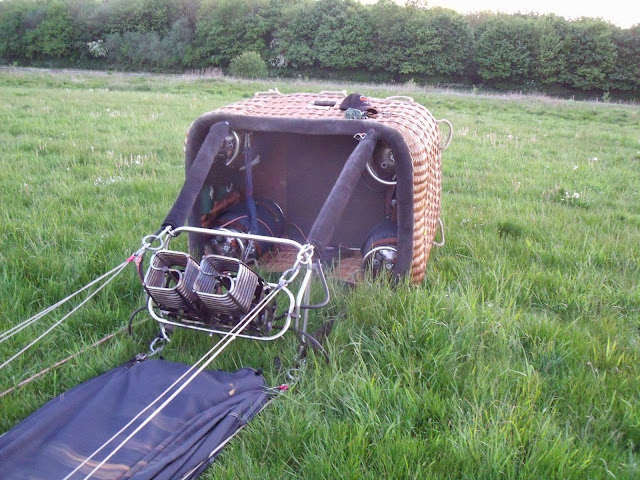 Four gas cylinders. I wonder what the range would have been. "Where were you heading" I asked. "Here" says he. "saw the field and decided to land"  Asking how far he had come I was shocked when he said Cosgrove Park. Just under three miles as the crow or in this case hot air balloon flies. "so where have the others gone" I asked. "Probably gone on to somewhere else". I got the feeling not only did he not want to carry on the conversation but he was also peeved. I think he had no choice as to where to land.
The canal is at the bottom of the field.

Cosgrove to the left and the landing site on the right. You can see the blue line of the canal passing the top of the right hand arrow.

Still a bit frustrated about the other lung needing treatment but hey ho it is what it is. We need to be around a railway station for a post op clinic appointment June 1st. plus we have something  being delivered so not in a great hurry. Running low on water we made a trip in the sunshine to Cosgrove and returned to Stanton where we have another 7 days left of our 14 day mooring right. Having contacted CRT and been told they would overlook us being in one area we could just not bother about moving on time but that is NOT our style.
Future plans are to head for Warwick and Birmingham and hopefully get the train back for the lung RFA when they give me a date which will probably get canceled and rescheduled.
Good thing is I feel great.