A Little of This, A Bit of That

"Find a place inside where there is joy, and the joy will burn out the pain." ~Joseph Campbell,  Author, American professor of Literature and Myth, 1904-1987

It has been awhile since I last posted. I am not experiencing a lot of inspirational things in life lately; just digging in with fingernails and hanging on. I've recovered from five weeks of Shingles followed a week later by a gall bladder attack that required emergency surgery to remove it, followed the next day by a second surgery to sweep gall stones from my bile duct. The pain was far worse than any labor pains I had and I hope to never hurt like that again.
Doors appear to open to me and then are suddenly slammed shut in my face. I've moved down to Pullman, Washington in October in anticipation of a job which I interviewed for and was told would be mine permanently in May--a contract leading up to May was signed, and then a registered letter arrived three weeks after I settled in, paid for a post office box, had all of my belongings brought down to a storage shed in Moscow, Idaho, and registered with a local GP and dentist, to say the offer had been rescinded due to upheavals down the line, etc. etc. so here I am getting ready to move again. To say I am tired, and depressed, and finding little joy in life is an understatement, however...
I have found a few things that delight me and so I shall share them in the hopes they might delight others as well.

1. As hurricane season was barreling its way across the Atlantic in August I came across a cracking good web app which produces a globe of the world and shows current wind, weather, ocean, and pollution conditions, as forecast by supercomputers, on an interactive animated map updated every three hours. It is a nifty thing to watch as the world's air and water currents move continually. Hurricanes, typhoons, or cyclones depending on where you are around the globe appear with pink to red wind and water currents. To view and download the web app, click Here. It has served as an invaluable tool in explaining British weather to Americans!

2. One evening I came across a video of a smashing group of musicians and singers. Post Modern Jukebox takes old classics, 90's Motown, hip-hop, doo-wop ballads of the 50's and early 60's, and modern songs by folks such as Bono and U2, Billy Idol, Sam Cook, Jackson Five, Roy Orbison, Elton John, Aerosmith, Guns and Roses, Beyonce and Rihanna, and reinterprets them in several different genres covering seventy decades of distinctive music styles such as ragtime, straight ahead jazz standards, gospel and blues, and doo-wop. Begun by Scott Bradlee, there are over fifty singers and musicians with whom he works to bring his interpretation of music to the world. You can visit PMJ's website for more details including concert dates in Europe, Australia, New Zealand, and the U.S. These are two of my favorites: Lovefool, and All About the Bass.


3. Another find during an evening of web surfing brought me to a page selling porcelain and stoneware, but not just any old pattern; no this is called Calamityware! The plates, cups, saucers, mugs, bowls and platters at first glance appear to be copying the Blue Willow style of chinoiserie so popular back in 1790 by Spode. Look closer though and astonishing shapes jump out of the blue patterning: robots run a-muck, dinosaurs lurk, pterodactyls swoop, sea monsters rise from the depths, the Kraken stretches out many legs, vortices spin, active volcanoes spew, pirate ships appear in the background, plagues of frogs rise from the shrubbery, Sasquatch runs across an open section of porcelain, and zombie poodles balance on their haunches! Should the money and the need for new dishware ever cross paths in my life again, this is the dinnerware I want! Calamityware also sells aprons, place mats, scarves, wall paper, sketchbooks and playing cards with various calamitous creatures on them. 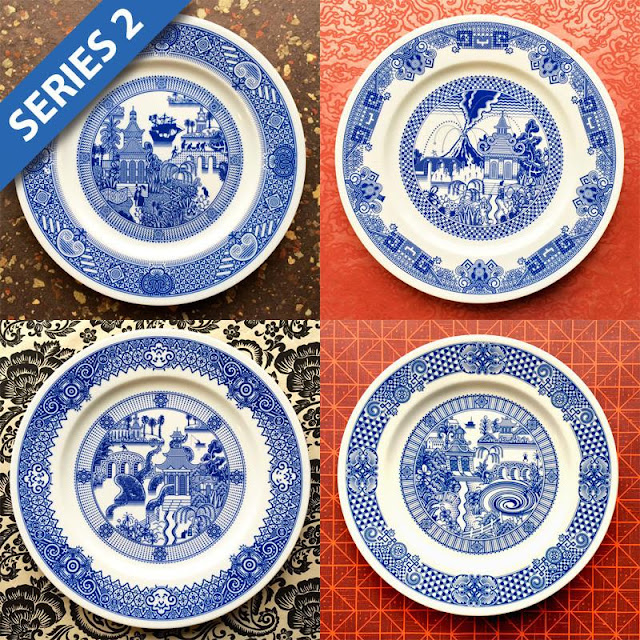 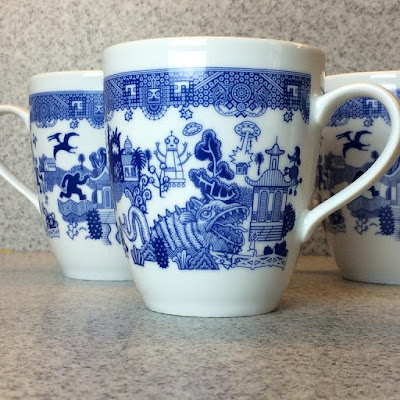 4. With my re-connection to Neill Public Library in Pullman, Washington I discovered a delightful new mystery author, Charles Finch. His Lenox mysteries run to twelve in number and take place in Victorian era England. Charles Lenox is a gentleman, son and brother of Baronets, educated at Harrow, and expected to follow his wealthy line into politics but he cannot stop his fascination with solving crimes and becomes England's first "modern" crime detective. This series is written by an American of privilege, educated at Phillips Academy and Yale University, where he majored in English and History. Finch also holds a master's degree in Renaissance English Literature from Merton College, Oxford. One would not know his American birth however as his books capture London and Victorian era England perfectly. It is only in book 11 Finch betrays his American heritage in print, but the clue is extremely subtle and only someone who is looking for it will find it! Below are the covers of the first four books in the series.

5. Food wise life has been topsy-turvy with several Crohn's flare ups over the summer and fall.  I've found two delicious items at the Moscow Food Co-op and both are available online in the USA anyway. The first is Karam's Garlic Sauce, a blend of garlic, lemon juice, salt, pepper, and love! 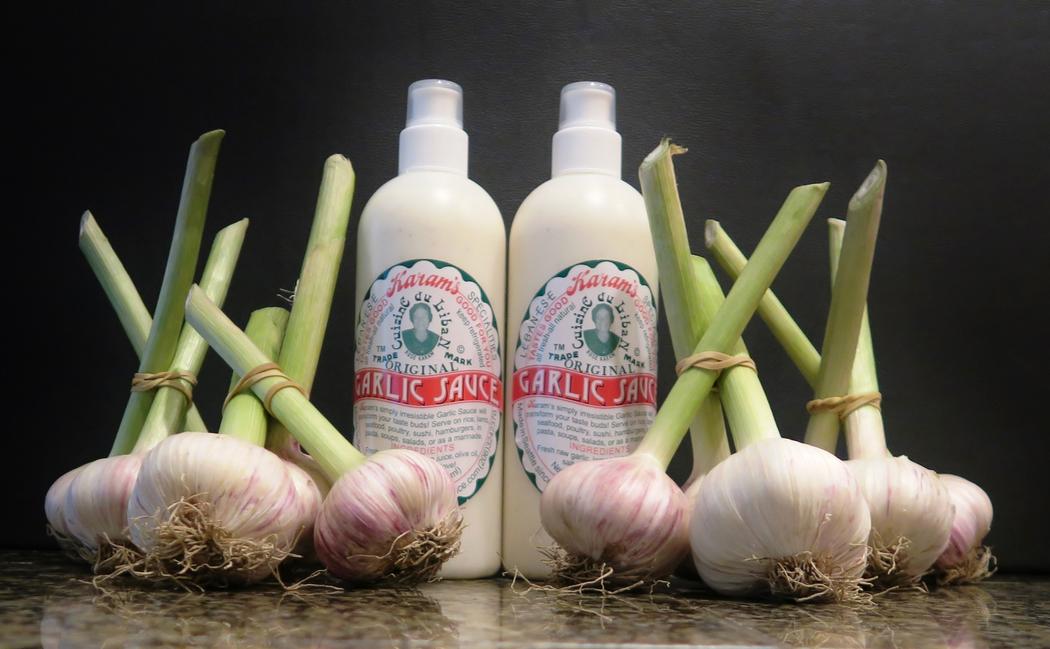 The second food item is an amazing organic smoked soft goat's cheese from Amatheia Organic Dairy in Bozeman, Montana. It is divine on crackers and soars when stuffed inside a chicken breast with afresh Basil leaf, the chicken then wrapped in Parma Ham or Turkey ham in my case, seared for 4 minutes on each side in a really hot pan of butter and then finished off in the oven for 15 minutes at 350 F. This cheese will carry to heights of rapture when spread on a bagel in lieu of cream cheese and topped with smoked salmon. Mmmm! 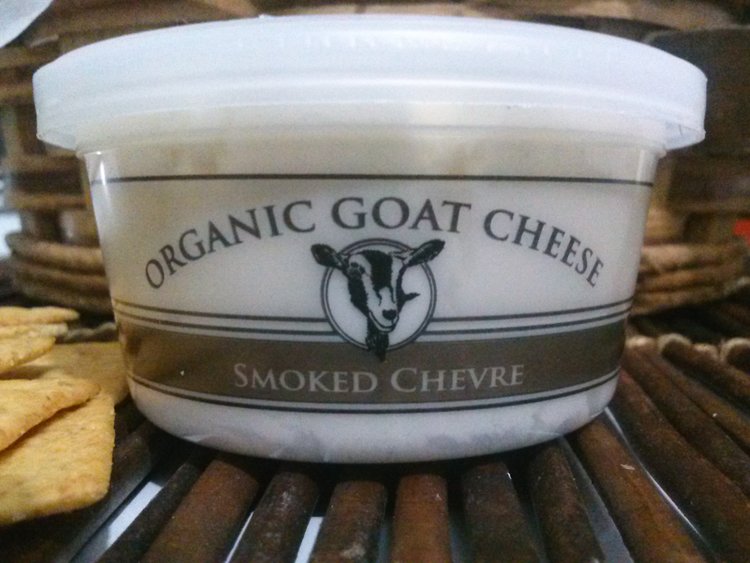 Finally, I learned this month something which I must share: the deadly side effects of the antibiotic Cipro or Ciprofloxacin. I am allergic to at least a dozen pharmaceutical drugs and most antibiotics. During the two days I was in hospital for emergency gall bladder surgeries, I was put on a continuous IV alternating Cipro and Flagyl until I developed an allergic reaction to them both, with red raised, blistered patches on both cheeks directly under my eyes, and on my nose which was swollen. I have been left with faint scarring on both cheeks--a pink streak as though a painter brushed both sides of my face with a daub of pink. While the surgeries took place on September 7th and 8th, I am still struggling for breath, although it has improved. I could not figure out why this was occurring.  Now I know it is a complication of Cipro use.
Last week I slept wrong and put the left side of my neck and some of my bones in my left clavicle out of place, developing Vertigo. I called the chiropractor I used to see when I lived here at Cloudhouse. He graciously squeezed me in and after looking at x-rays of my neck and spine, Dr. Carnahan asked me if I had taken any antibiotics recently. I told him about the Cipro and Flagyl and he said he couldn't give me an adjustment because Cipro causes a weakening of the tendons and a simple adjustment could tear a tendon in my neck causing me serious long term health issues. I was gobsmacked! Dr. Carnahan gave up his massage appointment for the next morning and I had a one hour massage that loosened things up enough for my bones to slowly move back to where they belonged. It turns out the Cipro can also damage one's mitochondrial DNA. Mitochondrial DNA is inherited from our mothers. It is the energy furnace in every one of our cells. This would also explain why I feel exhausted all the time, and have no energy. I seem to be exhibiting most of the side effects of this drug. Forewarned is forearmed. Now you know too and can advocate for yourself should it be necessary.
I will be planning my move to Gresham, Oregon between Thanksgiving and Christmas and hope to have a more uplifting post to share. Until then, I hope everyone has a lovely winter holiday--whichever one you celebrate. Bright blessings!
Posted by Mrs. Jaqueline Biggs at Wednesday, November 20, 2019 14 comments: