Hospice Care: What It Means to Us

"You matter because you are you, and you matter until the end of your life. We will do all that we can not only to help you die peacefully, but also to live until you die." ~Dame Cicily Saunders, Founder of the Modern Hospice Movement

"The term “hospice” (from the same linguistic root as “hospitality”) can be traced back to medieval times when it referred to a place of shelter and rest for weary or ill travelers on a long journey.  The name was first applied to specialized care for dying patients by physician Dame Cicely Saunders, who began her work with the terminally ill in 1948 and eventually went on to create the first modern hospice—St. Christopher’s Hospice—in a residential suburb of London.
Saunders introduced the idea of specialized care for the dying to the United States during a 1963 visit with Yale University.  Her lecture, given to medical students, nurses, social workers, and chaplains about the concept of holistic hospice care, included photos of terminally ill cancer patients and their families, showing the dramatic differences before and after the symptom control care.  This lecture launched the modern movement which resulted in the development of hospice care as we know it today." (National Hospice and Palliative Care Organization. http://www.nhpco.org/history-hospice-care; accessed on 09/25/16.)
"By the 1950s, social trends were changing and most people died in hospitals rather than in their own homes. This change reflected the growing number of treatments available in hospitals. The medical profession increasingly saw death as failure.
Cancer was the most feared diagnosis. Physical pain afflicted at least three quarters of cancer sufferers and appropriate painkillers were rarely used. Morphine was considered addictive and too dangerous."
In 1967 the very first modern Hospice was opened in Sydenham, London. "Led by Dame Cicely, St Christopher’s set out to discover practical solutions and to disseminate them widely. There were, of course, other hospices before St Christopher’s. These hospices were oases of dedicated nursing care for the terminally ill, but they were not what we now think of as modern palliative care. In contrast, St Christopher’s was committed to education and research, as well as excellence in clinical care.
This combination of science, care and sharing of experiences identified the opening of St Christopher’s Hospice with the start of the modern hospice movement. A holistic approach, caring for a patient’s physical, spiritual and psychological well being, marked a new beginning, not only for the care of the dying but for the practise of medicine as a whole." (St. Christophers. http://www.stchristophers.org.uk/; accessed online on 09/25/16)
In 1969 Dr. Elizabeth Kubler-Ross wrote her groundbreaking book On Death and Dying. Based on interviews with 500 dying patients, it is their experiences which Kubler-Ross distilled into the five stages of death and dying: denial, anger, bargaining, depression, acceptance. These are the emotional stages one usually experiences in the loss of a loved one.
Les and I experienced shock at this diagnosis, anger about former medical treatment which we feel has brought us to this point, and we jumped right on to acceptance. This was possible because of my previous experiences with death and dying.
As a former Hospice volunteer I know from personal experience the one major mistake people make when faced with a life limiting or terminal diagnosis is allowing denial to drive their thoughts and choices. This shuts one off from seeking assistance at a time one needs it most. Too often people wait too long to contact Hospice when it is the first contact a terminally ill patient and their family needs.
I have seen Hospice care dramatically improve the quality of life for patients to the point they were able to leave , having gained insight into how to engage in better self-care, and how to actually live and enjoy life in the face of terminal illness.
But Hospice is not just for the terminally ill; it also exists to help immediate family and care givers, providing support for those who so desperately need it in the face of overwhelming emotions, endless care giving, and consistent feelings of helplessness and sadness.
There are generally two types of Hospice care programs: inpatient where the terminally ill person is provided a room in a hospice setting which provides on-site medical care and around-the-clock service; outpatient which brings hospice into the home of the patient, allowing those who choose to do so, to die at home in familiar surroundings.
What does all this mean for me and Les?
It is Les' wish to die at home, on our boat, with me by his side. We shared this with our GP, and she referred us to Rennie Grove Outpatient Hospice. We had a wonderful initial meeting with Nurse Jenny who was at first surprised and then relaxed about our very frank and straightforward approach to death and dying. Now that we are hooked into the local Hospice program, a Hospice nurse visits us at home every other week and we have one phone number to call at any given moment should a need arise--it matters not if it is morning, noon, middle of the night, weekends, bank holidays or Christmas. The 24 hour a day reception service takes our information and a Hospice nurse calls us back within ten to fifteen minutes. They liaise with our GP and the local Visiting Nurses, who come and see us on the weeks in between the Hospice nurse visits.
What this means for Les is that his pain levels are consistently monitored by the nurses--some of whom can prescribe meds and others who contact our GP or the Hospice Palliative Care Specialist physician to ensure Les has always got the appropriate medications for his situation on hand.
It means that when Les felt as though his legs were going to give way in the shower, a call to Ian Rennie and a chat with a nurse resulted in a hospice occupational therapist visiting our boat, measuring our bath and ordering a shower seat which fits our tiny bathroom and our needs like a good glove.

It means that when Les' stoma blocked up last week at 3:15 am, leaving him in pain so acute all he could do was cry and moan, I had someone to call. A Hospice nurse came straight away and gave him an injection of Di Morphine to take the edge off his pain. After conferring with her, I called an ambulance which took Les to the local A & E.

A little medical and continuing the original cruise.

So after all the talks of Stanmore Orthopaedic getting involved and waiting on records of  just what amount of radio therapy I had back in 2013 it seems that I can have no more as the limit was almost reached in 2013. As for Stanmore`s involvement they are reluctant to do a biopsy because of my reluctance to undergo chemo therapy treatment.

So back home with MST prolonged release morphine sulphate tablets every 12 hours that seem to have the pain under control.

Since being back I did get a bit adventurous while under this pain free umbrella and ventured out two days running and ending up in great pain with the result Jaq had to phone the 24 hour on call hospice nurses.
Having noted all the relevant figures, of not just my MST  but also the extra Oromorph consumed over the past 24 hours, within 10 mins the exact dose and timing was relayed to Jaq and within an hour calm was restored.

This was followed by a visit the following day from a hospice nurse who was also a prescribing nurse, and I always thought only doctors could prescribe drugs. After a phone consultation with a consultant at the hospice the prescribing nurse decided to slightly increase the MST and put me on Steroids for a short time.

All I can say is it has been a 100% success with my feeling pretty much wondering if this 6-12 month prediction of my life expectancy has any foundation. Anyway just have to take it as it comes and I have no doubt Mr Cancer is working away in the background however good I might feel.

Back to the cruise that had to be terminated, just like me, and we  have turned onto the Trent and Mersey at Fradley junction. 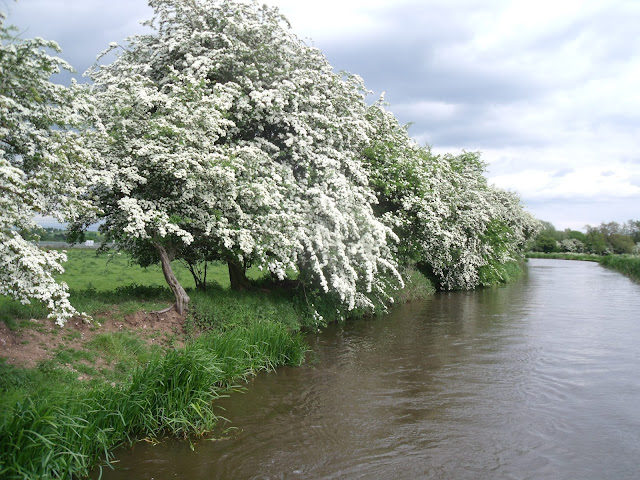 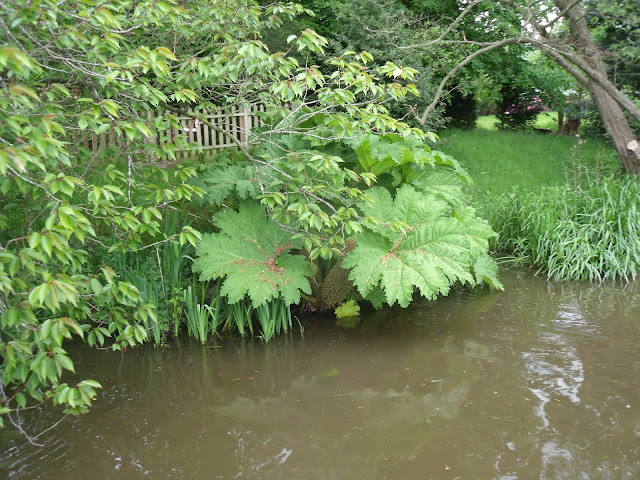 Now heading towards Great Haywood and the Staffordshire and Worcestershire canal to spend a few days of relaxing and giving what we thought at the time was a very severe back problem. Having tried an Osteopath back in Hinkley Jaq was looking ahead to find another or perhaps a Chiropractor. Penkridge was some 10 miles ahead and about 6 locks so a good rest and hopefully between us we can find a solution there. 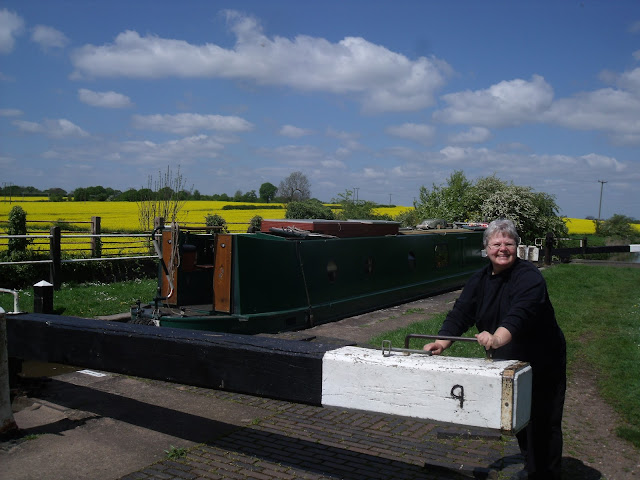 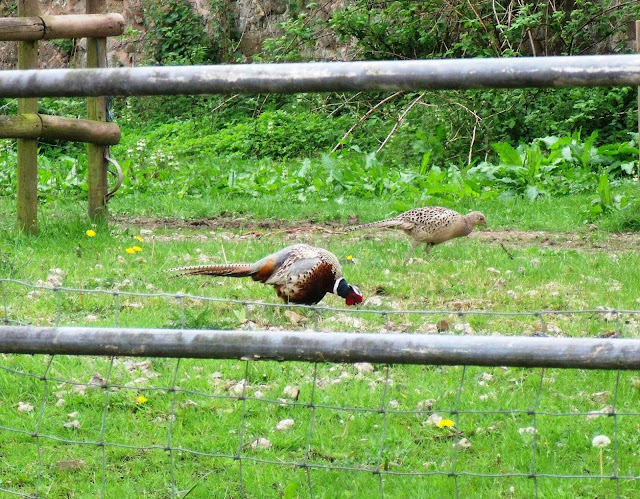 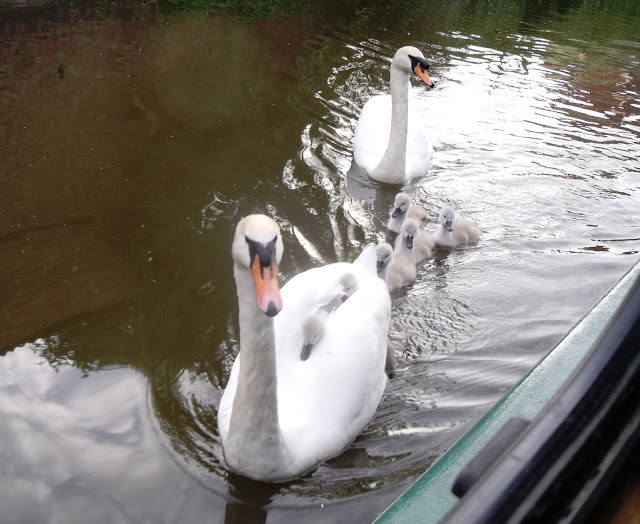 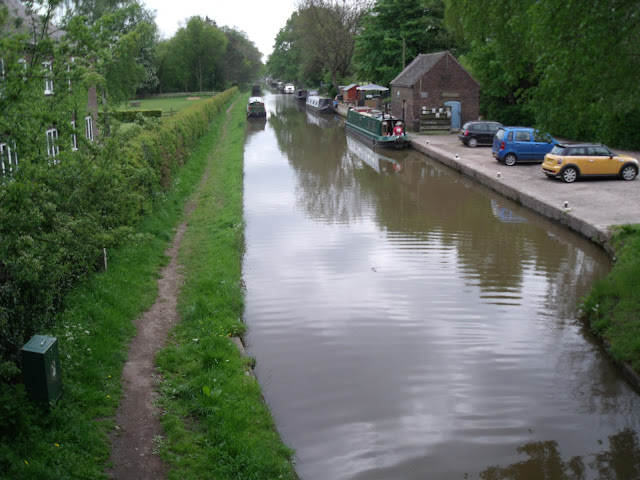 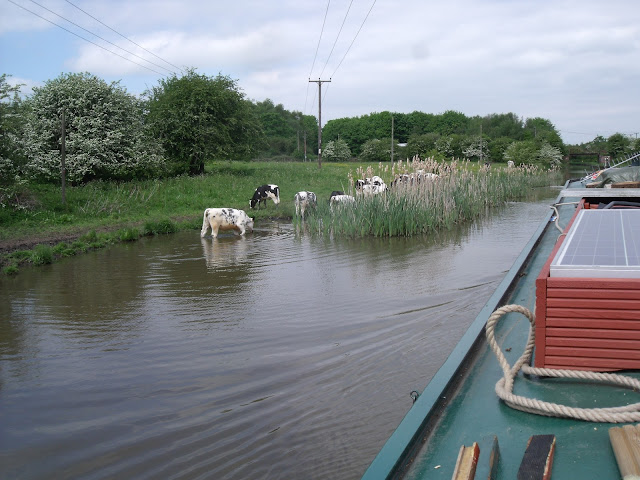 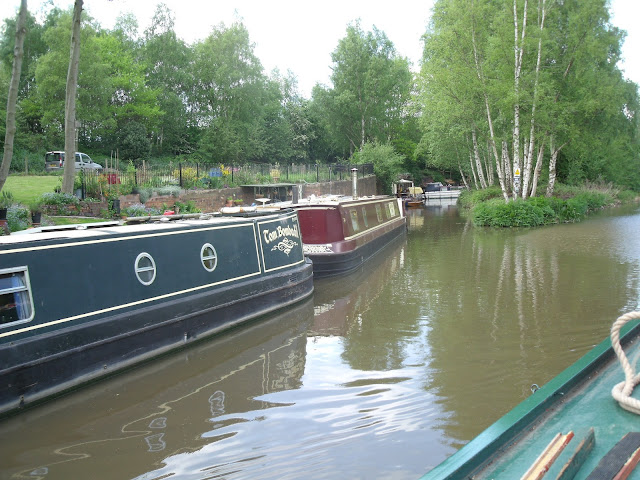 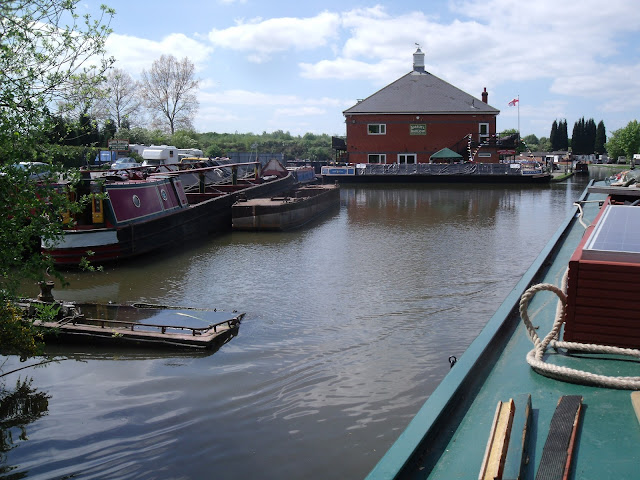 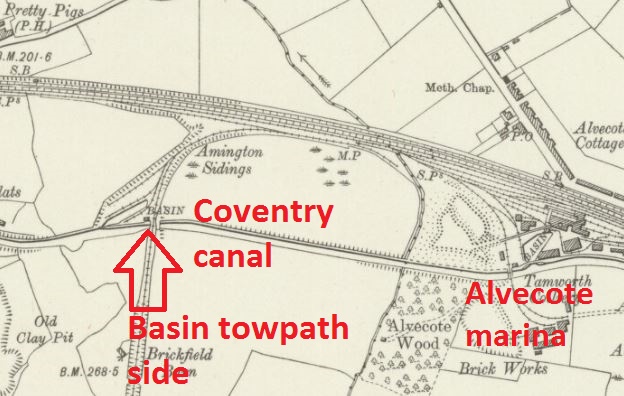 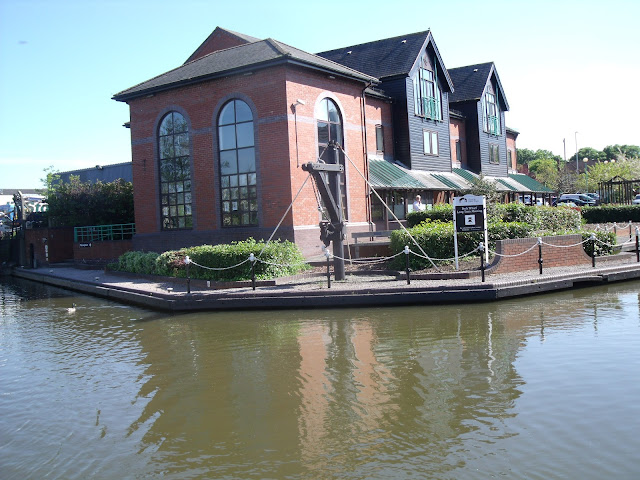 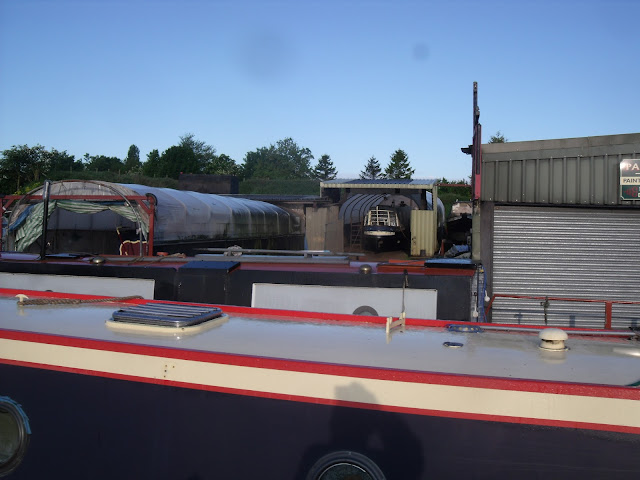 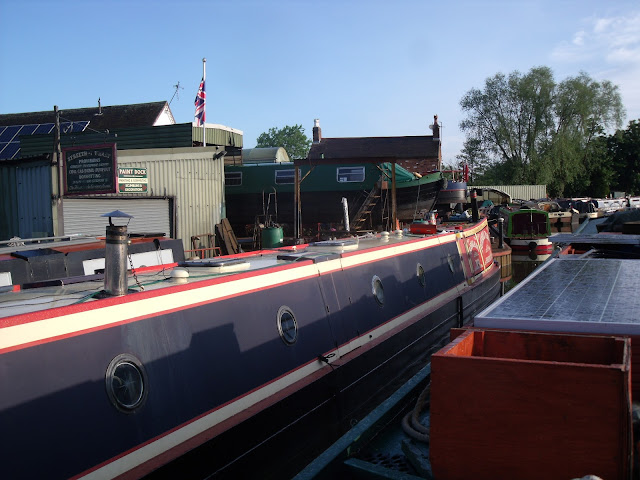 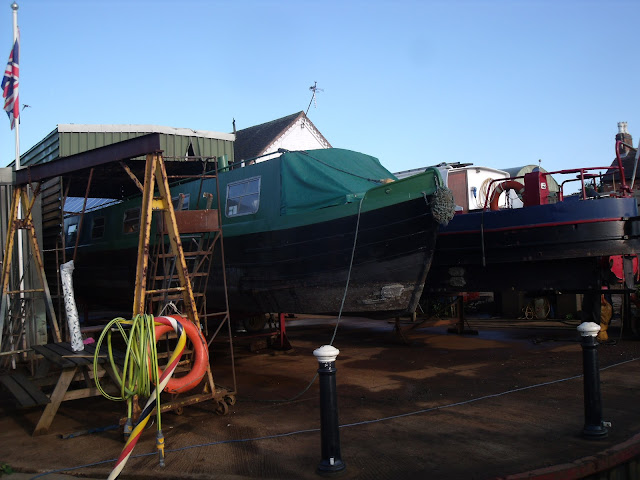 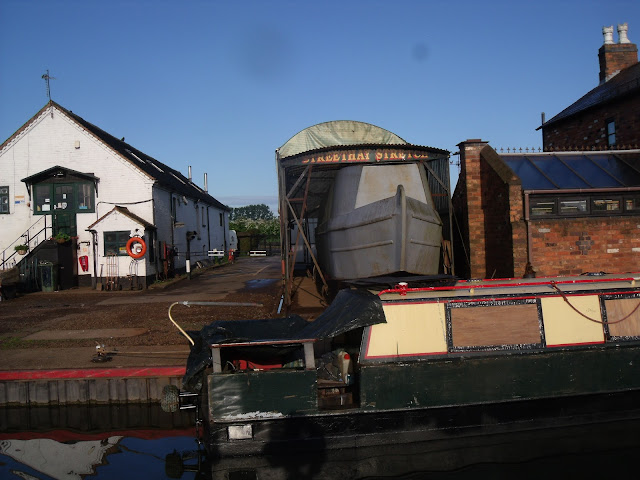 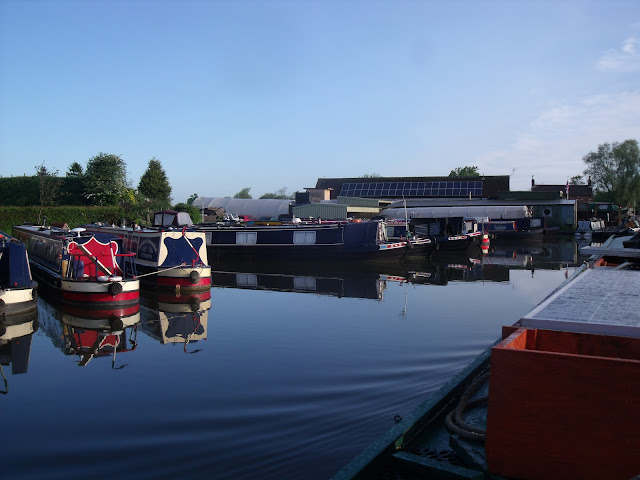 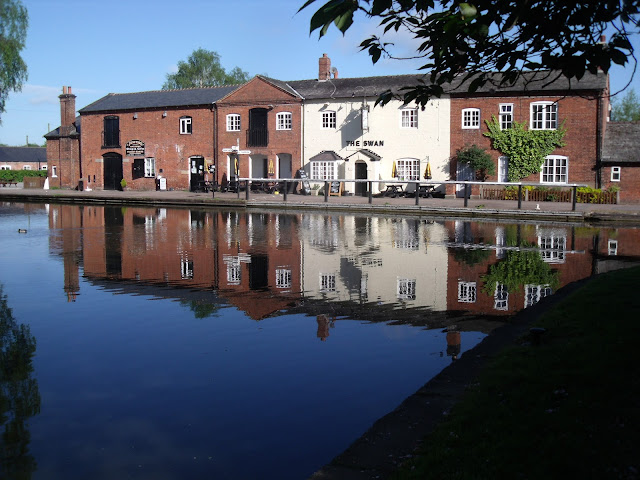 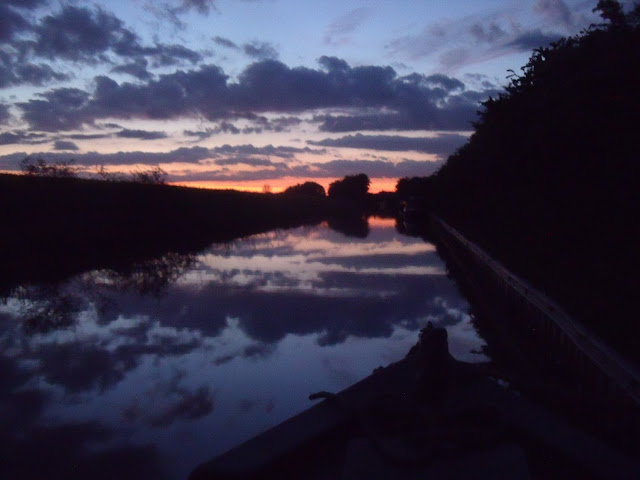