"Flutter your wings frail bird, and rise an inch above the impossible." ~Anonymous 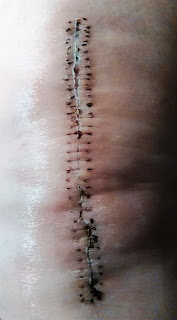 Still in the five mile prison but time is passing quickly and it`s now three weeks since Jaq`s surgery and one week since the 40 plus metal clips were removed.
It`s also just over a week since I attended the funeral of Valerie`s sister Pauline. Two lovely ladies gone from the lives of so many.
While I was gone the Physio came to the boat and was very impressed with Jaq`s progress and especially the amount of bend in her knee she has achieved. No more boat visits and with just hospital physio appointments in the gymnasium we decided to head for the open fields of Radford Semele. We can cruise back to the hospital for water and appointments as and when we need to.


About once a week we cruised up to the Cape locks for water and being able to swing the boat around had no need to go through the two locks. However as Jaq mentioned we needed coal so one trip I had to go back to my single handed days and take us up through the locks. 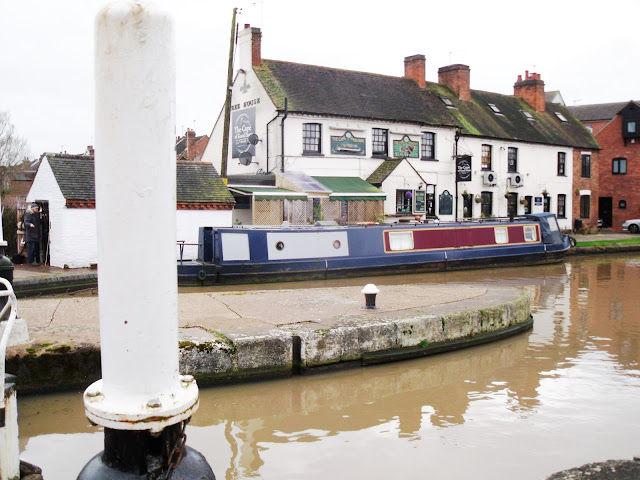 At the second of the two cape locks is the Cape of Good Hope pub. 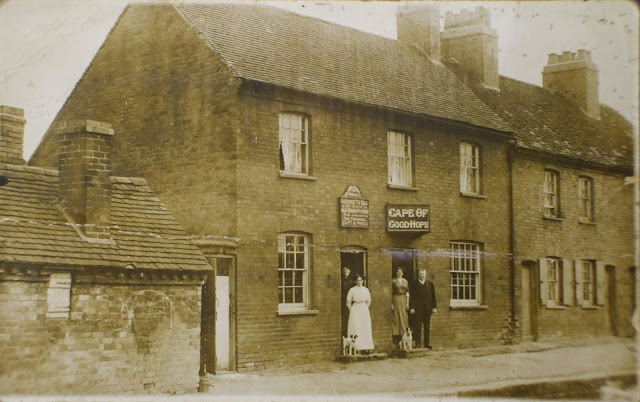 Here it is courtesy of Warwickshire records office around 1900. The original pub was the first building with the second section being cottages. If you look at the modern day picture notice the end of the building is not painted White. This is a private dwelling with an entrance at the side. It appears the pub was unable buy all the cottages and this one, of  I think four originally, is the sole survivor. I do wonder though why it`s door is at the side. 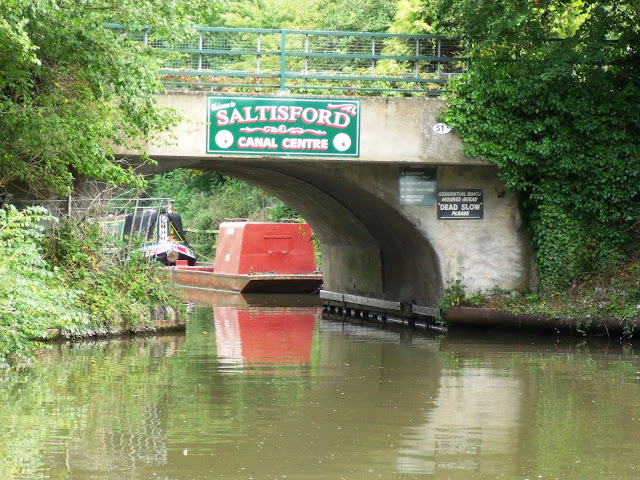 Less than half a mile past the pub is the entrance to the Saltisford Arm that was when built the terminus of the Warwick and Birmingham  canal. It is now a registered charity that welcomes not just boaters but local residents who have daytime access to the gardens and canal bank. 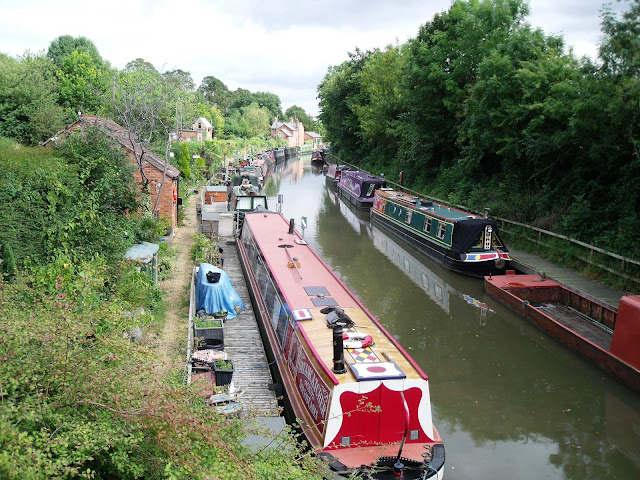 Just a boat length from the bridge the building on the left is the coal store. I would say what you see here is about a third of the original length.
The building in the far distance is next to the winding hole(turning point) that can be seen in the Google shot below.

In the Google shot above you can see on the extreme right the end of the arm where it meets the railway. Notice just above here the Dun Cow pub and note it`s position on the old map below, showing the original canal terminus, to get some idea of locations. A is the bridge at the Saltisford canal trust entrance. 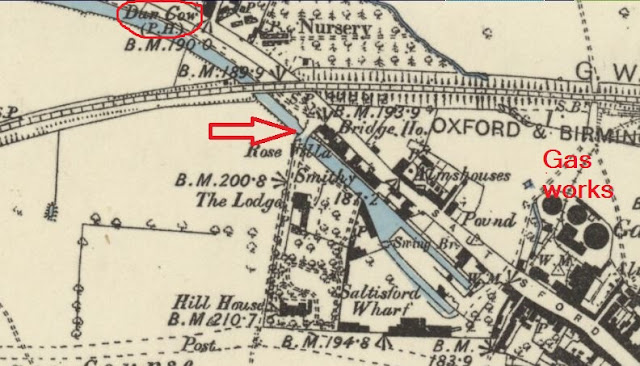 The Birmingham-London railway line still crosses the canal and if you walk under the rail bridge the one remaining piece of the canal can be seen, a bridge, arrowed is now the access to residential homes built on the site.
Below the present day Google view south of the railway line. 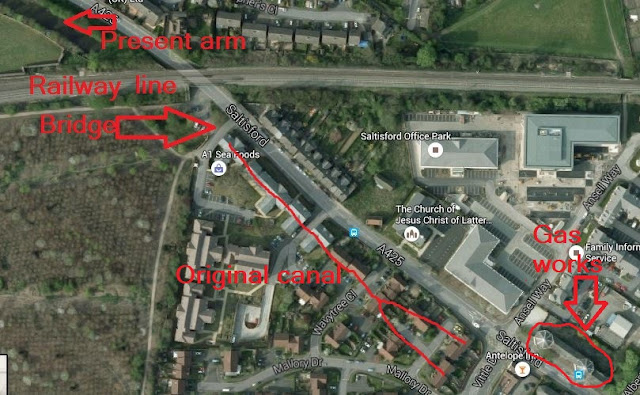 All that`s left of the Gasworks built in 1822 is the front. In the picture above Google shows  two white circles these are the octagonal buildings that held the original gasholders as pictured below. 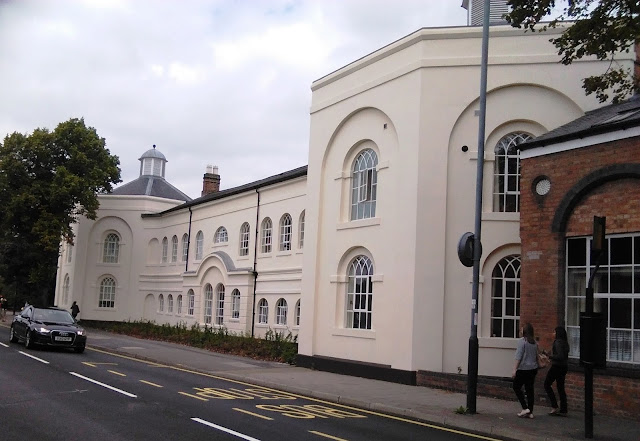 Saltisford Wharf was the terminus for the  Warwick-Birmingham  canal. This was then joined to the Warwick-Napton canal that in turn met the Oxford. In 1895 the Warwick companies merged to form the Grand Junction that became in 1929 the Grand Union.
The Saltisford trust is a great mooring to visit Warwick. Five minutes walk past the gasworks and your in Warwick centre. First night mooring in the arm is free and there is electric hook up and water if required plus usual boater service block.

"What ever doesn't kill me makes me stronger." ~ Nietzsche

This is the first time since surgery that I have had the energy to go online. My days are hemmed in by exersices every two hours and walking the length of the boat repeatedly. I grab snippets of sleep when I can. I spend a lot of time thinking about my sister Susan, who had both knees replaced at one go. She is my hero.

Nights are hardest because there is simply no position that is comfortable for more than mere minutes. It is also the time, other than when doing exersices, that pain strikes. Each day brings improvements. I don't wet myself now trying to get my legs under me and move at a snail's pace to the toilet before my drug addled bladder gives way. I have learned to pace myself, and my left leg has taken on an independent life of its own--as though it is an individual with its own agenda. I catch myself asking, "What does the leg want now?" Ah yes it wants some of those deep bending exersices to loosen the stiffness; it wants to stretch out straight, etc. etc.

The Eskimoes have over 150 words to describe snow and ice. It has occurred to me that there are at least that many words for the different type and dagree of pain. There is the sharp-deep stabbing pain that takes my breath away. There is bone deep pain, solid as granite, that makes me grunt. There is the pain that comes with repetitive exersices that settles into my gut like a fist and makes me nauseous. There is the short, hot prickling pains as nerves remember themselves and fire up again. There is another pinching pain amongst the staples enclosing my incision. There is a weird flowing pain that moves around the ends of my femur and tibia, like some skulking thing looking for a place to settle.

Through it all Les is my shining star. He is patient and kind. Les can lay his large, rough man-hands, hot with life pulsing energy on my leg and the pain dissapears. His love for me is a HUGE blanket in which he has wrapped me snug and safe. The job of caretaker is exhausting, and while Les says I am easy to look after, it is all the other daily activities combined with caring for me that knacker him out: cooking, cleaning, laundry, bringing in coal, etc.  etc. I am not used to sitting still and doing nothing. It is maddening, and it feels odd to be on the other end of this stick.

Friday morning it was time to go for water. We also needed to buy more coal. Les took the boat up through both Cape Locks single handed, filled the water tank, put on a load of laundry, fixed lunch, then we cruised into the Saltisford Arm to get coal. After he loaded ten bags of coal on the roof with Ian's help (Ian manages the daily operations of the Saltisford Arm Trust) Les took us back down both Locks and moored up to walk in to a nearby chemists and get my pain med refills.

Back he came, livid with anger as they could not find the prescription, and all the chemists were at lunch. Away he went again at 2 pm and the problem was that while the bright young thing at the doctor's surgery assured me it would be easy to have the prescription sent to the chemist electronically, and the doctor I spoke to over the phone assured me of the same, my prescription was for morphine--a controlled substance which cannot be sent electronically. Bless the chemist's heart; she drove down to the doctor's surgery and picked up the prescription in person and called Les when it was filled. Les walked back in a third time and came back with drugs in hand. We had been going since 9 am and it was 330 now. Time to shove off and cruise down to the Tesco moorings, which took about forty minutes.

I had drawn up a grocery list, such was the extent of my capability for the day. Les went off with the trolley and came back an hour later with food. Then he went back out and took a jerry can on the trolley over to the Tesco petrol station, filled it up, and schlumped it back to the boat to top up our diesel. Back inside, Les worked while I directed his efforts and we finally sat down to a mouthwatering dinner of ciabatta pizzas. Les adjusted the aerial and we sat together watching telly while the forecast driving wind and rain lashed outside NBV. Those who live aboard know one has to move when a weather window of opportunity allows in the winter. We spent two nights there and took the chance of a break in the storm fronts off the Atlantic to cruise to the winding hole near Aldis while washing a couple loads of clothes, and settle back on the hospital moorings again yesterday. Les had just got us moored up and the TV aerial in place, the coal bucket filled, and two bags of wood tucked near the stove to dry when the sun disappeared, and winds and rain returned with a vengeance.

Today Les is off down south, three trains, to a family funeral in Watford. I am on my own, snug and warm with all my needs thoughtfully addressed before my Best Beloved went out the door into the dirty weather at 8:10 this morning. He won't return until late tonight, but Les made a delicious pot of stew yesterday which will warm him up this evening. I am waiting for the physiotherapist to come and take me through me exersices.
Thank you everyone for your good wishes, loving kindness, help, prayers, positive thoughts and healing energy sent our way. It is all working!! P.S. Physiotherapist just left after telling me I am a star patient and my progress is brilliant! Woot!

A bit of help needed

Jaq is making good progress but finds the exercises grueling but appreciates they are the answer to getting fully mobile.
Pain seems to be easing as she finds the need to take less of the Morphine liquid to back up the regular pain meds so that is a sign things are improving.
The 40 staples closing the incision closed are to be removed Tuesday next so another step up the ladder to recovery.

We have had friends, readers and fellow bloggers, you know who you are, help with things like diesel and gas etc and offers from many others. A big thank you to every one of you.

Now a bit of help for two blog readers who have E-mailed the request below. As Jaq or I have never ventured along the K and A we are at a loss to give any advice to Betsy and Ian so fellow boaters and hirers help is needed.
If you offer advice via comments I can publish them but if you have any lengthy suggestions use my e-mail and I will forward them on.
Any links to boat companys will make life easier for your fellow readers.