Over the years I just like many others have tended to pass through Milton Keynes. It `s understandable because of the colossal amount of housing canal side and the many, about nine,  huge concrete road bridges crossing the canal.
It certainly is like boating through a city albeit a newly developed one. In fact it`s not a city but a county.


Apart from the bridges and the housing there are times when the housing disappears and you would think you are cruising through open country side. Circumstances of late have caused Jaq and I to be in the area for longer periods than we prefer to be in one place. Having moored in a few different spots hopefully others might read this and see the county of Milton Keynes through different eyes. 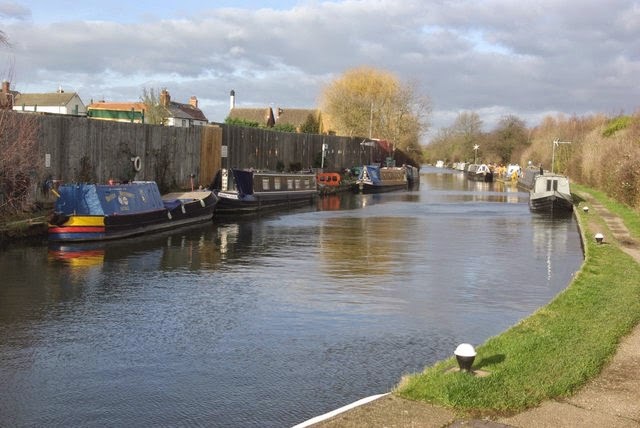 This is Fenny Stratford visitor moorings. Very handy for shopping and trains. Around the bend a few end of garden moorings and a lot of housing hardly make this  a peaceful mooring with nice views but there are nice walks.
I will leave you to Google the shopping but briefly of interest to boaters might be Tesco, on two floors, Halfords, BQ, Asda, Ikea, Screwfix and Toolstation. 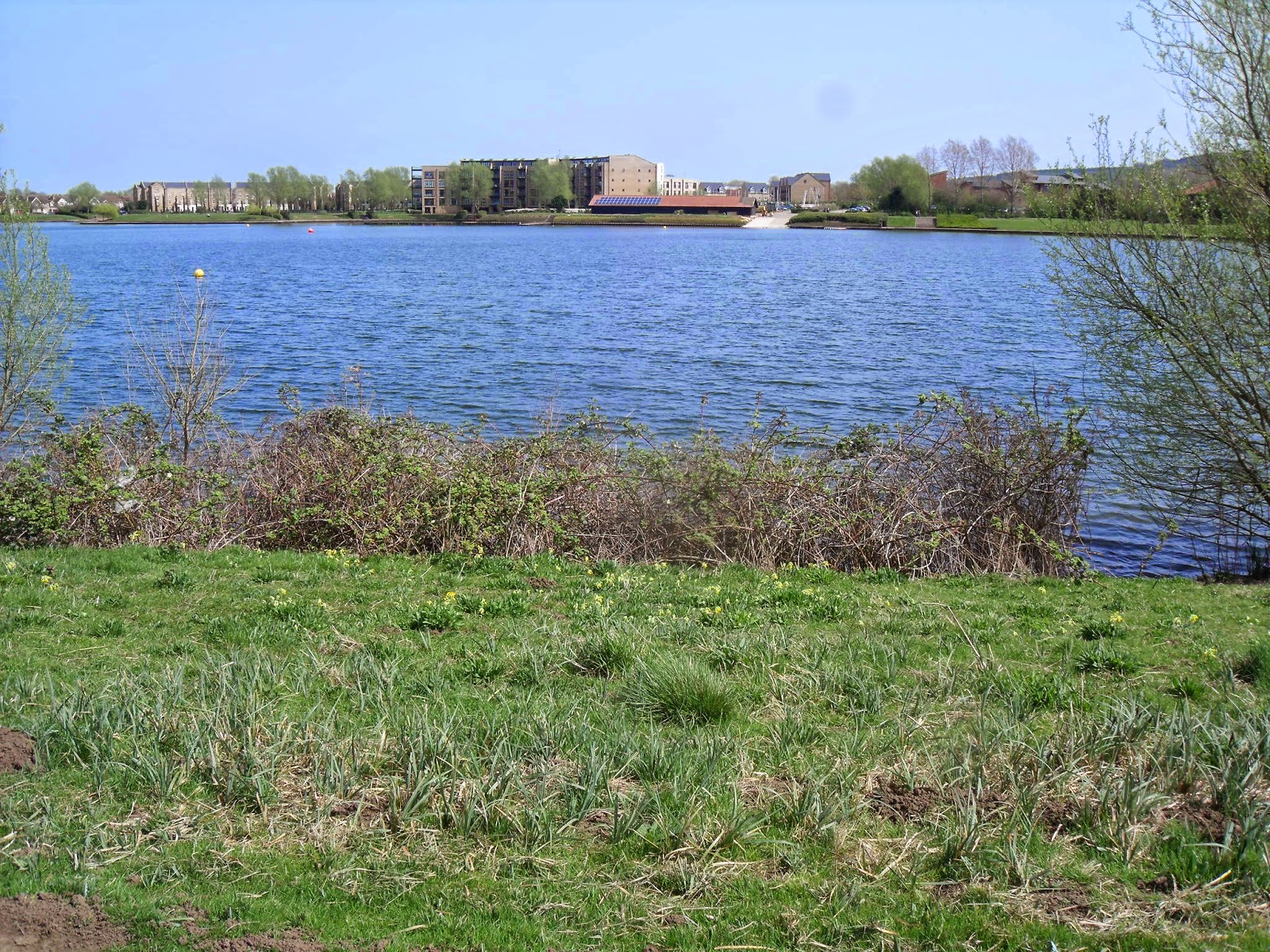 Walk back to the lock at Fenny and follow the footpath off the towpath to Caldecotte lake and in less than 10 minutes this is the view.

Follow the lakeside path to the left and you will find the Caldecotte Arms. For a circular route, from the rear of the pub walk to the weir and you can access the canal near Simpson and return to Fenny via the towpath. 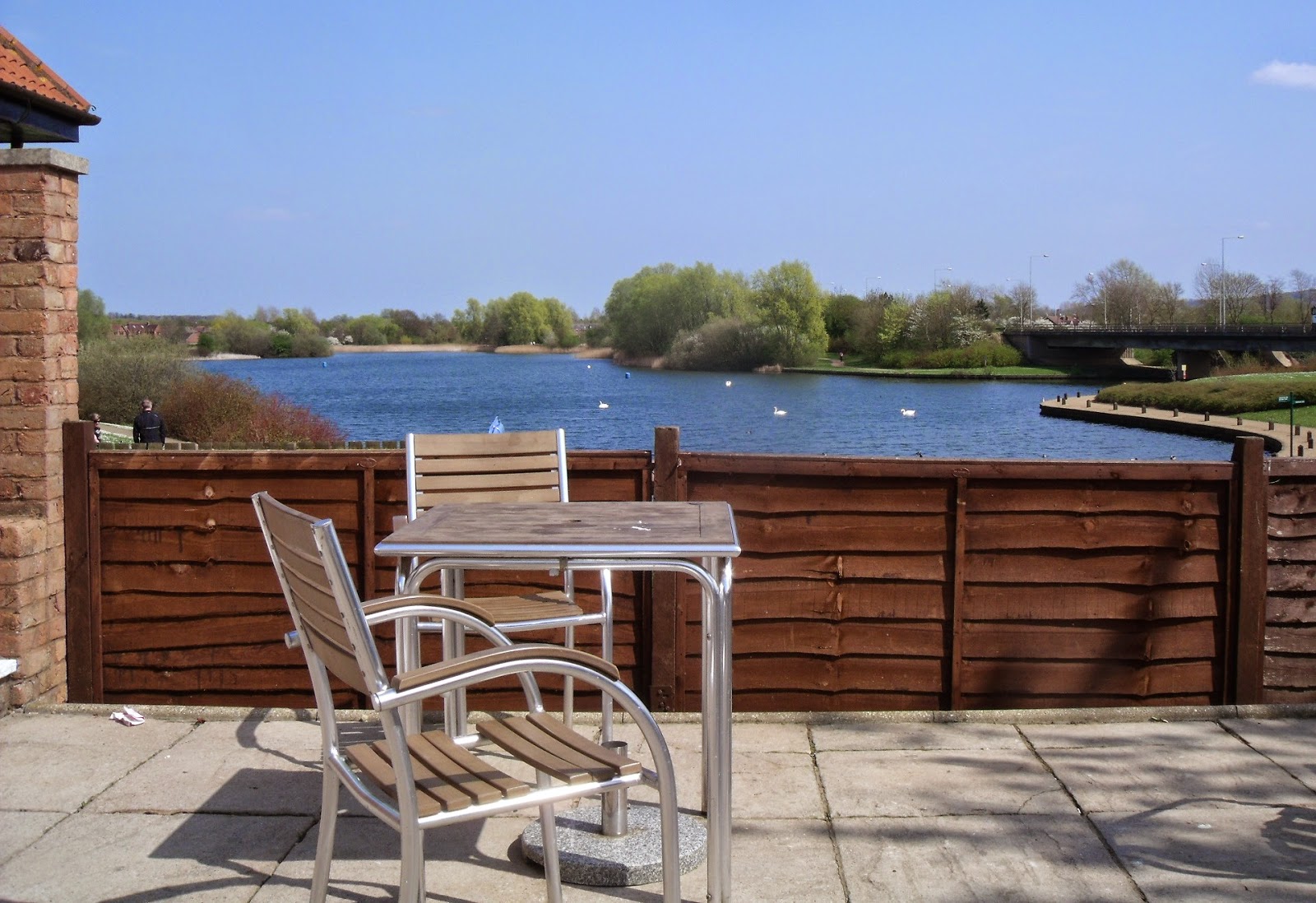 Completely out of the Blue we decided with a view of the lake an alfresco lunch would be nice. 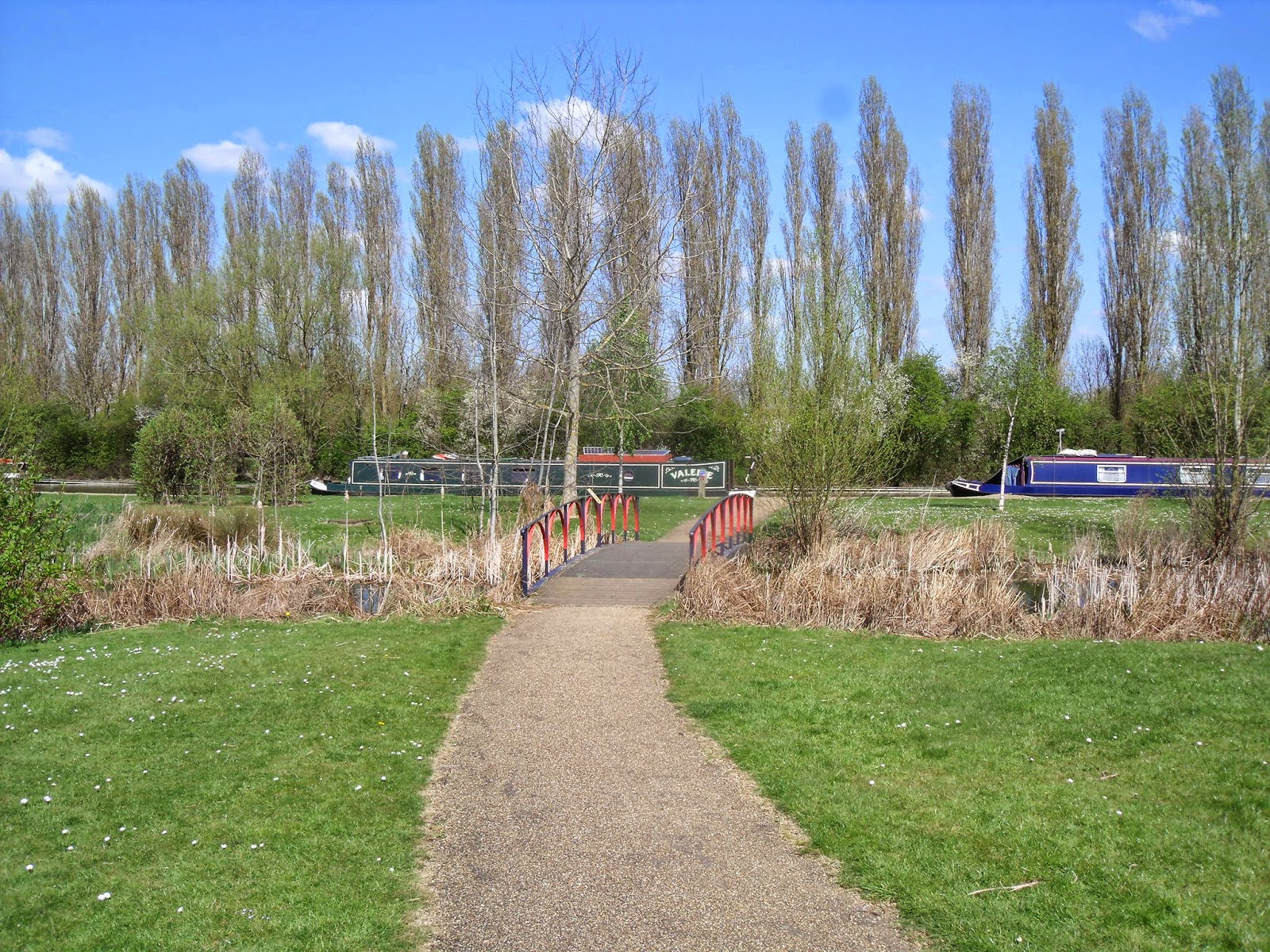 Campbell park moorings  are 48 hour and managed by the Parks commission. a nice walk through the park will bring you into central Milton Keynes with it`s 240 stores and restaurants. We like the  fruit and veg stall in the open market. 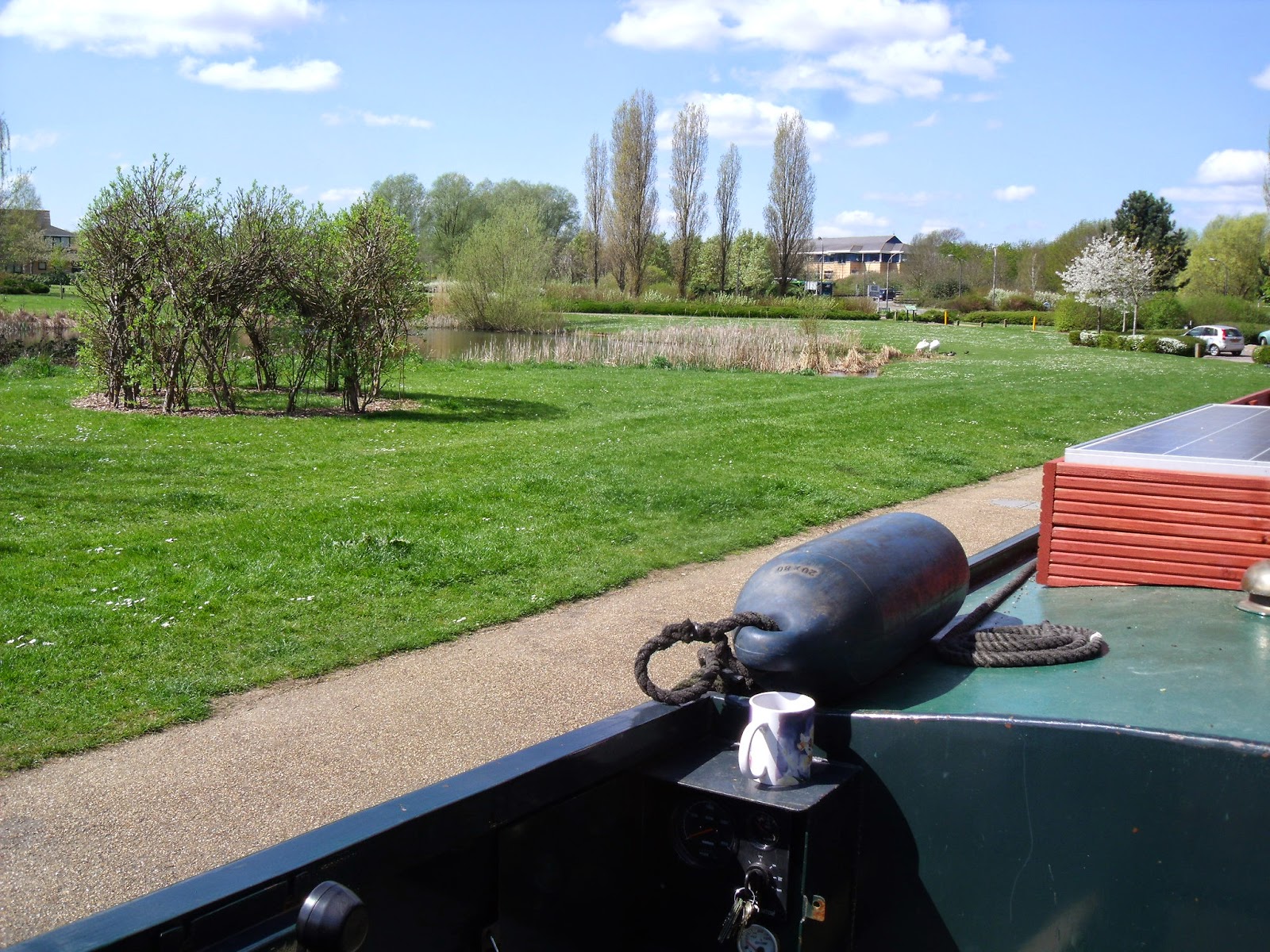 Five minutes walk and there are buses for all destinations. Very popular with joggers, walkers and bike riders but very nice for a central mooring. Only about four moorings here although you could moor opposite on the towpath and perhaps a gap will appear.

A lot of art in Campbell Park so I will just show some on our walk into the shopping centre. On the map top right is the Circle of Dance that Nb Valerie is pictured moored by above. The Head is to the left of our mooring. A choice of two routes into town/city/county or perhaps one in, one out. We walked in following the top path that runs past Chain Reaction. The route from the Head will take a higher route but both terminate at the MK Rose. 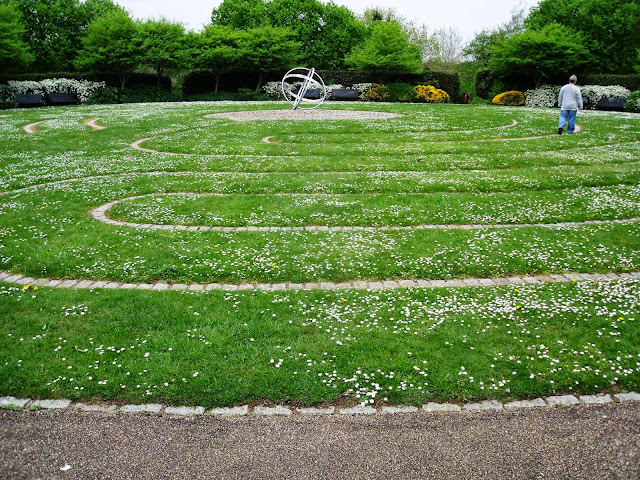 The Labyrinth, Jaq is walking, with the Armillary Sphere at it`s centre. 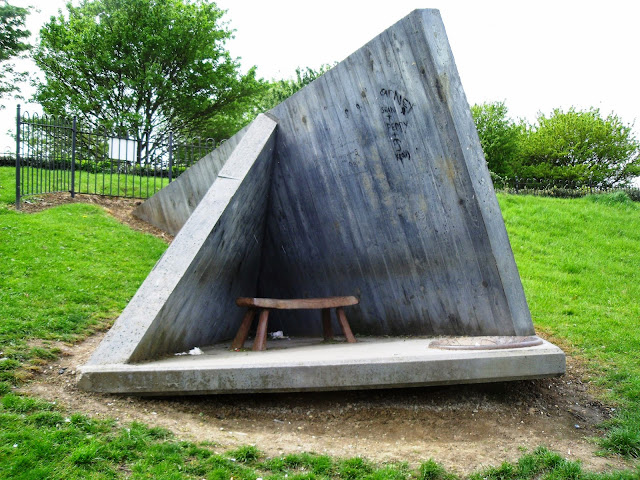 The Cave created to provide visitors with a resting place........... 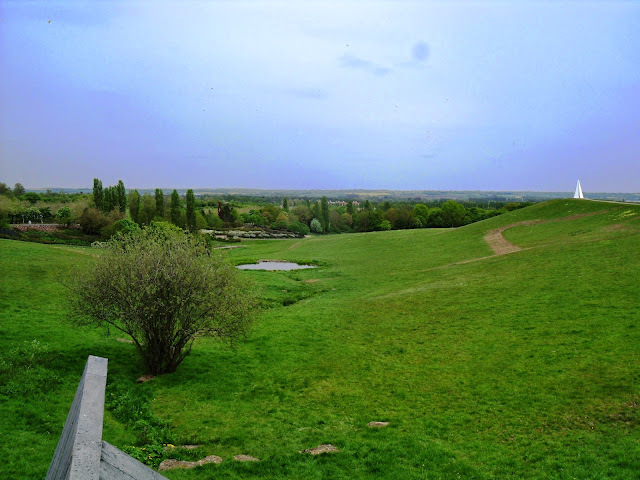 .............giving visitors a panoramic view. Well I agree with the latter but perhaps if the cave was bigger and had extra seating it would be a great place for walkers to rest up. I would have liked to see a large cave like structure set into the hillside. Thinking about it a 72 foot ex. working narrow boat with the whole of one side removed, seating in the cargo area with cloths in place for shelter would be better. The Light Pyramid can be seen off to the right. 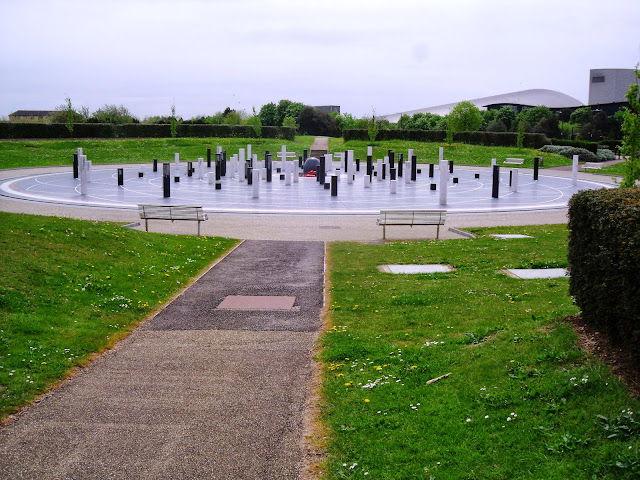 This is the MK Rose. LINK 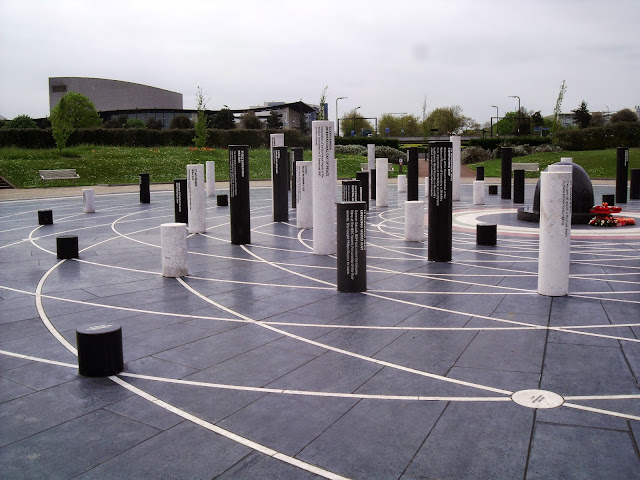 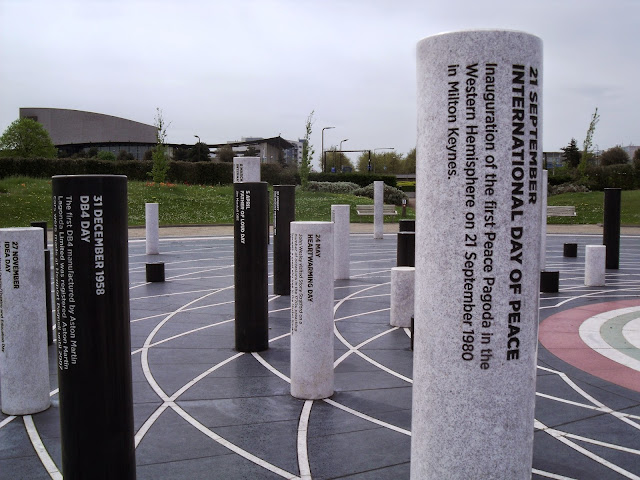 A footpath almost centre of the picture is the entrance to the city county centre and 240 retail outlets. If that unsettles you then turn around and return to the quiet of the canal via a different path. 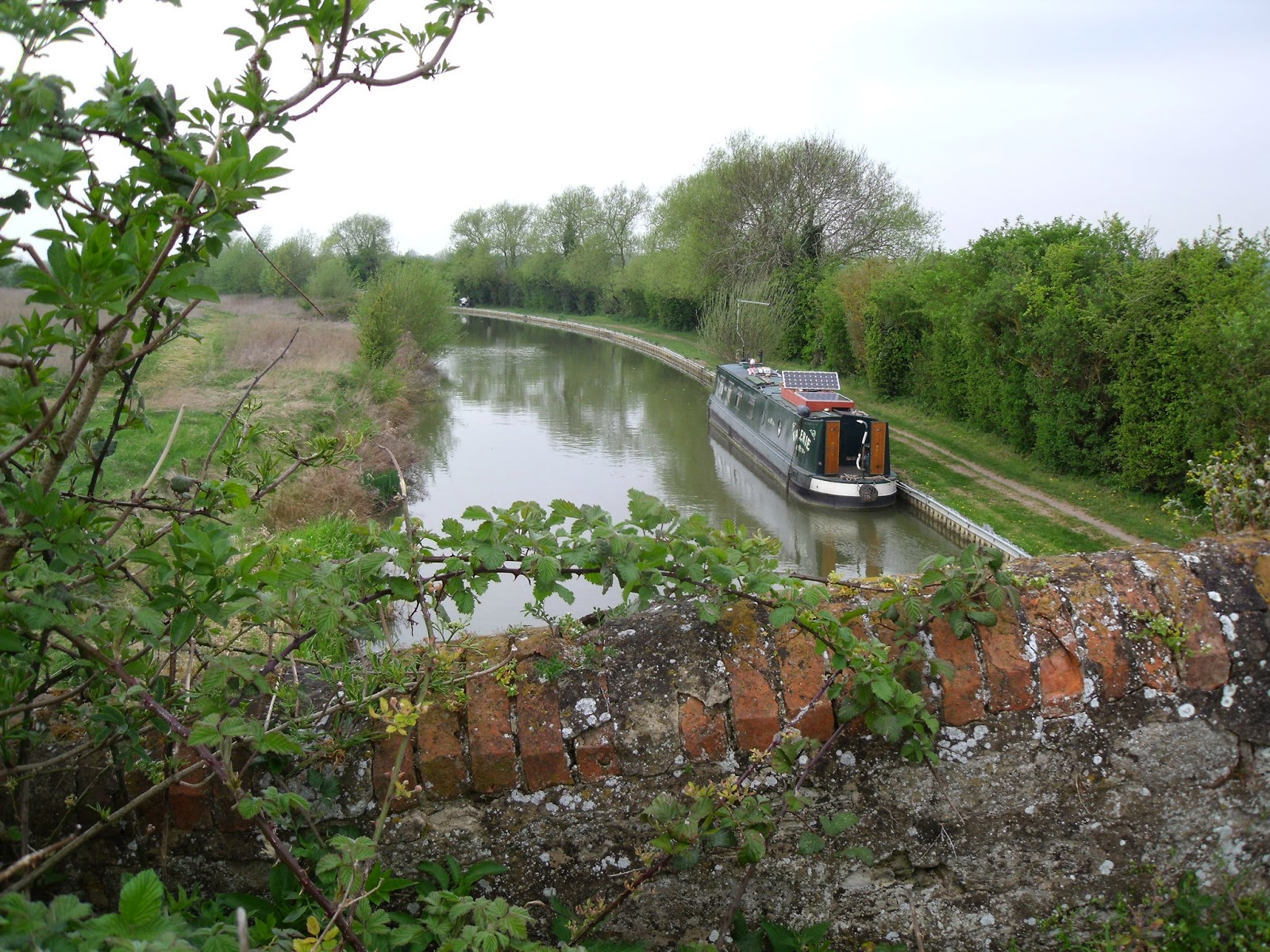 One of our all time favorite moorings in Milton Keynes is Stanton Low. This section is adjacent to bridge 75. Just a short walk across the bridge and a good bus service is available to MK or Wolverton. As I publish this post we have just returned here and it is full of boats. Never mind at least we have the exact same spot and with the bush growing up in front and the proximity to the bridge we do have a nice spot with others not to close. 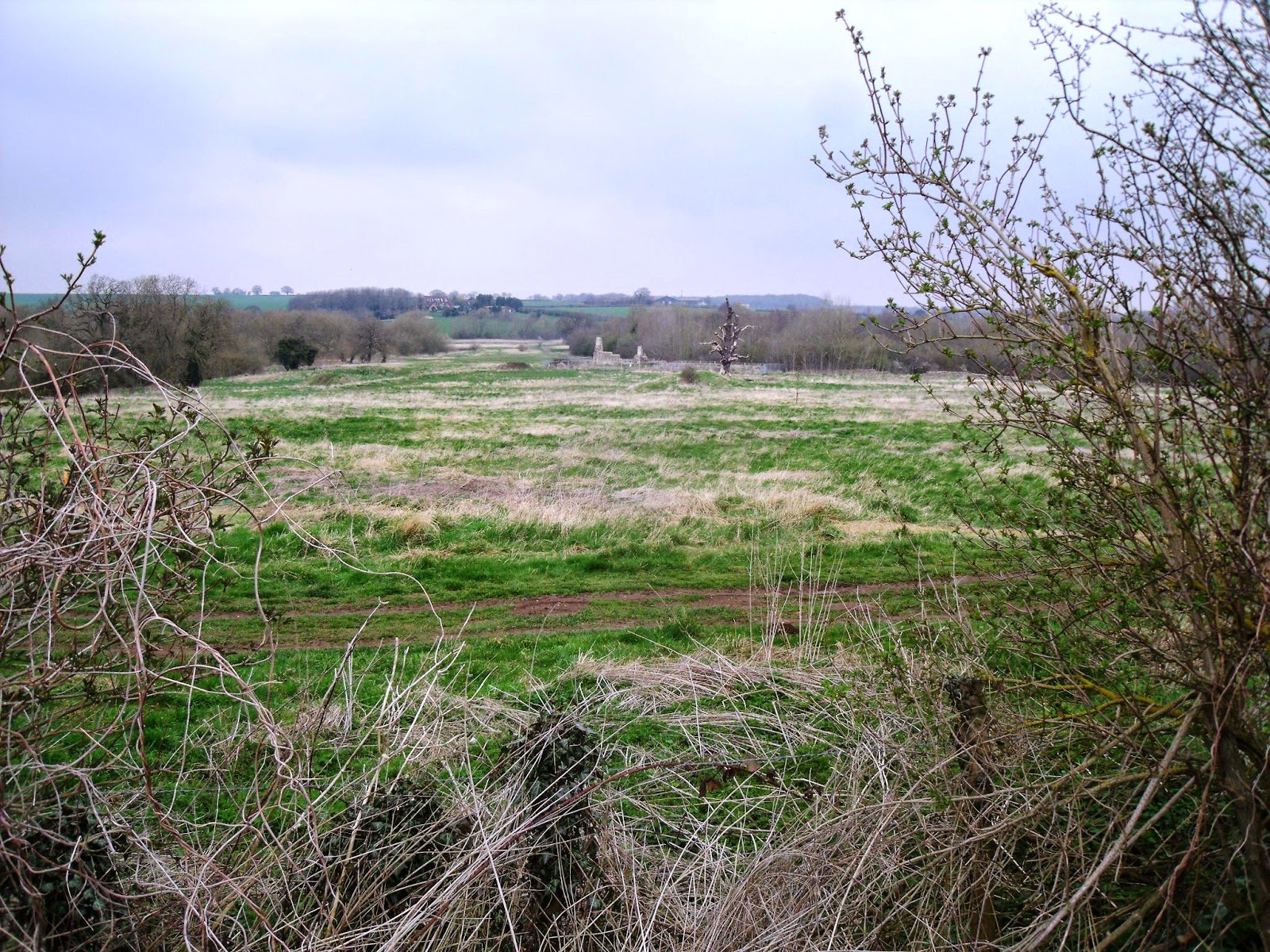 The view across the field from the towpath. In the distance the remains of  St. Peters church. Behind the treeline on the left flows the River Great Ouse. Walking past the church and around to the right brings you to Linford lakes and a very populated Heronry. 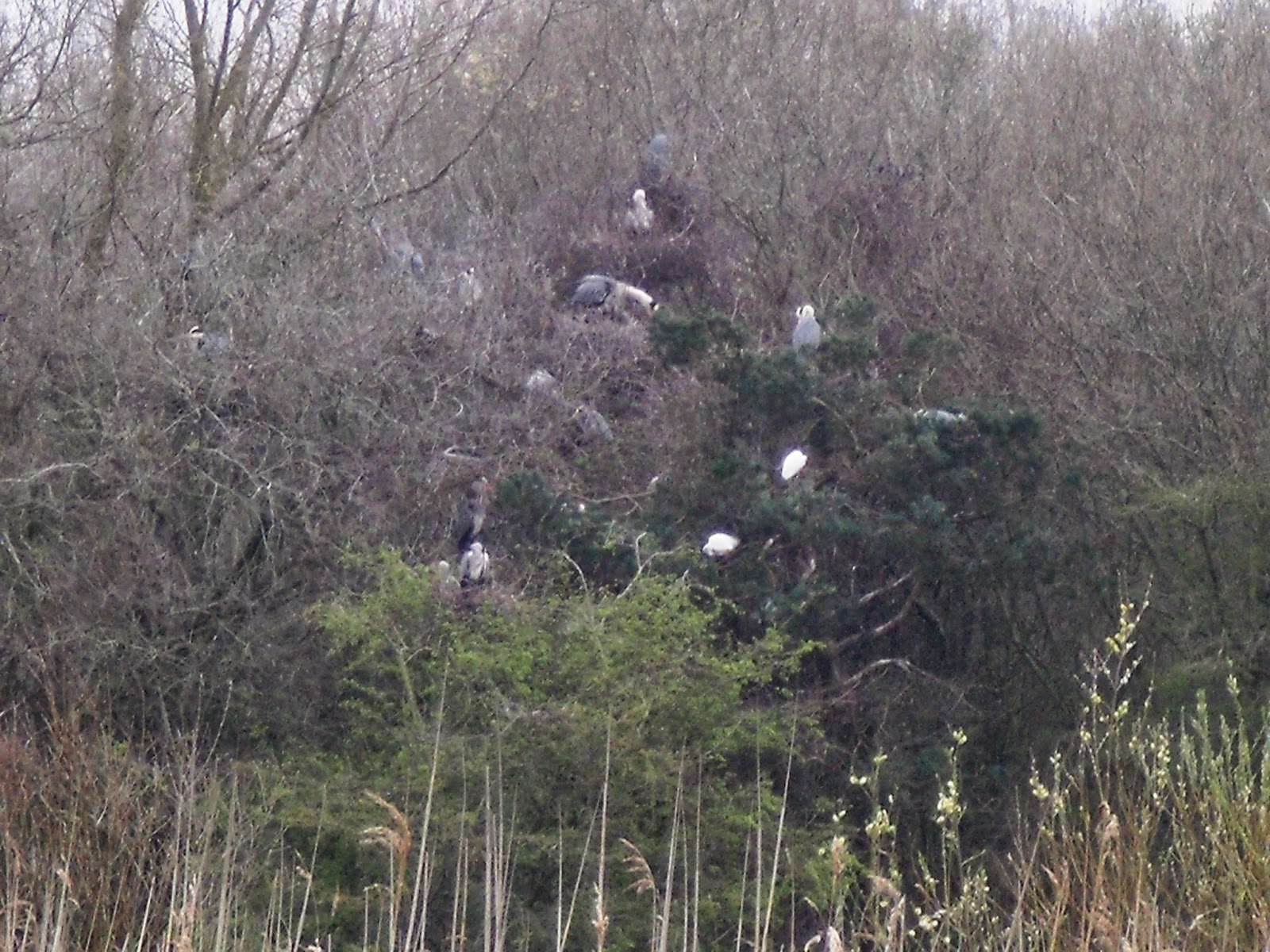 There are 10 herons and 2 White Egrets in this picture of the Heronry. Probably the same number again in other parts of the tree. Binoculars give an excellent view with glimpses of young in the nests. One of those times I wish I had a good zoom lens camera.

There are a lot of nice places in M.K. but a lot is missed by boaters just passing through. In the past I have been guilty of this and only recently with the health issues tying us to the area have the hidden parts been revealed.
There are many other moorings and other lakeside walks to discover but for now I`ll leave you with these few.

Now what could be unsettling about 240 outlet stores????

What a good life you two lead ...when the health gods are with you. Please stay afloat and on the move. Enough of the hospital %^&*( for a while.
Karen B

A great post, Les. David and I have always liked MK but have often been derided for it. It is a very well designed city and I am fairly sure you could walk a different route every day for months and not repeat yourself! I am keen to do more exploring of it when we are back this time (only 4 sleeps till we leave NZ).
Have you and Jaq been to Bletchley Park yet? Now that is a treat for two history buffs!
Mxox

We like the walk to Willen Lake. Wild life, boats, food and drinks!

Despite living less than 20 miles away I've never heard of the MK Rose. Must seek it out!
Take care Both.
Sue /Boatwif /nb Cleddau

Sally darling
You ladies can handle a thousand stores and not get unsettled.
Lesx

Hello Karen
Life sure is good just need to stay healthy. just like yourselves we battle on.
Best wishes to Jim.
Lesx

Hello Marilyn
Give MK a go. I have been to B. Park but Jaq still needs to go. Just been to much going on but we will get her there.
Lesx

Hi Chas Ann
Not done the Willen trip yet. Still always another time. Hoping to meet you as you come out of the Sth. Oxford.
les

Sue
Not sure how long it has been there so perhaps you can be excused not visiting yet. Interesting place.
Lesx