More of the old route through Apsley 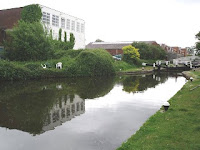 Quite a long time ago I did a blog on the original route of the canal through Apsley. This is what I referred to in the last post as `the long pound`. It started just off the map to the left at Boxmoor lock 64 and stretched over 1.5 miles to the far right of the map.
When I first came across the map all I ever found was the obvious site at lock 65 of the canals original route but since then looking at other things more has become clear. On the right the canal went off at 65 just by the white fronted building.


A  Lock 65 start of the original route.
B   Lock 66 the boaters service area and the Canal Trust yard. Ebberns road runs to the rear of here.
C   The point the canal crossed Belswains Lane at the junction of Olive Rise.
D   Belswains Lane near to the pub, Two Tuns I﻿ think it`s called.
E   Red Lion Lane. Notice how the junction E/F are in line on this old map. Check a modern map and they don`t line up. Reason is John Dickenson didn`t like Red Lion Lane running through Nash Mills so he moved it.
F   The private road leading into the school grounds.
I would like to look sometime for any trace of the bridges 154/155 and the 4 locks. problem is only the former is on public land and although  154 will be long gone there might just be signs each side of it. Two hundred years is a long time but sometimes you might just be lucky to find minuscule clues.
As for the locks it might be that the ground belongs to the school and permission to walk it might be possible. 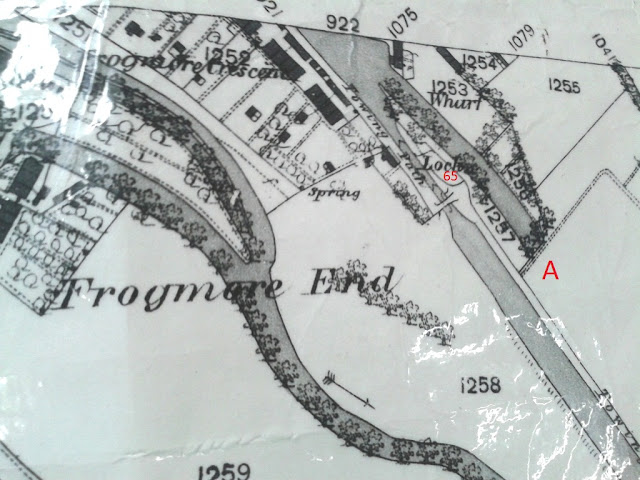 Lock 65 and A is where the canal followed the route of present day Ebberns Road. Lock 66 is just off the bottom right of the above map. 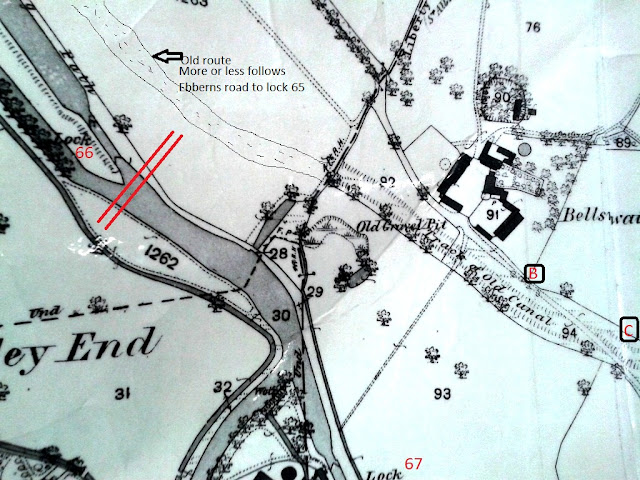 This map shows part of the old route. B is where the canal crossed Belswains lane and C is where the canal passes behind the pub.The two Red lines depict the footbridge to/from Sainsbury`s and runs across the old canal bed in Ebberns Road.
If you go walking around the area you must always bear in mind the route you are looking for is on a level with the top gate of lock 65. Fairly easy along Ebberns Road and across Belswains but gets interesting behind Belswains Lane. Although 200 years have passed and a lot of building has taken place it is possible to keep to a level search route until past the school where the site of the  4 locks are reached.
The whole story of how it all came about is facinating. Briefly Dickinson purchased nash and Apsley mills during a period the millers were in dispute over loss of river water to the canal company. After court cases and various other solutions that all failed Dickinson suggested the new canal route running past his mills. Instant transport solution for his business and the rest is history

Hi,
Interesting, when I was inspecting a house in Apsley (working as a Surveyor) about 12 years ago, I came across the traditional stone abutments for a lock or bridge in the back garden. These probably formed part of bridge 154 (in your map). Bearing in mind the slope of the garden they probably formed part of the western side of the canal.
Mike (Cowroast)

Hi Mike
Facinating find and might be just about all that`s left. If you still have the house number that would go a long way to putting a fix on the bridge.
I still would like to look for signs of the locks but another time. I do seem to find out a bit more ech time we pass through.

I have done another write up and linked back to you. Thanks very much. I've had a fascinating morning researching this area. http://alansbitsnpieces.blogspot.co.uk/2015/10/the-old-canal-through-nash-mills-hemel.html

I lived on Belswains Lane for a number of years, and have just recently moved a short distance to East Green in Nash Mills. An elderly neighbour on Belswains (who had lived there his whole life) told me the story of how the canal had been re-routed, which I found fascinating.

On moving to East Green I have become interested to find out exactly where the old canal passed through! I have found the information on this blog really interesting and useful in this search, as details on the old route are not easy to come by.

It would appear that the old canal actually passed right through my daughter's school!

I have also noticed on Google Earth that some features of the old canal are still visible! (At least, I believe so!). In particular bridge 155 and the section between locks 66 and 67. I may be wrong of course. At some point I hope to do a bit of hunting on the ground, if I can obtain permission from landowners!

I have created some very rough images to show this information if anyone is interested. It would also be fun to discuss this hunt in more detail if anyone is still on the case!...

Thanks for all the info...
Chris

My husband Les wrote this post. He loved the canals and living on a boat as a continuous cruiser. He died four months ago. Les would have been chuffed to bits with your comment, knowing that you found his historical research valuable and took the time to let him know.

Good luck with your the rest of your search,

I am so sad to hear this and I am sorry for your loss. I suspect I would have found Les a really interesting person to meet.

I will try to keep the hunt going as a tribute :)

I have lived on belswains for nearly all my life and only a few months ago found out that there even was an old canal route and found it fascinating to see all the old OS maps, and then today i came accross this site and its fantastic!! I dont know if you'll see this as i can see its a been a few years since it was written but bravo none the less i found it such an interesting read!! RIP to Chris

I'm still living in the area and one day hope to do some more research on this! Keep think about sections of the old canal still sitting underground waiting to be rediscovered! Chris