We spent a nice few days in Rickmansworth with friends and family once again visiting. The fuel boat came along so a chance to top up the diesel tank before going into London. We had only just 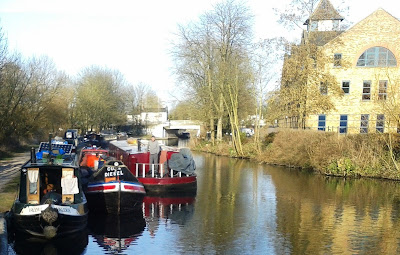 finished when a passing wide beam boat stopped for fuel. Look Bonny 3 boats and still plenty of room for boats to pass. 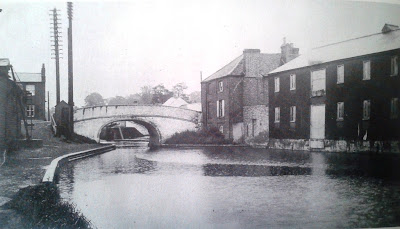 The same view and the bridge has been modernised. A new office block has replaced the old warehouses. You can see the white doors that cargoes would be loaded in/out of boats. 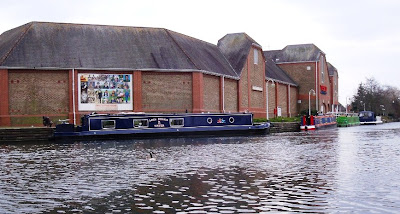 Now if you can`t get a Tesco delivery to the boat then take the boat to Tesco. In the picture ` Like ducks to water ` home to Jacquie and Stein doing exactly what we did when we arrived. 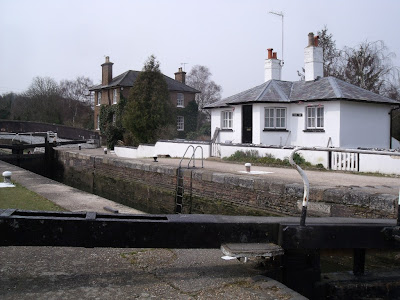 Stockers lock is an interesting area. The whole area including the farm to the left of the canal is a conservation area with many listed buildings. Look for the anti tank devices and the WW2 pill box. The link is interesting, scroll down the pages. 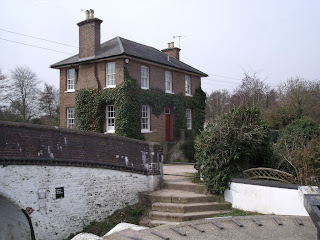 The building next to the lock house is Stockers House built in 1861 for the collector of taxes on coal and wine entering the Metropolitan police district. So this marker is on the border of Hertfordshire and the London borough of Middlesex.
The original boundry was 20 miles out of London and the tax point was Grove Park which is the reason Lady Capels Wharf became a popular place to un-load coal for shipment by horse and cart.

At present we are in London doing the tourist thing for Jaq. The basin next to Paddington station is so convenient for traveling around the city.
Today being the Thatcher funeral London will be a nightmare so we are keeping north of the city.


collector of Coal and Wine Duties on the Grand Union Canal. The bridge is a Grade II Listed

structure, as are the lock and coal duty marker.


approximately half a century after the Grand Union Canal


was constructed, is pictured right with Stocker’s House in the


background, where the Collector of Coal Duties resided.


Cast by H. Grissell of Regents Canal Ironworks, it is a castiron


bearing the City of London Crest. This made it clear that


anyone crossing from Hertfordshire into Middlesex carrying


coal or bottles of wine had to pay a levy to the Lord Mayor,


Aldermen and Common Councillors of the City of London in


accordance with the provisions of the London Coal and Wine 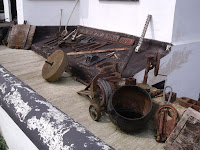 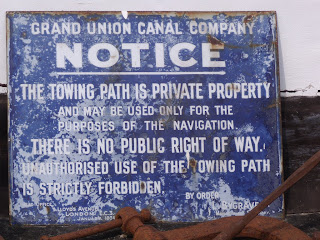