﻿
The pictures below are of lock 67 in Cassiobury Park first is circa 1921 and then present day alas no cottage. ﻿ 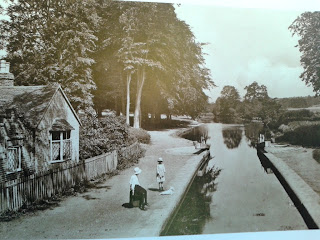 The canal came through Grove and then Cassiobury parks in 1797 after compensation was paid to the Earls of Essex and Clarendon.
Conditions were made in the agreement mainly that the canal would twist and turn, be wider than a standard canal and as much as possible imitate a river. Also the ornamental bridge at the Grove was built for access to the Grove.
Through the war years the grove was the headquarters of the London Midland Railways who had moved out of London to avoid the bombing and keep the railways running during the war years. It was put to many uses post war 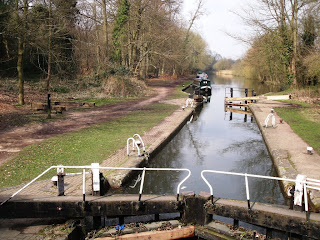 but ended up back in railway control and was used as a training centre and hostel. I remember back in 1969/70 I was working as a bus driver for London Transport and many staff both on bus and train services lodged there. One duty was the night staff bus  which would enter the Grove late at night and first thing in the morning to get staff to train and bus depots locally. So the `what if` title.  What if the canal had never come through the park the scenes pictured would never have been possible. 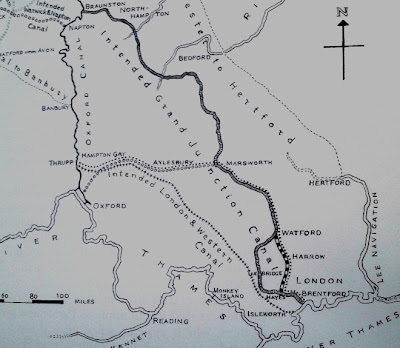 On the right you can see that the  route south from Watford had been intended to pass through Harrow and avoid Uxbridge. Yes the scenes above would still be possible but the `what if` I mean is the route the canal was to take following the present route having reached Rickmansworth via Uxbridge from Brentford. The problems with purchasing land from the Earls at Watford made the canal builders seek a route north of Rickmansworth over to the west via a flight of 16 locks to Langlebury which is west of Hunton Bridge. Here the canal would go through a 900yds tunnel and then a level 4.5 mile pound to join the original route at Kings Langley. See blog 1/4/2013 for the map of the route through Apsley and Hemel.
An arm would have been built into Watford more or less passing through Cassio bridge from the west and ending in a basin just near Bushey station or if you know the area BQ. The idea was to further extend the arm to St. Albans.
The present route was thought to be close enough to Watford and financial backing for the St. Albans route was not forthcoming so the plan never materialised.
What I`d give to see the original plans for all this. My thoughts are that Hertfordshire archives are held at Hertford on the River Lee so I might just get a chance as we journey on from London. 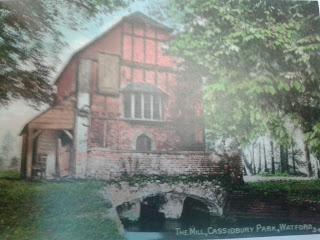 Just as a point of interest if you pass through the park. Just to the right of lock 67 pictured above, the River Gade leaves the canal and it then passed through Cassiobury Mill. The Mill was demolished in 1956 but you can still see the arches at the bottom where the river still passes through. Don`t be misled by the water cascading over a modern day concrete  sill just adjacent to the lock. Go round a little and with care the base of the mill can be seen.
Posted by Les Biggs at Tuesday, April 09, 2013

Oooo are you going on the Lee navigation?

Hi Carol
You are correct.
Be nice to see you and we will leave the where up to you. Hope to be in the basin(Padd)sometime Saturday not sure when prob late afternoon.
Hope you still have my number if not use the comment section and I will sort things.
Les

Les and Jaq
I do have your number, maybe on the way closer to Stratford we can meet up? You should divert a little (just a little) and look at three mills. Its so pretty and there is a nice big Tesco there. I will send you a text so you can let me know your progress. Look forward to catching up with you both.