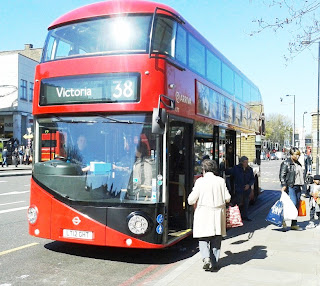 Just out for a stroll in London and this rather nice shiny bus caught my eye. It looked pretty much the same as all the other Red buses but looking along the side it looked different. As you can see it has the normal front entrance and centre exit doors but at the rear it had gone back to the days (40+ years ago) when I drove buses for London Transport, it had an open rear platform. I was under the impression that this set up was used when buses had a conductor to supervise the loading of passengers and collect fares. It was the saving of the conductors salary that brought about the OMO bus or One Man Operated. Personally I think this rear door is a big mistake the man (you can just see his arm holding the rail) has to be paid to stand there doing nothing. He has no fares to collect as the Oyster card system has replaced, almost, all cash ticket purchases. 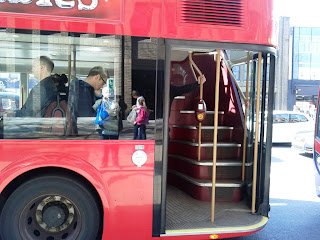 Of course in my bus driving days buses were run by London Transport that covered not just central areas in and around London but also out into the countryside under the umbrella of London Country buses. Now I would not like to hazard a guess as to how many different companies run the bus routes in and around the capital. Of course London`s Red buses come under the control of Transport for London and Boris the Mayor of London.                                It was nice to see a lot of hybrid buses in use which is a step forward but Boris your open back deck scheme is not worth the expense. Once the driver shuts the doors on the OMO system this stops a number of dangerous situations arising. I have seen people dragged along after trying to jump aboard an open back bus. Also I once witnessed someone tripping down the stairs and rolling off the rear platform into the road, luckily no car was following the bus. 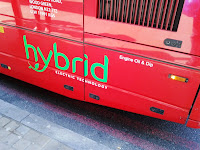 I remember my training to be a bus driver took place at Chiswick bus works. Part of the training was a session on the skid patch within the works on it`s own internal road system. The window behind the driver was removed and the instructor would reach through and pull the steering wheel round and at the same time apply the handbrake. All that remained was the poor driver had to regain control (no power steering) and get the bus to end up in a pre determined position. If you watch the link below you will see lots of people watching in front of the training building. I remember a time when one trainee got it wrong and almost hit the building, needless to say the area cleared in seconds.
Seeing the Red buses brought back memories of 3 years bus driving when I was 21.

The company are in the process of constructing a large number of low-floor double deck buses for The Greater Toronto Area (GTA) Metrolinx also know as GO Transit. Double decked buses around here have to be very careful account overpasses have limited height. Saw one the other day and blinked...
everything here has been single deck for years.

Sort of like seeing a higher than normal narrow boat to accomodate tall residents (me?).

Sunny, cool here in Burlington Ontario, at the west end of Lake Ontario this Saturday morning.

http://crave.cnet.co.uk/cartech/new-bus-for-london-your-new-routemaster-questions-answered-50006550/
This link has a time lapse build video