It is time again for The Last Great Race to begin! Every  year I follow the Iditarod Sled Dog Race to Nome, Alaska; a trip by dog sled over vast, difficult terrain including desolate tundra, dense forest, snow scoured mountains, and the frozen edge of the Bering sea, some 1490 miles (1688 km). It is grueling, dangerous for the humans far more than their canine companions, and will test everyone's endurance. Dogs and their mushers must work together as a solid team in order to survive. The dogs are the stars in the Iditarod and they are why I follow it. Those who know me well, are aware that I have no passing fondness for canines. But I have great respect for working dogs--who actually work for their keep, and even more for Alaskan sled dogs--who do their work in some of the worst terrain and weather in the world.

James Kari, Assistant Professor, University of Alaska Native Language Center in 1979 stated: “The name Iditarod came from an Ingalik and Holikachuk word hidedhod for the Iditarod River. This name means distant or distant place. This word is still known by elders in the villages of Shageluk, Anvik, Grayling and Holy Cross.”
This race commemorates sled dog freight and mail carrying in the Last Frontier as well as the famous 1925 serum run when sled dogs and the mushers braved the harsh climate and risked life and limb to deliver medicine to the diphtheria stricken community of Nome and other surrounding communities. All other means of transportation had failed and sled dogs were the only means available to save the citizens of this small native village on the edge of Norton Sound on the Bering Strait. Twenty mushers and one hundred and fifty sled dogs relayed diphtheria antitoxin across the interior of the Territory of Alaska. It took them five and half days.
There are two different routes: the northern route is run in even numbered years and the southern route is run in odd numbered years. 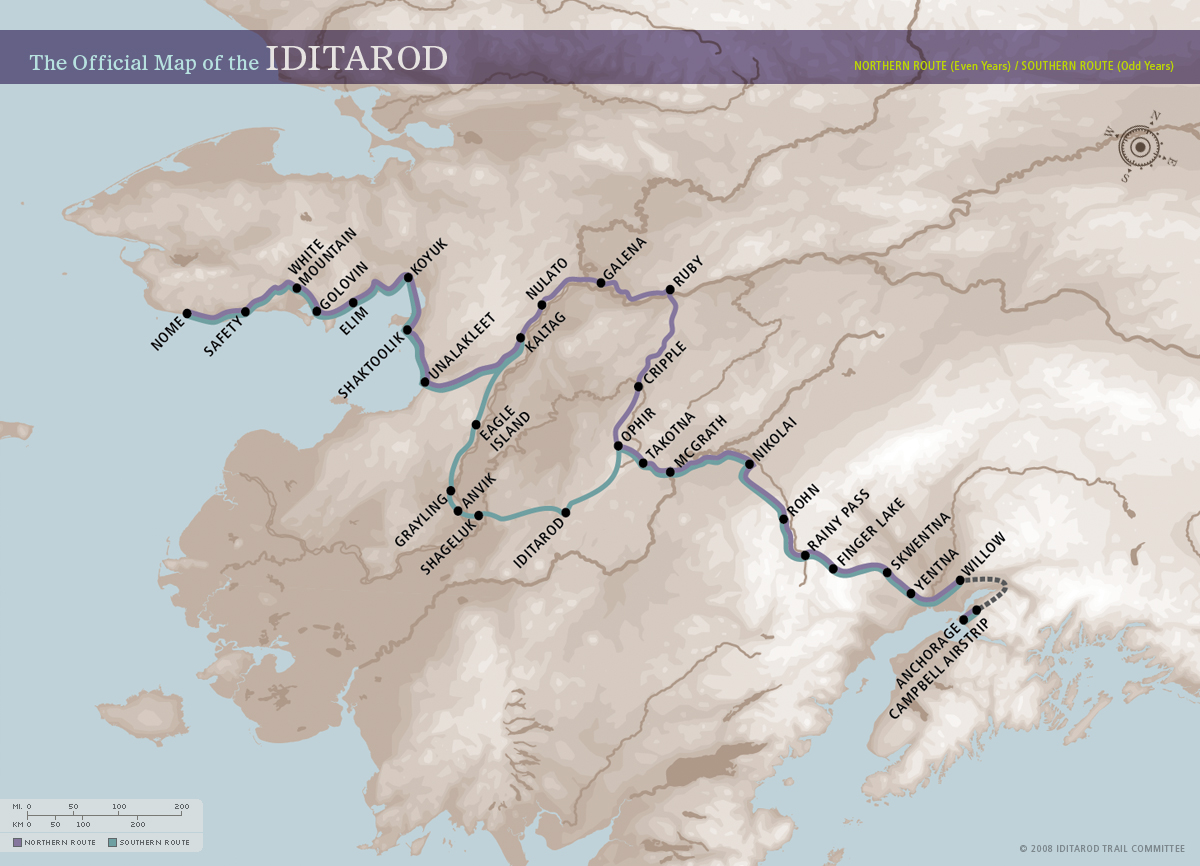 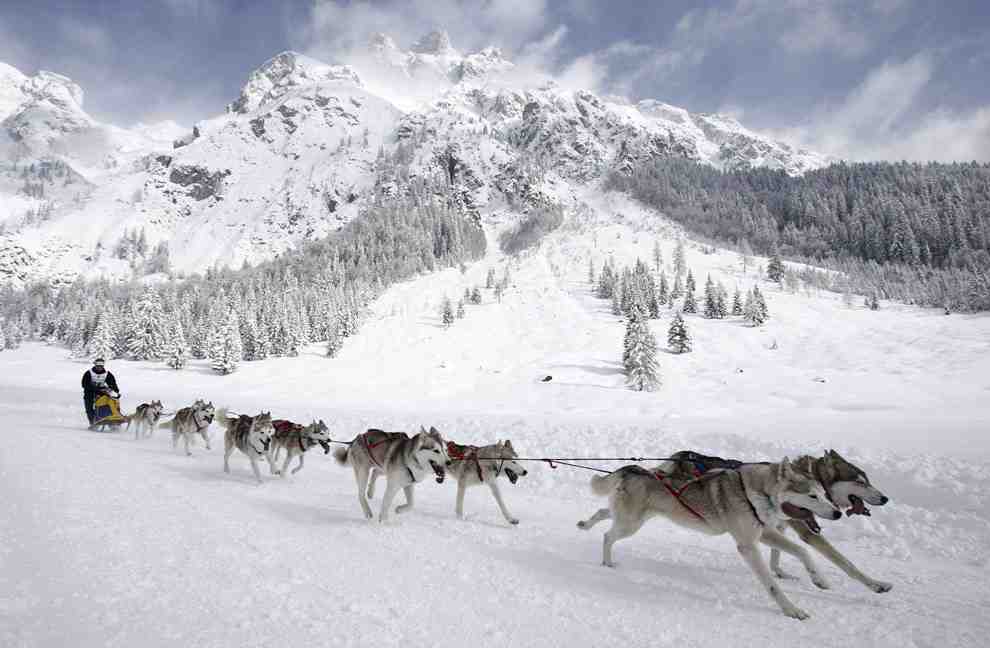 The average cost to run this race is $50,000.00 to run an appropriate dog kennel and breed a team; $10,000.00 for the race entry fee, dog food for the race, dog supplies, musher supplies, and freight. The winner arrives first through the burled arch in Nome with the shortest time and receives $68.000.00 in cash (U.S. Federal taxes apply), a brand new Dodge RAM 4x4v pickup. $600,000.00 is distributed to the top 30 finishers each year, and every musher who finishes the is awarded $1049.00 along with brass belt buckles and special Iditarod patches. The Rookie of the Year Award is given to the musher who places best amongst those racing for the first time.
The first musher to reach the halfway point in the town of Iditarod in odd-numbered years and the town of Cripple in even-numbered years receives the GCI Dorothy Page Halfway Award and $3,000 in gold nuggets. The first musher to reach the cities of Anvik in odd-numbered years and Ruby in even-numbered years gets a seven-course meal prepared by Alaska's top chef at the checkpoint and $3,500 in one-dollar bills as winner of the Millennium Hotel First Musher to the Yukon Award. The first musher to make it to Unalakleet receives a hand-carved trophy and $2,500 in gold nuggets awarded by Wells Fargo. The musher who crosses the finish line last receives the Wells Fargo Red Lantern Award.
The golden embroidered harness of the Lolly Medley Memorial Golden Harness award is usually given to the lead dog of the winning team and voted on by the other mushers. Consequently in the 2008 race the golden harness was voted to Babe, lead dog of the third place team. Babe was eleven years old and it was her ninth Iditarod.
With modern technology, videos are available throughout the race as well as live web cam feeds and one can log in to the official race web page and choose favorite mushers. E-mails will be sent out to you whenever a musher you select checks in and out along the race. There is also an educational tab for teachers who wish to include the Iditarod in their classroom to teach about geography, culture and history.


The Story of the Widow’s Lamp
During the days of Alaska sled dog freighting and mail carrying, dog drivers relied on a series of roadhouses between their village destinations. Since these mushers ventured out in most all kinds of weather, for safety reasons they found the idea that pilots rely on, known today as the flight plan. Word was relayed ahead that a musher and team were on the trail, and a kerosene lamp was lit and hung outside the roadhouse. It not only helped the dog driver find his destination at night, but more importantly, it signified that a team or teams were somewhere out on the trail. The lamp was not extinguished until the musher safely reached his destination.
In keeping with that tradition, the Iditarod Trail Committee will light a “Widow’s Lamp” at 10:00 a.m., on the first Sunday in March, in Nome at the trail’s end. This lamp, which will be attached to the Burled Arch, our official finish line, will remain lit as long as there are mushers on the trail competing in the race. When the last musher crosses the finish line, officials will extinguish the “Widow’s Lamp” signifying the official end of the Iditarod for that year.

All too often, public and media think of the race as being over when the winner crosses the finish line, yet there are still teams on the trail. Let it be remembered, Iditarod is not over until the last musher has reached Nome and is off the trail.
In 2008 and again in 2009 Twenty year old Rachael Scdoris of Bend, Oregon, USA, met the prequalification and finished the race 57th and 45th respectively. She is legally blind and was allowed a visual interpreter on his own sled to travel by her side and warn of dangers she could not see. Born with this congenital disease her vision is 20/200 and she is color blind. She is only too aware of the importance of the widow's lamp--even if she could not see it clearly.
Posted by Mrs. Jaqueline Biggs at Saturday, March 02, 2013

That was great! I got lost for 40 minutes looking at various race videos. Love those dogs! And crazy mushers. Thanks for an "inside" look at some of the details.
No snow here in Pullman. No flowers either.
Karen

Jaq: A superb description of
an event of which many are not aware. Suspect we who live and have lived in northern climes
are more aware of such similar events in the north.
Have also followed the races
as well; it is something to simply see the dogs pulling a sled; something that was also common in the Canadian Artic until the advent of motorized
snow mobiles.
Having been in the far north, on winter assignment with one of my employers some thirty five years ago can well attest to the harsh climate and the wonderful way such animals are utilized and treated. Was at the mouth
of the Mackenzie River on the Bering Sea doing photography. it was a very short four days there, flying from Yellowknife, and then Edmonton and Toronto. I want to return
in the winter, not the summer which can very different.

Hi Karen! Lovely to hear from you. I'm glad you enjoyed this post. I can see you flitting around from web link to web link, enjoying all the action!
Big hugs!
Love Jaq

Hi Bryce! I knew if anyone appreciated the Iditarod it would be you! I think the areas you mention would actually be much more beautiful and entrancing in winter--without 300 million mosquitoes keeping you company!
JaqX