Just before arriving at the Pontcysyllte Aqueduct the canal has to make a right hand turn at Froncysyllte but before the turn fantastic views through the gaps in the trees enabled me to take the pictures below. The first one is the railway viaduct and the second the Ponty Aqueduct standing where it has stood for the last 200 years. 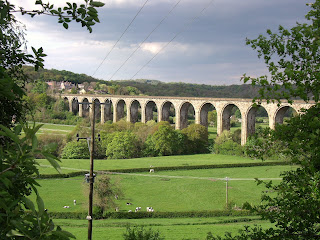 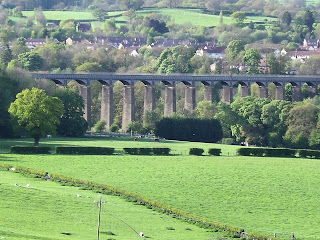 Wonderful views as the boat drifts slowly across with a narrow towpath to one side and just air on the other. Look at the edge of the iron trough it just doesn`t seem strong enough but time 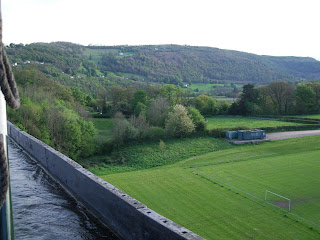 has proved otherwise. I always enjoy coming across here and today was no exception with the late afternoon sun i just sat and enjoyed stunning views all around.
After crossing the Aqueduct a sharp left turn takes you on a 3 mile journey into Llangollen but this time i wanted to carry straight on through the Anglo Welsh hire base where the boats are moored 3 abreast plus singly along the towpath side. The reason i was inching my way through the one boat width channel was to moor in the old Ruabon Arm a 100yds past the hire boats. 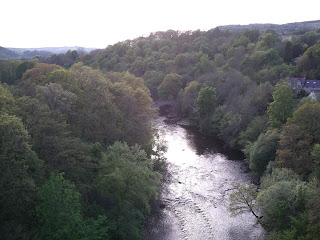 All was going well as i drifted through out of gear but as i engaged or tried to engage forward gear nothing happened. I quickly stepped off with a rope and pulled into the one and only gap.
My thoughts were the control cable had snapped and was not to worried as i had a spare and would soon be mobile again. But my luck was not that good today and after calling an engineer he
removed the gearbox etc and found the drive plate had broken up. 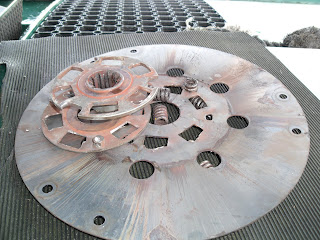 The old one above was 2 metal centre plates riveted to the large disc with lots of springs to absorb the movement of the central splined shaft.
The supplier of the plates no longer supplied the original part as he was fed up with the number that failed prematurely. 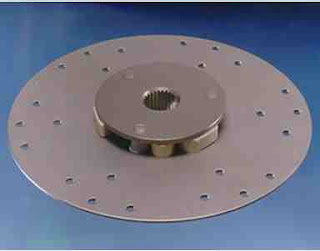 The new one is made by R & D and has one thick central disc and heavy duty material to absorb the movement, no springs less parts and in my opinion a better quality product.
So stranded for 3 nights but at least there was a local shop and the Telford pub opposite.
Also gave me plenty of time to go down below the Aqueduct to the R. Dee and get a different view of the canal in the sky what i stopped here for anyway.