Entering Ellesmere two large expances of water are right alongside the canal and make very nice moorings. These water lakes are in fact Meres a result of the ice age and were created when the ice melted. 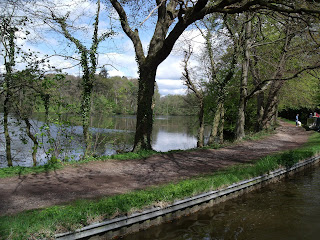 Below is the Ellesmere arm a very convienent mooring for the 18c Market town. A lot has been demolished here and on the right Mr Tesco has managed to aquire land for a new store. On the 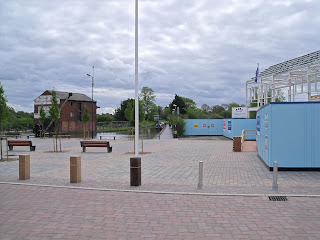 left i`m glad to see the old canal warehouse is still standing not i would imagine with the developers consent but more likely a preservation order. According to the plans i saw a pub/restaraunt will be built alongside the warehouse and an old peoples home next to the pub.
Think i`ll put my name down as i won`t want to walk far for a pint in my old age.
Also being built will be a new Medical centre and housing so this little arm where you can sit on your boat and watch a game of cricket taking place on the pitch next to the canal will end up like mooring in the middle of a housing estate.

Just on the edge of town is The Mere largest of perhaps 5 or 6 around Ellesmere, the 1st photo looking east and the 2nd West giving some idea of it`s size. 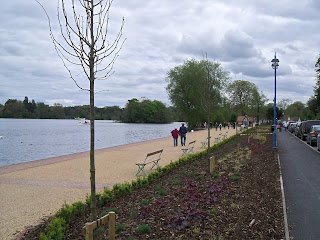 A nice visitor centre and a snack bar have been provided along a very pleasent promenade and trips around the Mere can be made aboard the 3 yrs old diesel fired steamer Kathleen. 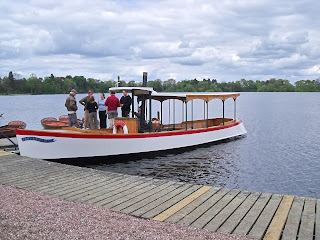