Something that had been on my `to do` list for a long time was to become a Blood Donor and reading the blog of John/Fiona aboard NB EPIPHANY (April 28th) i noted that John had given blood and this reminded me to get this off my `to do` list.
The National Blood Service website gives all the details plus a video tour and also has a search facility for the mobile donor clinics all over the country. 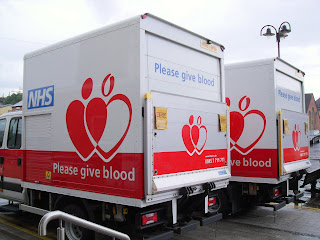 This was the reason i stayed a little bit longer Nantwich than i should have on the 48hr mooring but as it happened no one queried it and i`m sure if BW had come along checking they would have given me the extra time for a worthwhile purpose. A pint was drained from my arm in 9 minutes not by Vampires as i suggested in a past blog but by a very nice nurse who kept a watchful eye on the virgin donor.

Tea and biscuits were available while donors rested before going about their lives.

I have received a text thanking me for the donation and saying i would learn soon of my blood group. So for the next 16 weeks before my next donation my body can make up the pint.
Please give it a go and if like me you are petrified of needles don`t worry it`s nothing like the dentists needle and you hardly feel anything....honest...trust me....i`m a boater.

These brave souls below had hired a boat for the day but hadn`t paid extra for a guaranteed sunny day so it was up with the brolly`s and cruise on.

The picture below was taken in Nantwich basin when i cruised in to fill with diesel. I had entered from left of picture and needed to turn and reverse onto the diesel bay but as you can see it was 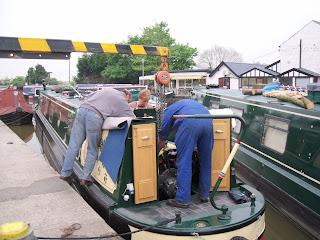 occupied. In the end i decided to turn sand reverse along side the boat and hearing my name called it was only then i noticed it was John & Cathy on NB Marmaduke.
It turned out that Barrus had decided to transplant a brand new engine for the original 1 yr old one that had been giving minor problems for a while......and all free, now that`s what you call good service.
So over bacon sarnies and cups of tea an hour was spent playing catch up.......thanks for the hospitality guys and hope to meet you again soon.
Posted by Les Biggs at Wednesday, May 27, 2009

Good on you for the blood donor session!
'A pint? Good grief, that's nearly an armful!' Tony Hancock, if you recall?
S

470ml to be exact as near to a pint as matters.