Chirk is where the Rivers Dee and Ceirog converge, it is also on the border of England and Wales and just a short distance on from where i took the picture below the Llangollen canal crosses the 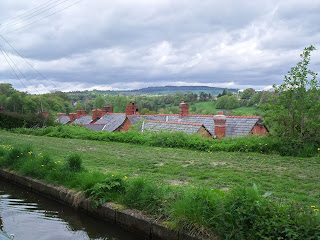 border on the Chirk Aqueduct. Alongside the Aqueduct carrying the canal is a viaduct pictured below carrying the rail line built in 1846 some 30` higher than the Aqueduct`s 70`. Each have ten arches.
Chirk Aqueduct has no iron trough like the Pontcysylite but just a bed of ironplates and sides of stone. It was built in 1796/1801 by Telford & Jessop and although it lacks the height and length of the Ponty.... i still enjoy the trip across both just the same. The canal after the Aqueduct with just a winding hole(turning point) between plunges into Chirk tunnel 459yds long wide enough only for 1 boat. Hardly a plunge at 459yds, on the southern Gd. Union lies Braunston Tunnel
at 2042yds and Blisworth at 3057yds both wide enough for 2 boats to pass carefully. Still for the holiday boater, and i haven`t forgotten i was one in a past life, it must be quite a scary moment entering the darkness. 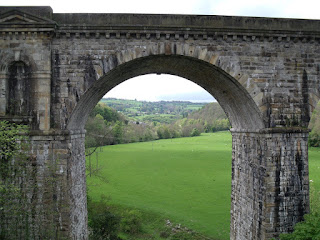 Above one of the Rail Viaduct arches and below zoom in for the view. 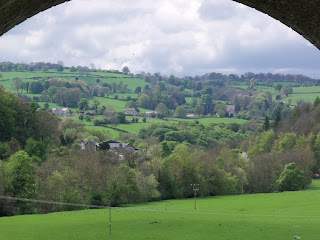 Below the Chirk tunnel entrance and i am still on the Aqueduct with the boat just about to enter the winding hole. I had to wait while a convoy of 6 boats came through the tunnel. 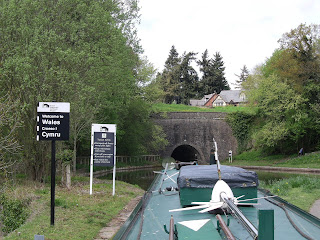 After exiting the tunnel i decided to moor and walk the 2 miles to Chirk Castle not to "case the joint" as i felt i was being accused of "No photography inside for security reasons" said the guard when i took a picture inside the Castle, to late mate it`s lower down for all to see so start making plans everyone.

These gates below were made in the early 1700`s and have stood in several positions around the Castle grounds before being erected here in 1888. If you can zoom in on the pic you will see the amount of work that went into their making. 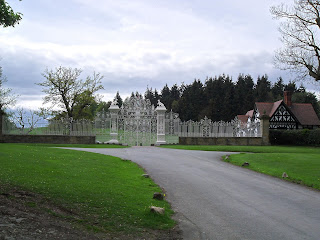 Chirk Castle built in 1310 by Edward 1 sits high above the Welsh Border and it`s said has views over 9 counties. 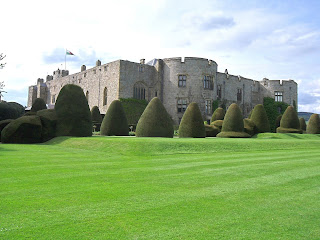 Ssssh! Don`t tell anyone i took this pic of a room inside the Castle and for security reasons you had best not look at it. 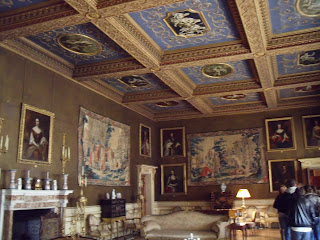 The gardens are very well cared for with the Topiary 130yrs old mostly Yew (Taxus baccata).
Two tons of Yew clippings are collected yearly and used to make Cancer treatments. Now like probably a great many of you this big C thing caught my attention and looking on the net it seems that the bark and leaves of Yew contains Paclitaxel, now i`ll leave you to do the Google search as i don`t want to do a link to `C` . Try English Yew as cancer treatment. 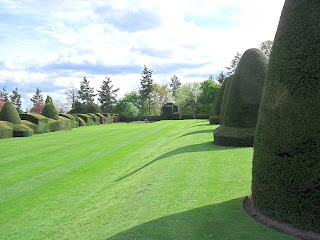 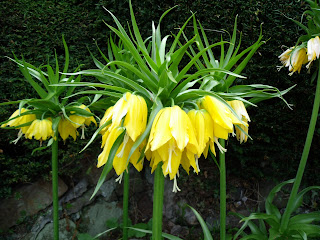 Right something a bit more pleasant i photographed these from amongst the many flowers in the Castle garden as i liked the look of them but can anyone tell me what they are called.

He He Les
I took my grandson there and I too took loads of photos!! One was taken in the dungeon and I swear there is a ghost in the photo!!
I am sure the photo ban is attributed to 1. The flash damages the materials 2. You can buy photos in the shop!! The latter being the most significant! Some pic are on a really ancient blog of mine I think. Don't forget to stock up on your welsh cakes

Hi Carol
Ghosties eh! I must have a look at the picture I took of the dungeon.
I was a bit dissapointed that more of the castle wasn`t open to view like the kitchens and servants quarters.Shugborough Hall is my idea visit as you get to see all aspects of life when these properties were lived in.

I think your flowers are yellow Fritillaria to check I did a search
http://www.tulipworld.com/itemdesc.asp?item=Yellow-Fritillaria-Lutea&cat=Fritillaria&ic=4592
Enjoying your blog. Thanks for sharing your trips.
Jane

Hi Jane
Thanks for the info. Although there were many flowers in the castle gardens these just caught my eye.