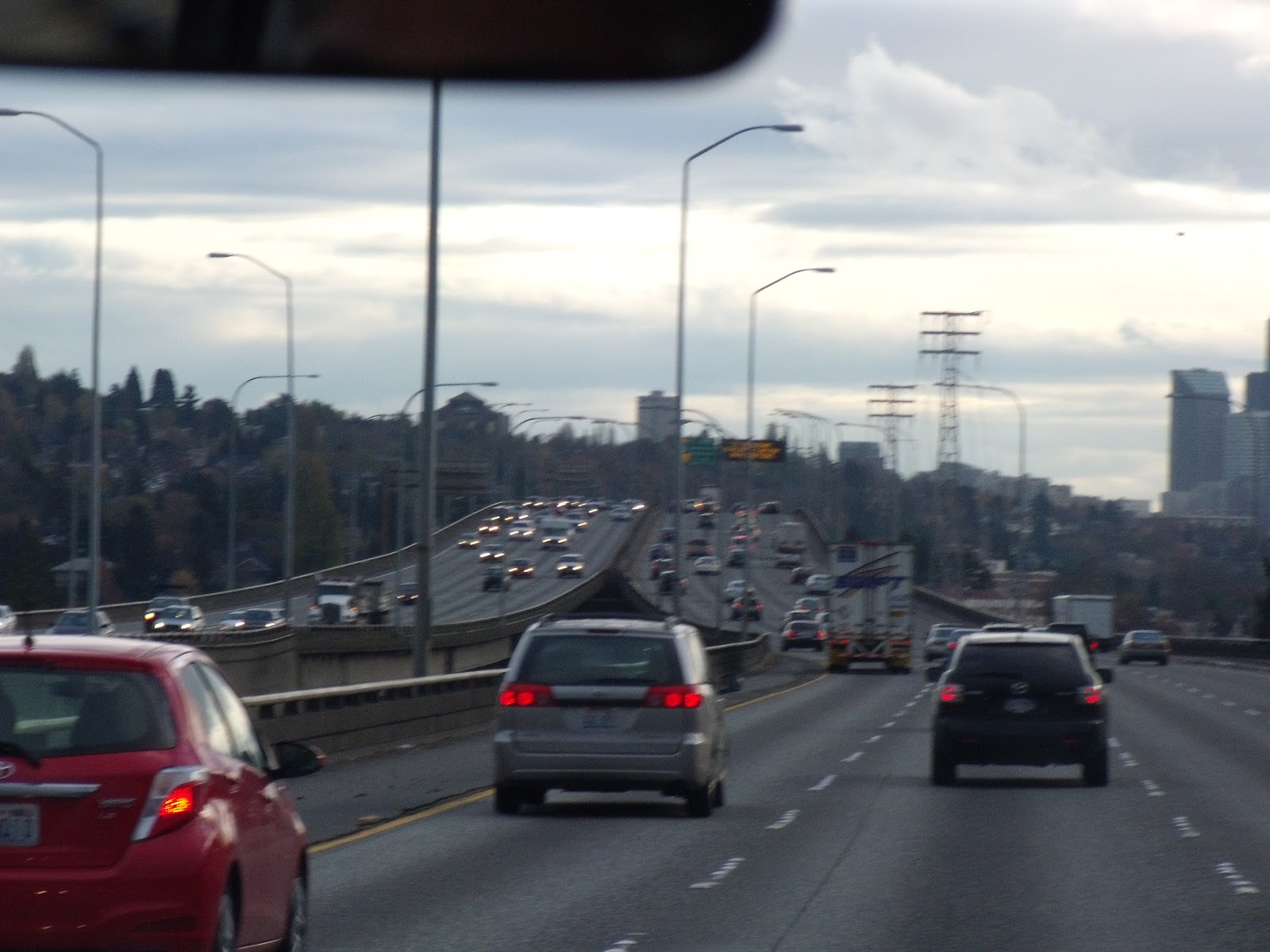 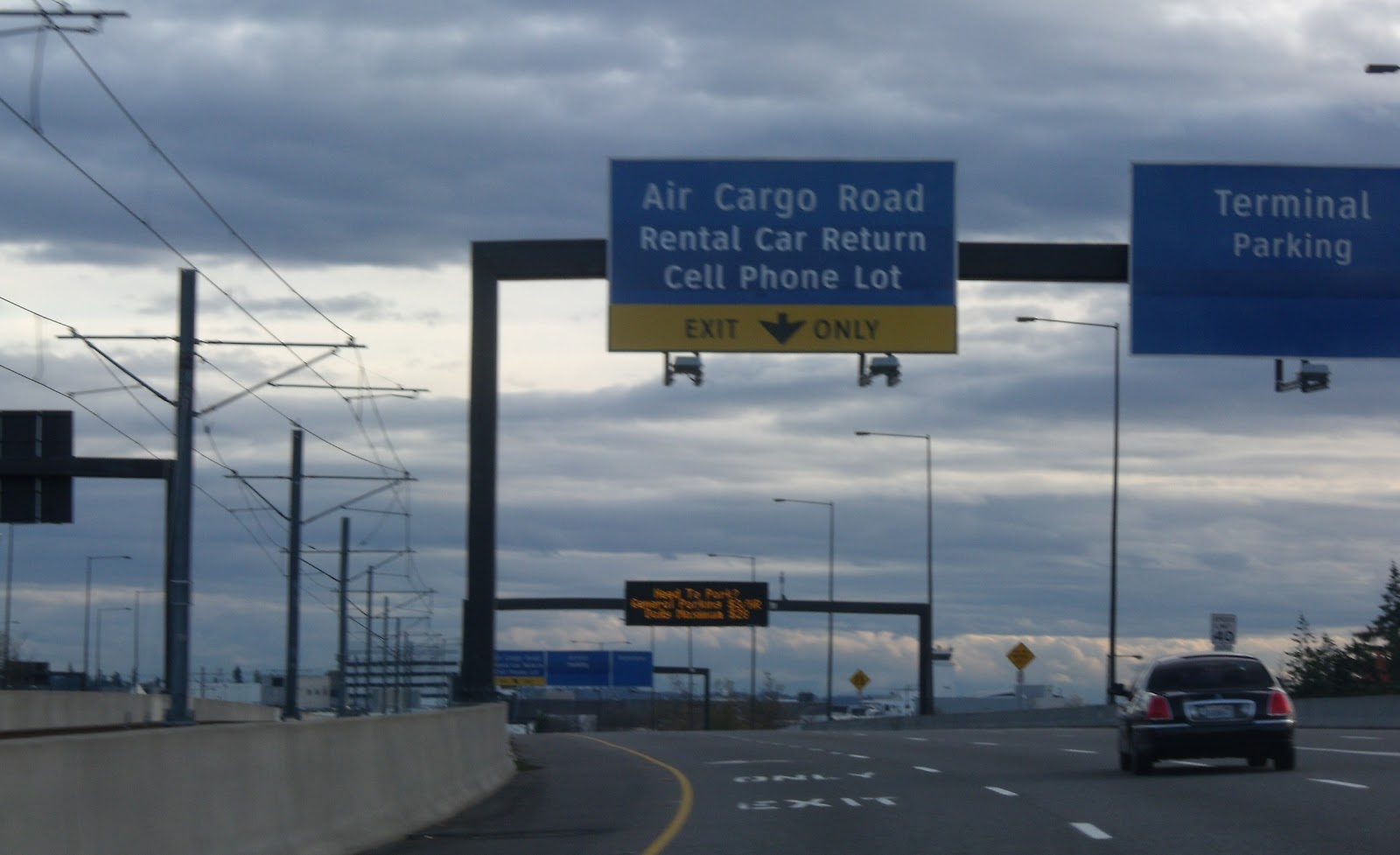 Above we are on Interstate 5 that stretches 1375 miles down the west coast from the Canadian border to the Mexican border. In this short trip to Seattle airport there were in places 5 to 7 lanes each way with 3 lanes between that are tagged on to either the north or south flow in the rush hour. In the centre of the picture the lanes are coming together and are over several more lanes below. On the left the sign reads `cell phone lot`.  This is a car park where cars can wait for a call from arriving passengers to say they are ready to be picked up. 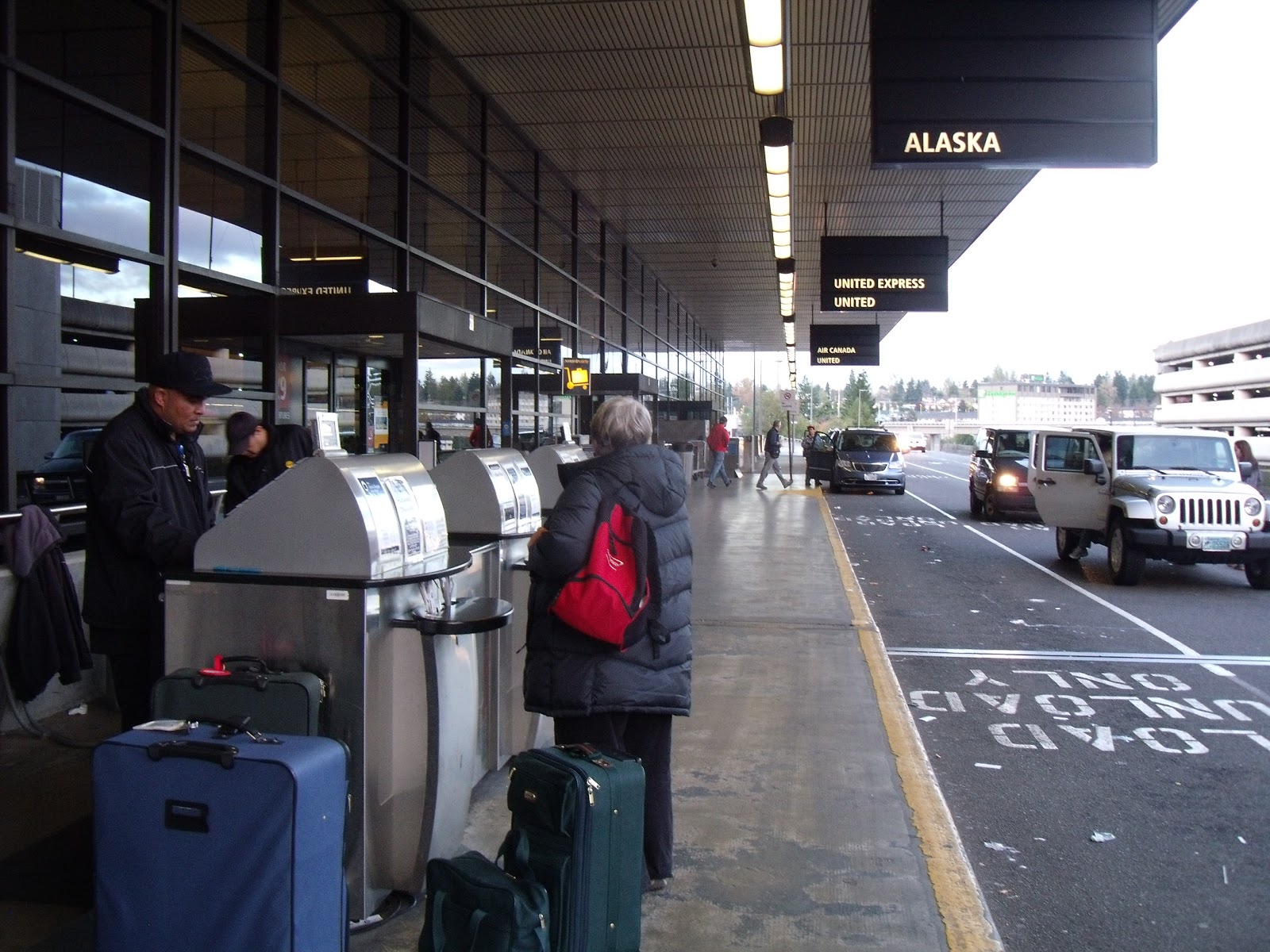 We have been dropped off and at the kerbside are check in stands. These guys are called Sky Caps and they can accept your bags and issue a boarding card. This can be very useful when the airline desks in the terminal are handling large queues and a few dollars tip is all they require. All along the drop off lane the airlines are listed so you end up in front of your airline desk as you enter the terminal. 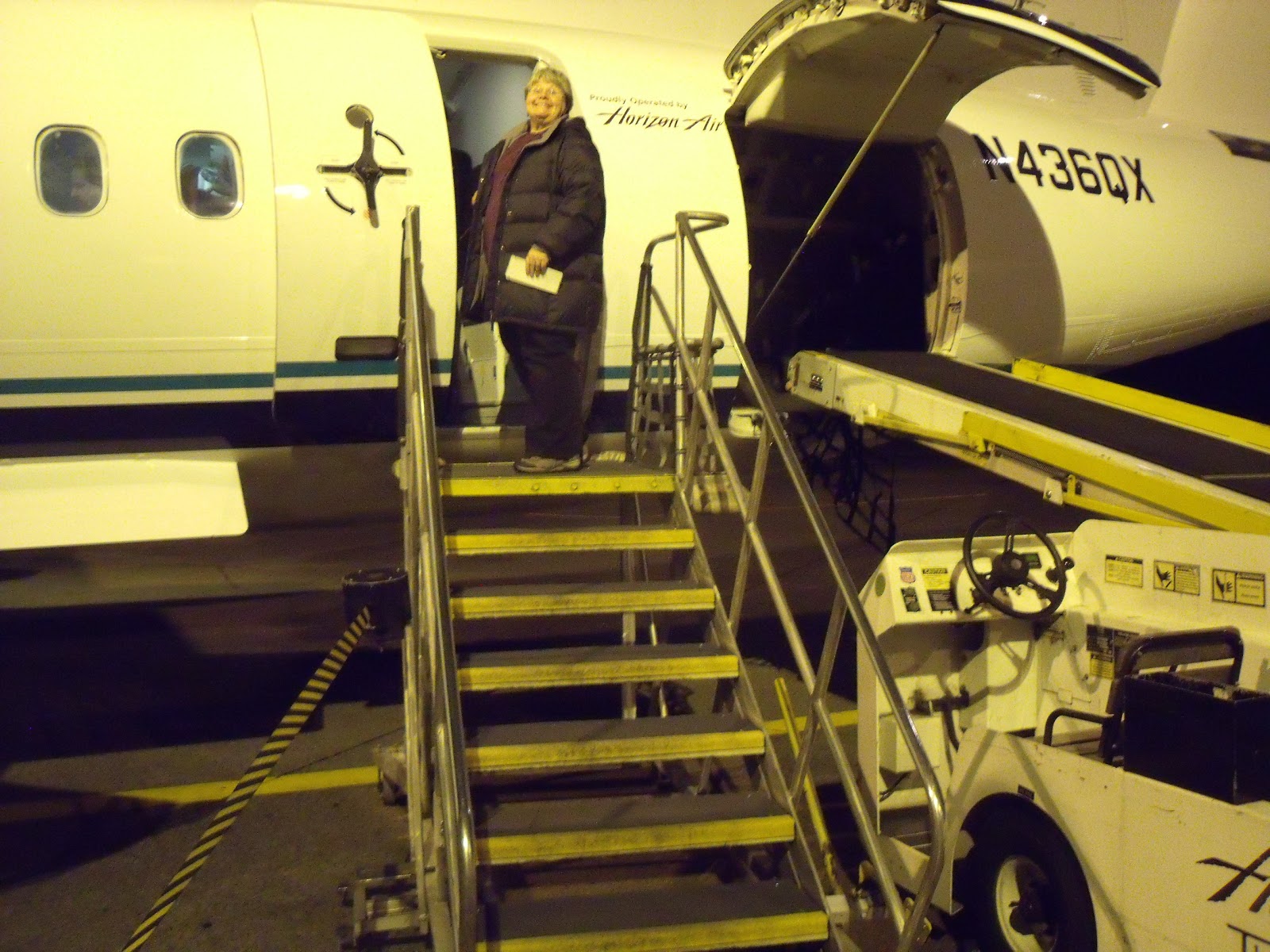 The Alaskan airline flight to Spokane is aboard the 76 seat Bombardier 400. The 223 mile trip will take just under an hour on this Turbo Prop so luckily I had no need to use the outside toilet. Jaq has a big smile as this is the flight to the grandchildren. 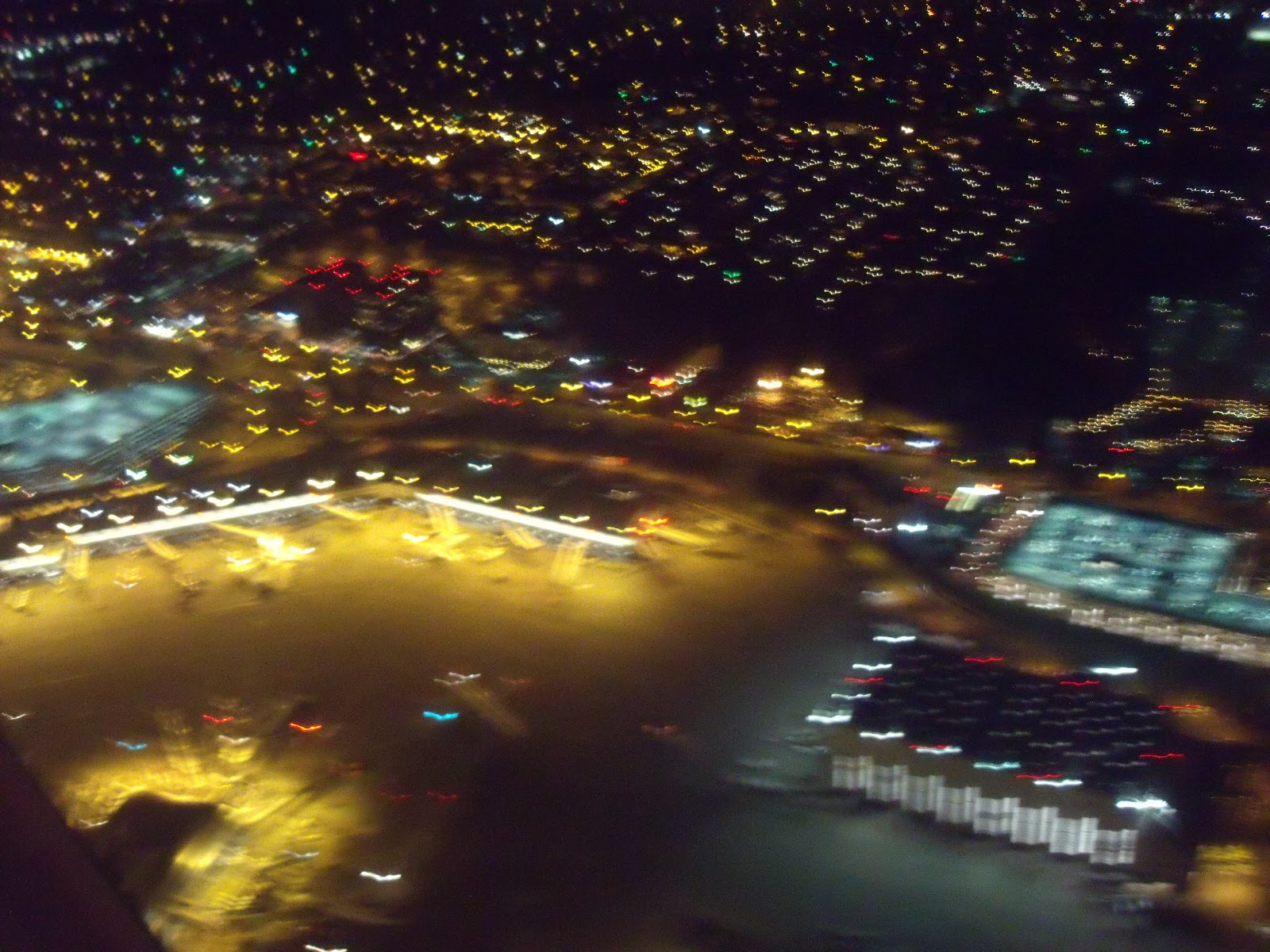 Left the camera saw this as we banked around after take off. The terminal far left centre with planes still on the stands (white lines).
Below Spokane has had snow but it is melting and the roads are clear. 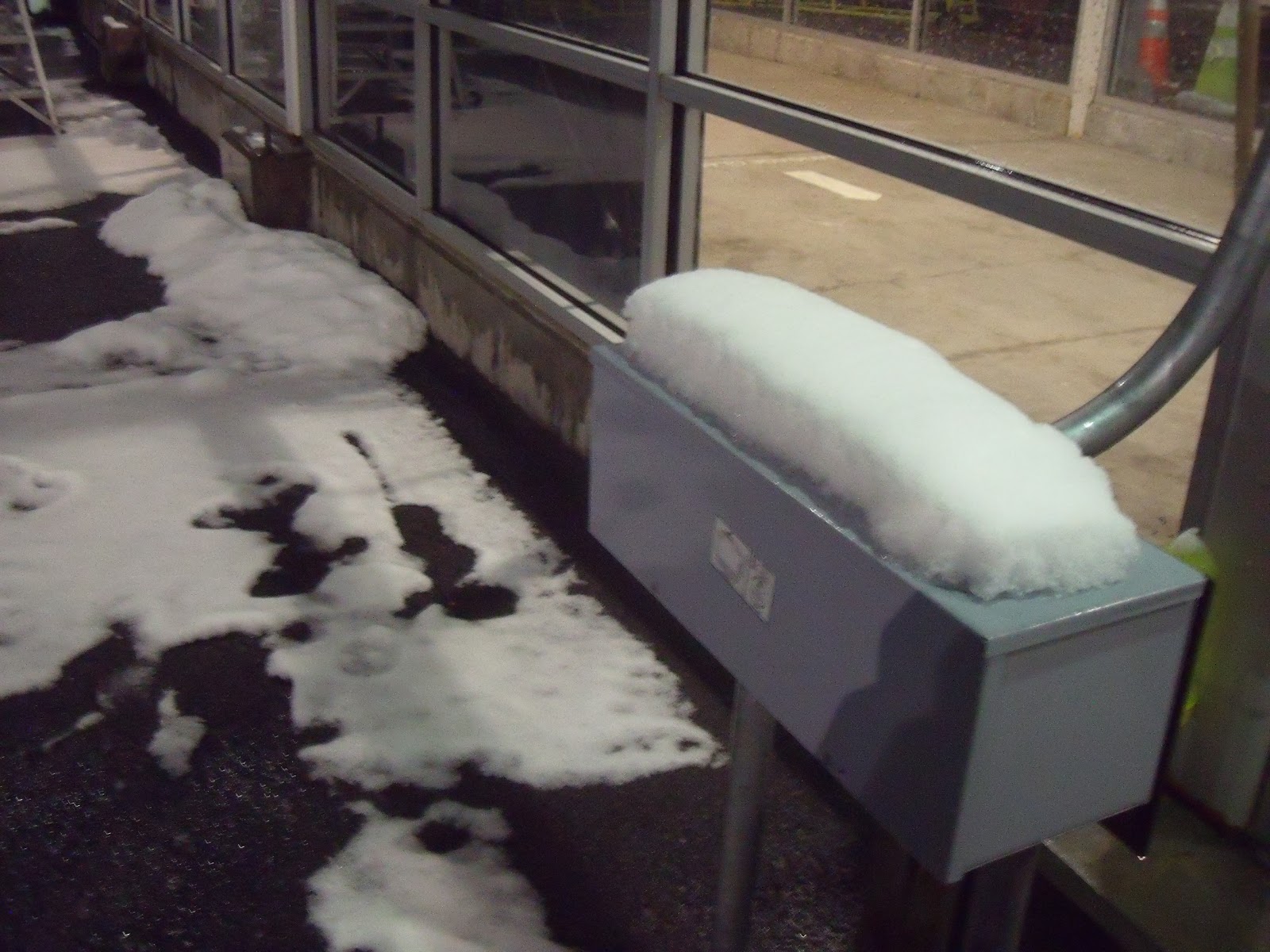 That is a long way from the quiet towpath mooring at Huddlesford junction ! Worthwhile trip though, have an enjoyable visit and a safe return,

We were on the I5 last night, San Diego airport to San Marcos California. No snow here!
Love,
Sue & Ken

Yes Nev it certainly is a long way from the peace of home. It is wonderful to see family and friends but I am sick for home and the boat. Two more weeks and we return!!
JaqX

LOL! Sue, I am having culture shock with this return. I-5 is an example of how BIG everything is. Funny, if we had kept going south we might have met up with you and Ken. Enjoy your Cali family visit!
JaqX

Hi guys - you certainly getting about. Looks like you having a good time. All OK here and thank you for the ecard for Andys birthday.
See you on your return.

Hi Tina,
I hope Andy had a great b'day. Thanks for letting us know things are all right. Missing you both and excited to be back home soon!
JaqXX

They use the Bombardier 400 between Southampton and Jersey, noisy but did the job and at least u can see the prop turning lol