Arrived tired but all ok

Arrived here in Portland late Monday. Our body clocks were set to 4am UK so it had been a long day.
Late leaving Heathrow for reasons not quite sure but they put it down to a terminal problem but I know for a fact the terminal was there all the time and did not arrive late. 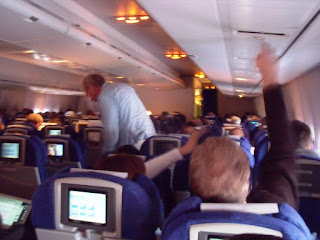 So up we go a feat that never ceases to amaze me with up to 900,000lbs. being lifted into the skies. Four hundred passengers in three classes,ours was cattle class all crammed in, first class would be nice as i`m sure they get extra straw and a tad more hoof leg room. 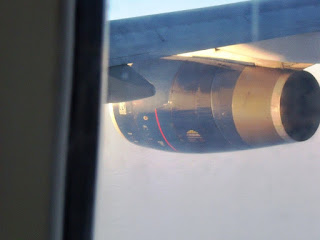 After a few of the 9.5 hours this ordeal will last we have been fed and watered and read a few pages of a book. Trouble is  it`s not the same as stretching out on the boat and consuming a few chapters so before long you have to get up and stretch your legs and ease the cramped muscles. Back in the pen seat I gaze out and looking forward one of four Rolls Royce engines is working away in -56C/-68F and you get to think you have no control of the situation your in. Firstly you need the men/women who behind a locked flight deck are flying this, for want of a better description, extra long narrow boat with wings and alternatively placed bow thrusters. But that`s fine I`m thinking but what about the men who built those engines or the man who checked it out and said `yes it is fit for purpose`. I remember near to where I once lived Leavesden Aerodrome was the home to Rolls Royce but now the site is used for film making with James Bond and Harry Potter being two to have used the site. So wherever the engines are made  I`m thankful that someone cared to do a great job because we can`t just pull over and call the AA(AAA in U.S).

So the seat back TV monitor is showing our progress and giving some flight figures. 36,000 feet  at 533mph. 4 hours and 55 minutes of this 9.5 hour journey is the time left to cover the remaining 2,200 miles against a 24mph head wind. 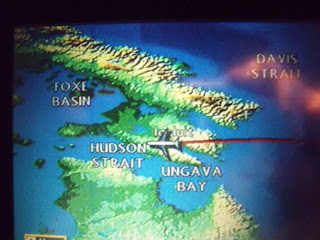 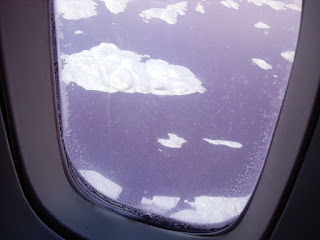 This is the view out of the window as we approach Hudson Bay. We have flown over Wales and Ireland. Following  this we passed to the south of Iceland and flew over the cloud covered southern tip of Greenland. 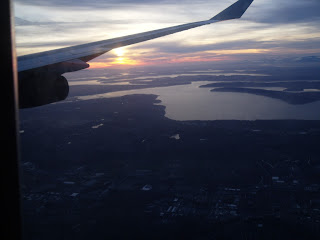 The last part of this 1st stage is the arriving at Seattle and flying over Pugent Sound  just as the sun sets over the Pacific Ocean.

While you're in the neighbourhood, see if you can check out the wonderful Portland based band 'Pink Martini'...

Saw them in Cambridge, UK, at the Folk Festival, then more recently at the Corn Exchange, then the next day at London's Albert Hall.

Have a fabulous trip!

Jaq, Les,
And a week tomorrow we set off on the 11.5 hour flight to California. Will we be in the same time zone for Thanksgiving?
Two weeks with our family and then 3 days in the Johsua Tree National Park - Sue's first experience of real desert and the spectacular night skies.
Our love to all of your family,
Sue and Ken nb Cleddau

Hi Sue/ken
Yes same timezone.All the best to you both. Nice for everyone to see grandchildren so far away.
Les

John
Just checked their site and all days that we are here are sold out.
Les

I used to fly a LOT businesswise, and even today I still dread flying. I hate every onboard minute, I am afraid of every tiny bump - thank Gods you arrived safe and had a good flight! Have a great time in the US and enjoy!

The engines are now made at Rolls Royce in Derby