On the Bridgewater Canal the bridge holes are much wider than BW canals and this is reflected by the size of the stop planks. These are inserted into grooves on each bank at bridge holes to 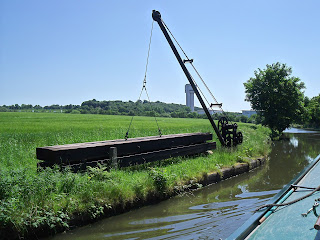 form a barrier that holds in water in the event of the canal breaching and means the breached section can be isolated for repair. In the pic above a crane is the means of inserting these longer and heavier planks, on BW waters they can be inserted by hand. 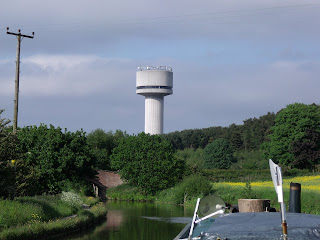 At Daresbury the skyline is dominated by the tower on the Science & Innovation Campus. What i did find out was it`s a "Particle accelerator tower" something to do with Nuclear Physics but for more info have a google because i got bored trying to find a link for you. 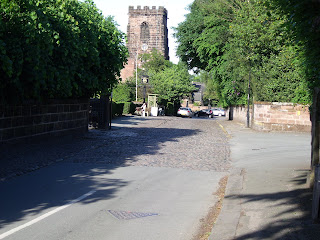 Above St. Wilfred`s Church at the end of a short cobbled street in the original village of Grappenhall on the south side of the canal. Grappenhall has now expanded north of the canal and has merged into Stockton Heath where at brdg15 a short walk to town will bring you to a large swing bridge over the Man. Ship Canal next to which is a Morrison's Supermarket.

While we are mentioning Stockton Heath, hello to Richard and Lynda on Pendle Warter who i finally met after lots of e mail during their trip over the Leeds & Liverpool canal last year.

The cobbled street of Grappenhall featured in a Sherlock Holmes film as did the village hall after some cosmetic changes. Worth a 2 min walk from the canal even just for a quick look and a pint at one of 2 pubs, i think the one nearer to the church is the best.

Next place i wanted to take a look at was the village of Thelwall and the nearby penny ferry across the Ship Canal. Below Thelwall Underbridge 19a in Nicholson's guide walk north and you arrive to the spot i took the pic below. It is said that in 923 King Edward the elder founded a city here and called it Thelwall. 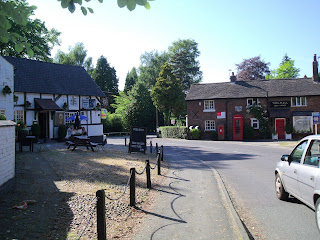 The Pickering Arms on the left dates back to the 1700`s and on the right amongst the 19c cottages the tiny Post Office. City living can`t get much better than this. Between the two above mentioned is Ferry lane so i have managed to walk past the pub as i had read of `The Penny Ferry Inn` where a snack and a pint can be had while waiting for the Ferry. Well if you also read this in Nicholson's forget it! The Inn is nowhere near the ferry on either bank can`t even be seen in the distance. So it`s the Pickering on the way back.

Had a nice chat with the ferryman as he was in the same line of work as me before i retired but the brain was asleep and i forgot to take a picture or ask what the fee is now so nice was the conversation.....still that`s the life i lead, the brain does go into super slow mode....bliss. 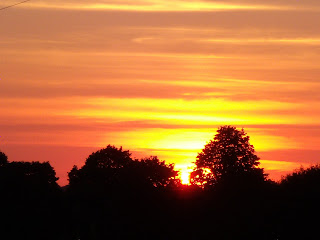 Another nice sunset as another days cruise ends. Andy this is the one when we were chatting the other evening.
Posted by Les Biggs at Saturday, June 06, 2009

Nice to hear from you.

It is great up here as you say, the views are out of this world.
We are almost at Leeds now and have had to buy another Nicholsons to continue.
Hope you are ok,
Regards Chris & Debbie.

Hi Chris/Debbie
I`m fine thanks and enjoying the Macclesfield at the moment.
Once you get through Leeds you`ll be at home on the wide rivers.
Take care.