ON THE MACCLESFIELD CANAL

This is Poole Aqueduct and i am on the Macclesfield canal crossing the Trent & Mersey canal. The T&M has brought me up through the lock in the picture plus a second around the bend in the distance after which 2 right hand turns brought me to here so i am now some 20` above the T&M. The last lock was a nightmare as the bridge by the lock was so low i quickly had to reverse the engine or the tail on the wind genny would have been badly damaged. After removing the tail i found i had no drive and on investigating down the weed hatch found a full length ladies dress around the prop. This i managed to remove quite easily owing to the experience gained all my adult life....if only it carried on in my old age. 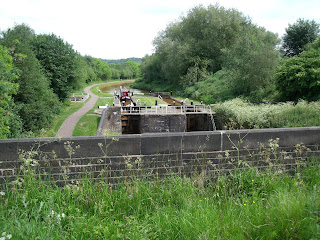 Within a mile the first lock is just a stop lock with a rise of a few inches. Originally there were 2 lock chambers here which accounts for the extra narrow section behind NB Valerie. The reason was the nearby Harecastle mines would discharge a lot of water making the T&M level higher than the Macclesfield so the second chamber only allowed enough water for a boat to enter the Maccie and not a continuous flow. Very possessive of their water were the canal companies in those days. 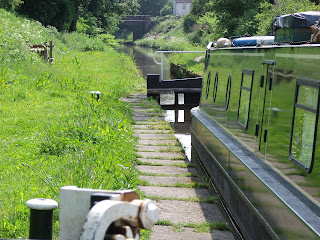 Around the corner the first swing bridge, nice and easy with a quick push from the towpath side and pull it back as you pass through. 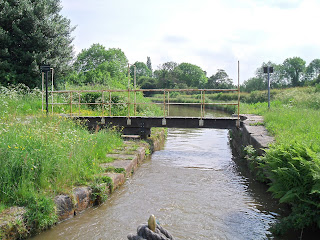 Mr Heron wading through shallow water looking for lunch. Usually they are on the bank so this pic made a nice change. 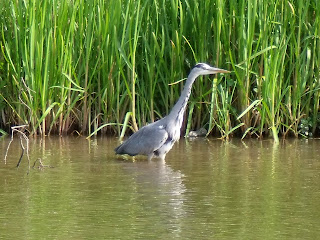 Snake, Turnover or Roving Bridge i`ve heard them called but whatever the name the idea was good. At this point the towpath changes sides and in days gone by a horse would come along the towpath on the left and with the rope still attached to the boat walk over the bridge onto the other path and carry on pulling the boat through the bridge `ole. 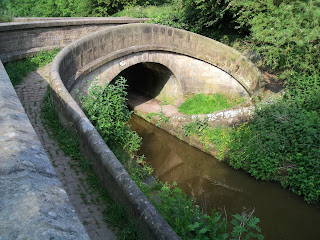 First nights mooring just past Congleton station. on the embankment with a lovely view in both 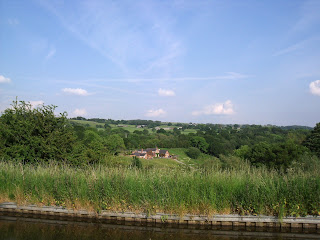 directions which was just as well because i stayed 3 nights because of high winds and rain. My 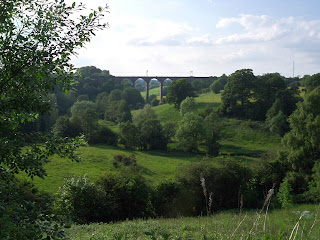 philosophy is "there`s always tomorrow" so why stand on the back in the wind and rain.
Posted by Les Biggs at Friday, June 12, 2009

We're coming up behind you, came through the tunnel this morning. Now moored where you took your photo by the acqueduct. We may stay here for the weekend but if you want company up to Manchester just yell.
Take Care Dot

Hi Dot/Derek
Not going to Manchester. Will be returning down the Maccie as have some commitments down south soon.
Will look out for you both on the way back.

Hi Les, Just to let you know we are following your adventures. Still a good read. Do go into Bugsworth basin if you get that far. Whaley Bridge is an OK town.
Chas n Ann

Hi Chas/Ann
Hope you are both well and yes Bugsworth is a must see for me on this trip.