ALONG THE MACCIE` CANAL

The peace and tranquility of a life afloat is reflected as i cruise the Macclesfield through mostly open countryside with just a flight of 12 locks with wonderful views to do before i reach Bugsworth & Whaley Brdg.

The maccie opened in 1831 and is 27 miles long and once the locks at Bosley have been negotiated you are on one of the highest navigable lengths at 518` above sea level. It`s route was planned by Telford and built by Wm. Crosley as a short cut from Manchester to London but gave good service to the mills and mines along it`s route.

All the bridges are of stone rather than the more common brick construction and the aqueducts, cuttings and embankments plus not forgetting the six snake/turnover bridges all come together for a very enjoyable cruise. 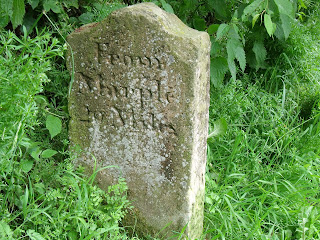 The miles pass marked by these gravestone looking mile posts. All with the exception of 3 were restored by the Macclesfield Canal Society in the 80`s after being buried in WW2 so as not to help enemy forces. The 3 lost stones were replaced with local cut stone. 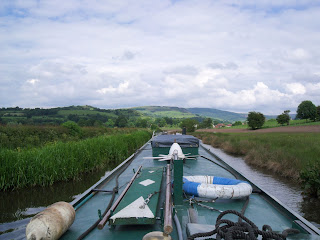 The scenery gets better as the canal proceeds west of the Pennines. 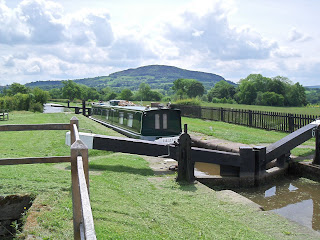 About halfway up the flight, this must be better than climbing the locks out of Manchester. 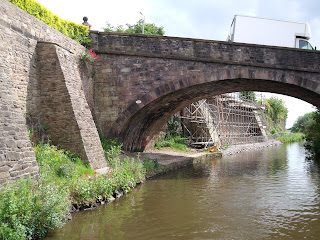 The high retaining wall just before Macclesfield collapsed in March 2008 and although the towpath is still closed good progress in the re-building has been made. Evidently there is an access road at the top and several vehicles were stranded after the collapse.
The picture below borrowed from the wonderful site of Pennine Waterways shows the
vehicles stranded and the towpath blocked for all except the local rock climbing club. 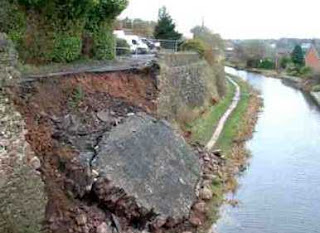 Just past the collapsed wall rounding a bend and the magnificent Hovis Mill comes into view. Built in 1820 now converted to flats with a 4th floor 2 bedroom fetching around £125K.
Flour was milled here until 1904 before being transferred to Manchester. On the lower level can be seen the arch that allowed boats to enter for loading/un-loading.

Having passed through Macclesfield and seen the limited moorings i`m glad i decided to stop at Oakgrove Bdge 49 and get the half hourly bus into the town, the bus stop is next to the electric swingbridge. 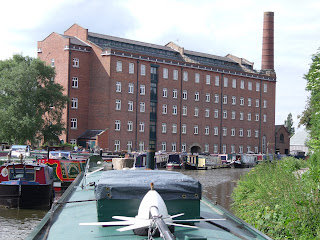 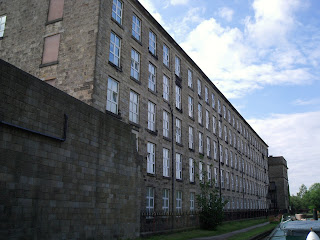 Above Adelphi Mill at Bollington that produced not flour but silk now converted to small office units and below Clarence mill produced textiles and is now small manufacturing units. 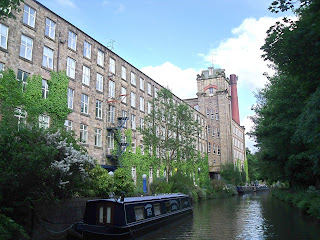 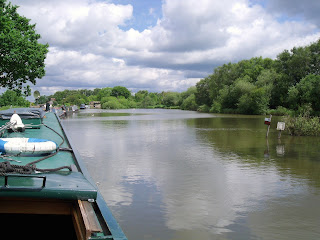 Above my mooring for a couple of days just before brdg 15 at Higher Poynton where the canal has widened due to subsidence from coal mining.
Posted by Les Biggs at Sunday, June 14, 2009

Hi Les, Mark Haverland here. I follow your blog a lot. Thanks for the great pictures and videos. I also follow "TEN BOB NOTE" as well as a few others. Do you know what has happened to "TEN BOB NOTE"? His site returns a "404 not found"
error notice. He is currently a solo traveler as you are. Should I worry?

Hi Mark
Have e mailed you but for the benifit of other readers "Ten Bob Note" is fine but is not blogging at the moment.