Leaving Anderton i have decided to take a return trip up the Bridgewater Canal to visit a few places I missed on a previous trip as you can`t possibly see everything at one visit or you would be mooring every other mile.

The Trent & Mersey canal continues to Preston Brook Tunnel but before that point 2 other tunnels have to be negotiated the 1st pictured below is Barnton at 572yds no big deal except great care has to be taken as it is by no means straight and you have to be at a specific angle to glimpse the daylight at the other end.

The next one is Saltersford Tunnel at 424yds is crooked and boats can only enter from each end at specific times which at this time escape me but it`s something like on the half hour for 20 mins going north and a different timescale coming south. 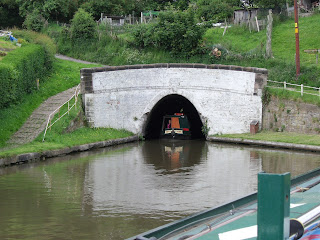 Preston Brook Tunnel 1239yds is the 3rd and the time here is on the hour northbound till 10 past and south on the half hour again for 10mins after. Once through Pres. Brk Tun. you are on the Bridgewater canal owned by the Manchester Ship Canal company who allow BW licenced boats 7 days without charge and i believe BW have a similar concession for Bridgewater licence holders. Eventually at Leigh the canal changes to the Leeds & Liverpool so 7 days is plenty for boats to pass through the Bridgewater not that anyone seems to check.

But my journey is only to go as far as Lymm and then turn to go south again towards the Macccclesfield and Peak Forest canals. Now before any boaters tell me i know i could have carried on through Manchester to achieve this but Manni is a big city and the Rochdale 9 have to be climbed then the Ashton flight and as i have heard the stories of the kids jumping on boats and swimming in the locks i decided i want a no hassle peaceful life and prefer my intended route.
Maybe one day when i get some more shells for the bow mounted cannon i might venture up that route at the crack of dawn.

Now where am i, oh yes on the Bridgewater and my first place to visit is the Runcorn Arm so a left turn and about 5 miles into Runcorn and moor up to visit the old filled in flight of locks that went down onto the Man. Ship Canal.
Well that was the plan but as i cruised under graffiti bridges and passed just 2 places boats were moored on a permanent basis complete with boarded windows to stop the local stone throwing low life i did a u turn at the end and went into plan B mode. 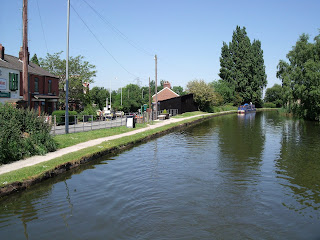 the little general store/post office and just around the bend good moorings with views across open fields and yes it does bend away from the road so peaceful as well.
Just to the left of picture Runcorn well the bus stop that will bus me in 25mins for free and no worry of coming back to a smashed window or worse. 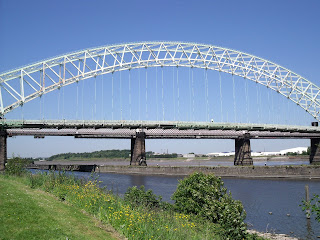 The bridge above 1092` single span takes the Runcorn Widnes road across the Man. Ship canal and the River Mersey. The ship canal in the foreground and the Mersey through the arches of the adjacent rail bridge. Looks like it`s all one in the angle of the pic but it`s not. 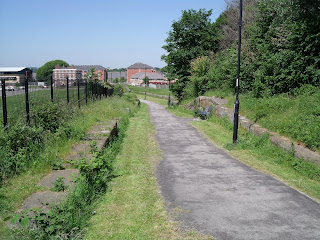 Above what remains of part of the lock flight down to the Ship Canal and walking between the lock walls on what is now a pleasant walk through parkland brings you down the last lock below at the Ship canal. The road bridge is just a short walk to the right. 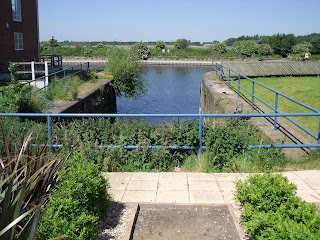 So perhaps some might say was it worth all the effort after all Runcorn town is nothing to get excited about in fact i would rather walk around Tesco or M&S but the point is the Bridge and locks were something that interested me and as i have the time.....why not.
Posted by Les Biggs at Thursday, June 04, 2009

As to the kids leaping onto the boats, they stopped all craft leaving Leeds the other day in the hot weather as they were leaping off of the bridges as the boats went past trying to soak the people aboard with the splashes they made.

I remember last year at Ferrybridge lock the kids took over the lock in the evening and used it as a swimming pool.(May 2008)