The Ashby canal is navigable for 22 miles presently terminating just north of Snarestone a small village that stretches across the top of Snarestone tunnel. The canal once went on to Moira 8 miles further on where the canal is in water but the bit in between is sadly filled in but the Ashby Canal Association is making good progress to restore navigation through to Moira.
The section navigable at present is very much a rural canal with Hinckley and Market Bosworth being the best places to obtain supplies but with my freezer stocked up the need for shopping need not be a problem.
Some very nice remote moorings can be found but the canal is very shallow in places but keeping the boats speed down overcame this but getting in to the side to moor for the night was a matter of trying several spots. 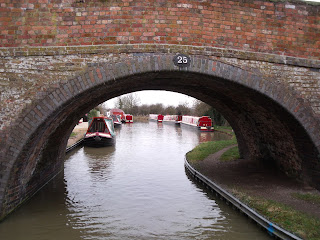 Looking back through the bridge at Stoke Golding the hire boats of the Ashby boat Co. sit waiting for folk to arrive for their hols but perhaps it will be Easter time before the boats will spend most of their time away from base. 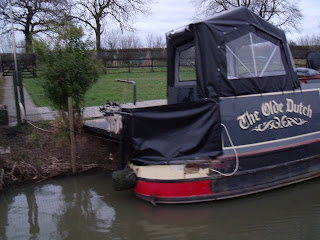 Just a bit to late with the camera to get a clear shot of the 3 pooches on the back of this boat. Nice looking dogs but no idea what breed. 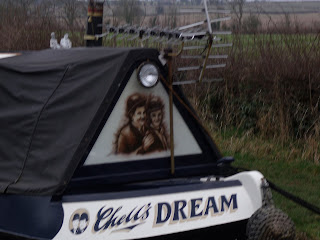 The owners of this boat are obviously Laurel & Hardy fans. 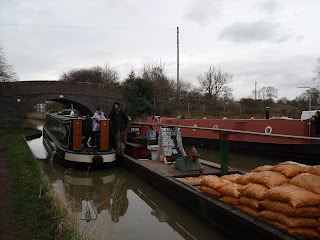 Came across Gosty crewed by Ian & Alison and took on 120litres of diesel. Now the usual practise nowadays is to declare how much diesel is to be used for propulsion or heating and electricity generation but Ian sells only fuel for the latter and after listening to his Customs & Excise speech i agreed that is what i intended to use the fuel for and he filled my tank at 59p per litre. 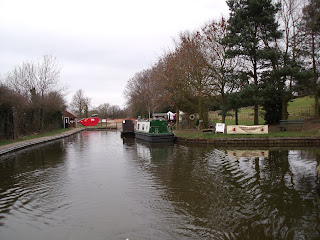 Above the at present end of navigation at Snarestone with the winding hole to the right and full boat services ie water, elsan and rubbish bin straight ahead. I turned and reversed back to use all 3 services taking the time the water tank filled to have lunch. Before leaving i walked over to 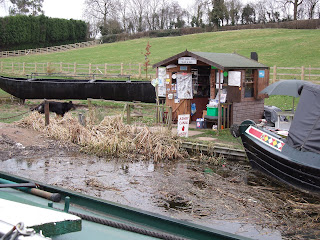 the Ashby Canal hut and left some books to be sold to boost restoration funds. Just to the left of the hut is an old ice breaker boat that would be towed by horse while several men would stand in the boat rocking it from side to side to break through the ice. You can just see the handrails the men would hold onto.


Below are the many mobile homes that line the canal at Marston Jabbett on the southern end of the Ashby Canal. 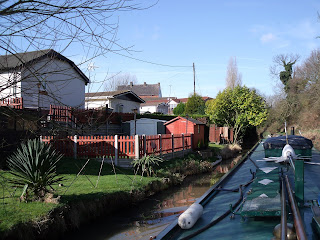 While on the Ashby I spotted fellow bloggers John&Fiona on Epiphany but as they were in a marina a picture was not possible just a friendly wave. That was a few days ago and just before writing this blog they passed by again but I was moored up doing some general maintenance and fuel filter changes so could only pop my head out of the engine bay for a quick hello. 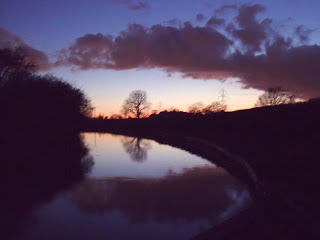 Took this pic on one of my remote Ashby moorings and as it`s now time to put another log on the fire and think about cooking myself something i bid you goodnight.
Posted by Les Biggs at Monday, March 02, 2009

Hi Les,
Who's that gorgeous person in lilac in the fuel boat pic?

Sorry but that info is on a need to know.....and you don`t need to