The 5 senses are Sight,Hearing,Smell,Taste and Touch but the one that played a part in the title of this blog was Touch. At my usual bedtime of 1am ish i toddled off to bed and as i kicked off one slipper it was my foot touching the carpet that gave the game away because it shouldn`t have felt cold and wet. On with all the lights out come the drawers below the bed and water every where. The hot water tank had sprung a leak, and that`s what i will call it as califier or califerer or whatever the stupid name they call it at the end of the day it`s a hot water tank.
As luck would have it a boat yard was just an hours cruise so the only thing to do was turn off the main feed and the water pump and go to bed, at least the bed being high meant i had somewhere dry to kip. 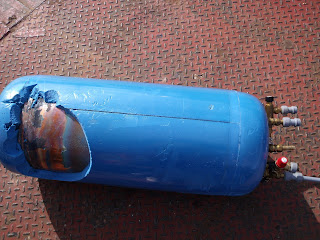 The hot water tank (above) had split on the seam that joins the rounded bottom to the tank, you can see the black marks and further up just out of picture the seam had split open.
The boatyard had to go and collect a tank from a wholesaler but at least the job was started and finished the same day. In day`s gone by i would have done the job myself but do you know what i just couldn`t be bothered so i let them do all the labouring.
The only thing i did was to strip off the bed down to the frame and in the pic below you can see where the tank was located with the 2 white metal straps to hold it in place. 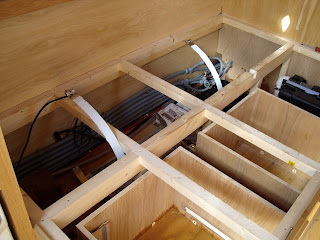 the worst area of water damage was to the left of picture and below shows the water stained end panel of the wardrobe at the foot of the bed. 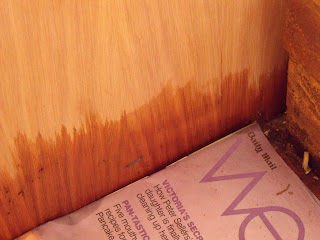 The water under the floor was quite considerable and an industrial wet vac was used to remove it but still water is finding its way to the back of the boat and days later i`m still using newspapers to soak it up. Movement of the boat causes the water to find its way around the tons of concrete slabs used as ballast and end up below the rear hatch under the stairs eventually the paper will do its job and just now have taken a look and the last batch of paper i put in yesterday is just damp so good news. 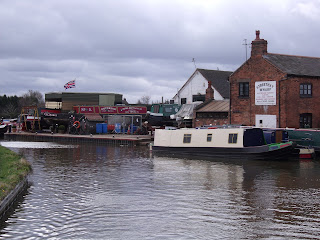 This is the yard that done the work Streethay Wharf near Litchfield on the Coventry canal and i do recommend them for good service providing me with a berth for the night and and electric hook up.

Hope you are like me still following youngster Mike Perham as he sails solo around the world.

What a nightmare I hope the water damage isn't bad and will dry out without too many problems.

That's you and Gypsy Rover with the same problem within a week! What a bugger?
Lesley

All drying out slowly with no sign of permanent damage to woodwork.
Yes D/D on G. Rover were telling me about the joint weeping trouble is mine was the seam that had split so not in my opinion worth trying to repair.
Back to normal cruising now.