The Coventry Canal has been the water beneath my boat since leaving the Oxford at Hawkesbury Jct. now in the pic below it becomes the Birmingham & Fazely Canal. I have come in on the Coventry from the left and the B&F comes under the bridge and off to the right.
All sounds fine like leaving the M1 and onto M25, but the difference here is that without another junction the canal suddenly once again becomes the Coventry as Tommy Cooper would say "just like that". 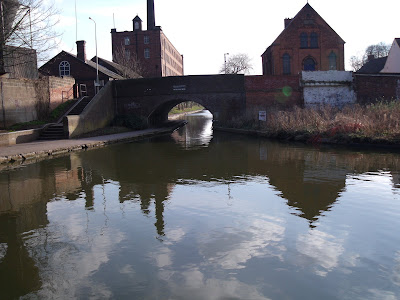 Hope the map helps, as you see the white of the Coventry joins the blue B&F at Fazely then reverts to white Cov untill it reaches the Trent & Mersey at Fradley Jct.

I borrowed the map from Jim Sheads Waterways.
What happened was that in 1768 the Coventry canal co. started digging their canal with Fradley jct. their destination but by 1771 they had reached Atherstone and had run out of cash and when funds allowed the canal reached Fazely in 1790. But because of the slowness of the Cov. Co. the Birmingham & Fazely canal had long since reached Fazely from Birmingham and in fact carried on following the route the Coventry canal co. had obtained under an Act of Parliament as far as Whittington some 5 miles on.
The Trent & Mersey co. cut the canal from Fradley Jct. down to meet the B&F at Whittington. In 1788ish the Coventry Canal co. bought the section they hadn`t built for £10.500 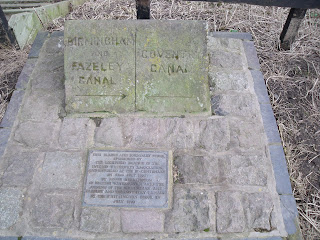 The picture shows the spot that the Birmingham&Fazely meets the Coventry detached as it`s known.
A difference between the canal companies is the way that The Coventry number their bridges whilst the B&F name them.
Posted by Les Biggs at Thursday, March 12, 2009