Locks on the Lee and Stort

Locks along the Lee and Stort are full of surprises and you need to send your crew not only with a windlass but also your waterways key and perhaps a.... compass!, read on it`s further down the page.
Sometimes there will be two double locks side by side and just as often a solitary double. Worth noting now the `double` locks on the Stort are not capable of taking two narrowboats at the same time. Both navigation's locks are 85 feet long but the Stort has a 13 foot beam 2feet 9 inches less than the Lee locks.
The interesting thing on both navigation's is the varying operation of each lock. A picture saves a thousand words so let`s go that route. 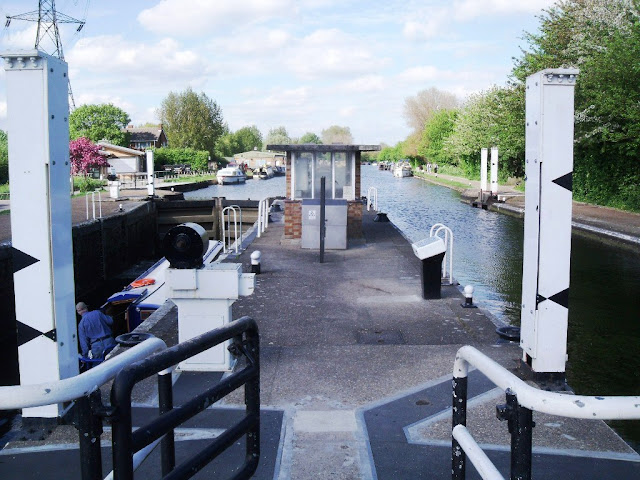 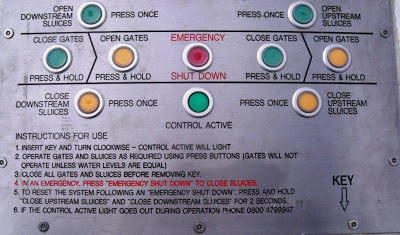 Above are twin locks but with completely different methods of operation. The lock on the right is fully electrical in operation. The console (left) is by the ladder in the top picture. Pretty self explanatory as you stand in front of the unit but for our U.S. and other readers not familiar let`s just explain.
The lock on the right is ready for a boat to enter and be lowered down to the  next river level, you can see a boat at the lower level in the adjacent lock on it`s way up.

Our boat enters the lock and we press the left hand gate close button.
The sluices allow water to enter or exit the lock depending on your going up or down in the lock.
The White posts are at each end of the lock and indicate the position of the sluices.
The one in the picture indicates the sluice is down(closed). This should also be the case at the other end of the lock as we don`t want any water coming in at that end.
Think of emptying your sink at home with the tap on!

So now we need to let the water out of the lock to lower the boat down. By pressing the right hand sluice button just once the sluice will rise in stages until fully up. When the water stops draining the gates open button can be pressed and the boat can continue it`s journey.
Ok sorry if the above bored some of you but I know for a fact many of Jaq`s friends etc. have no clue how we travel through locks.

Normal practice on the canal system is to close all gates and sluices as you leave. Here on the Lee and Stort the norm is to leave everything open and just carry on so expect to close gates and paddles at most locks. 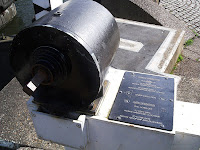 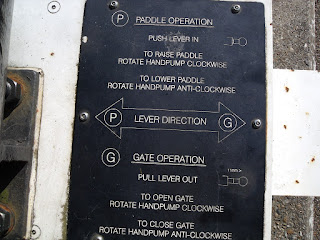 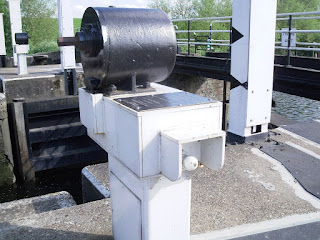 Still at the same locks but this time the left one. This one is manually operated with a windlass- a metal handle that fits the shaft of the lock mechanisms- that with the aid of hydraulics operates the lock gates and sluices. At the side of the unit is a lever that has to be positioned according to what function you want to use. Lever in for sluice/paddle and lever out for gate. Did you notice the singular in the previous sentence? Well the reason is each gate and paddle has to be operated separately from each side of the lock.
In the picture on the right you can see the lever for selecting gate or paddle and across the lock the second unit for the other gate and paddle. Good luck if you use this one because the way gates etc. are left open you could have a lot of winding. Boaters aware of the Hatton locks will know how much winding is needed to open paddles, imagine all that winding for each gate as well. 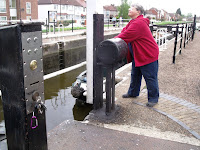 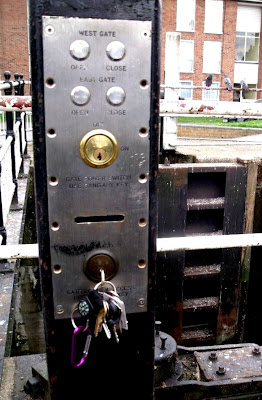 Another type of lock operation is the electric post shown on the left. This is only to operate the lower gates. Upper gates and paddles are normal push and wind operation. Now just in case you can`t read the button markings they are open/close and west gate/east gate. Did you bring your compass?  Don`t laugh but Jaq was taking her turn on lock duty and shouted down "which way is East Les" Thinking we were having a cultural moment I climbed up to see what the problem was. Being a man I wasted no time figuring points of the compass and just pressed each button in turn. Perhaps `Near and Far` might be good substitutes for East and West but what do I know.
The paddles are operated by the hydraulic winding as demonstrated by Jaq above. 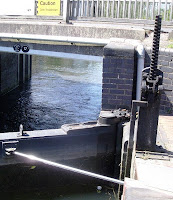 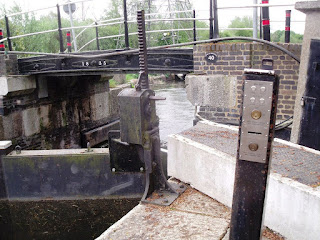 Yet another lock has the electric gates and a more familiar paddle gear. The one on the right has a fat what i  think is the gearing box. Not sure about the position of those gate arms. They look to be vulnerable in certain circumstances. 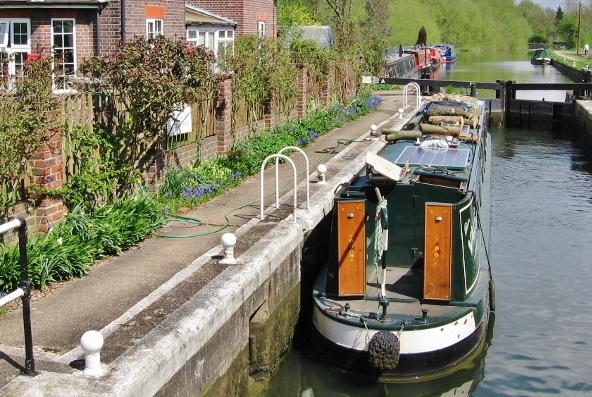 Finally we have this lock. Can you spot the oddity about this lock?  No! OK let me step into the picture and show you. 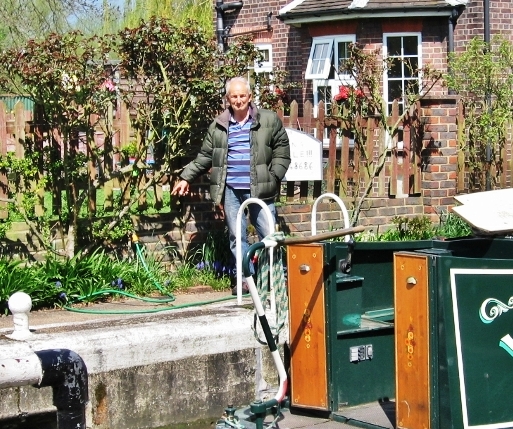 Yep it really is the water point. Now whether the tap was outside the lock at some time and for some reason has been moved is for someone with local knowledge to point out. For sure a water point is marked in the Nicholsons map book but it mentions nothing about it being in a lock.
So just as we were finishing along came two boats to use the lock. One came in and was fine about waiting till we finished and we all chatted as boaters do. I could just imagine this lock and water point in certain places on the Grand Union canal, it could lead to violence.

I found your instruction on the locks and how they work for you longboat folk very interesting, Les! You're right...most of we Americans don't know anything about them. The pictures you included really helped me see what the heck you were talking about. LOL
Carry on!
Hugs to your wife. :)
~Kat

It's Monday evening (May 20) of our Victoria Day weekend, a holiday celebrated in most of Canada except of course Quebec as it wants to be politically independent. Don't go there!

Locks, my first thought was here in Canada they'd be labelled in English and then French (Quebecois) to satisfy the federal language requirements and that in turn would means twice as much space would be needed for the instructions, diagram and sub-notes. French is a very wordy language.

Having noted all of that, find the
entire exercise to be somewhat confusing. NWhat happens if the electric lock doesn't function due
to say power outages during a portion of the up or down operation and the opposite lock is either in use or some other incident happens.

Of course you're not on a schedule, you wait and enjoy the scenery.
Keep forgetting your schedule is your own. That of itself is wonderful.

As for the water tap/spigot/hose pipe, if no guide book was provided you'd have one heck of a time finding same.

And my other question, how do you know the water is safe to consume, that is from whence did it come, besides the tape/spigot/hose pipe?

Lovely day here, 18 degrees C at 18:43. Had a wonderful meal of freshly cut asparagus, steamed
and then covered with a brown sugar and unsalted butter sauce, over a dish of freshly cooked pasta.

The asparagus came from a good friend who grows it commercially and gave me a six quart basketthis morning. The balance shall be washed
and frozen in bunches and placed in plastic bags in the freezer for later use.

Locks:Sort of up the down staircase?

Hi Bryce
if anything goes wrong we have emergency phone numbers to the waterways people. They are very prompt coming out to sort any problems.
The water taps are linked to the normal house drinking water system. We are not metered as the water is included in the licence as is sanitary waste stations and rubbish/trash. The licence for our boat is about £790 so good value.