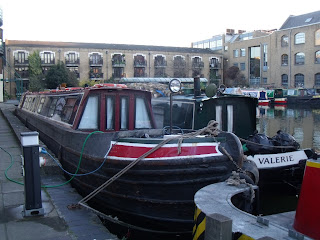 We decided to leave Paddington and stop the night at the canal museum to break the long journey to the River Lee. They charge £8 ($12) and water and electric hook up is included plus very secure moorings. Best to book in advance as space is limited.
The boat we are moored alongside of is a 1937 working boat named Tarporley, that is now a community boat.
I hope when we departed at 8am on a Sunday morning we didn`t wake anyone around the basin. 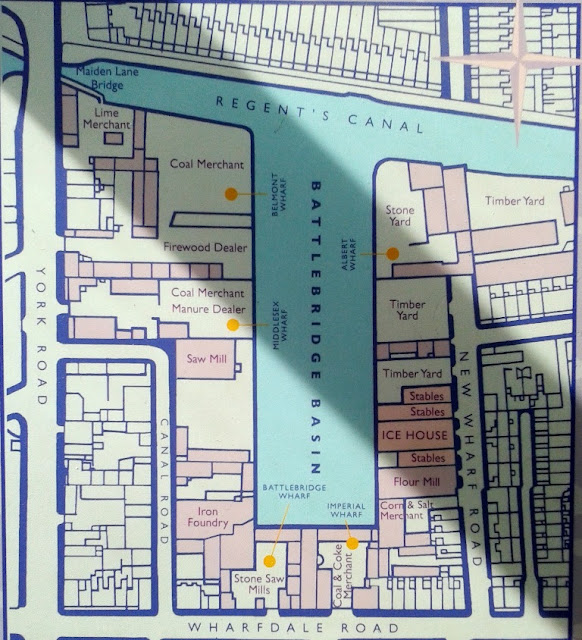 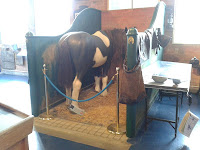 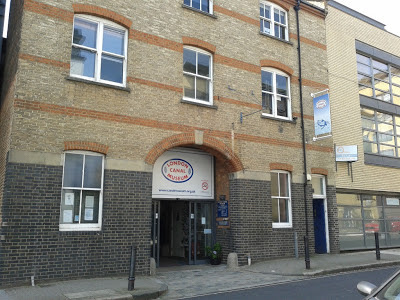 The canal museum building was once an ice house and it is shown on the map above close to the lower right of the basin.                             It once had stables either side but the building was re-built in 1904 and the stables were on the first floor.
There was room for about 15 horses plus a much larger corner stall for a sick horse to have more comfort.
When you look at the map of the basin and all the different industries you see stone, timber, flour, iron and coal as pretty normal boat cargoes. Then you notice Manure dealer!  The thing is back in the 1890`s it was estimated some 300,000 horses kept London moving. That`s a lot of S manure.
They were used to pull Omnibuses and delivery vans, the police used them as did undertakers and carriers of all descriptions. Altogether a lot of horse power.
Posted by Les Biggs at Thursday, May 09, 2013

Hi Les and Jaq, Interesting post, sounds a great idea to spend a night in the museum, didn't remember seeing it last time, we shall try and book in when we are in London, hope to get on the Thames at Reading over the weekend and head down slowly to London, enjoyed reading your blog whilst you have been there. Best Wishes Doug and James

Whilst I am reluctant to become acknowledged as an authority on horse manure, much of that produced in London in the eighteenth and nineteeth centuries was transported out to the farms and small-holdings of the Bedford Levels.

Canals would have transported it in the early days. Later, it went by rail.

All the farmers and market gardeners had to pay for was the cartage from the wharf or station yard: the manure itself (finest organic fertiliser!) was free!

It was not at all uncommon for them to use at least 100 tons per acre per year.

No wonder, then, that post WWII, as agro-chemicals relaced the, by then, dwindling supply of Best London Horse By-Product, all the Covent Garden market traders complained to the growers as the quality and quantity of the produce dwindled with it!

London must have stank of horses, though! Imagine.. All that horse poo and wee on the streets. And the dust in the summer! I'll bet it would give modern smog a run for it's money....

Mind you, it's been said before, I do tend to talk a load of manure sometimes......

Coo eee, only me

So London moorings then Paddington basin, and then the canal museum. Any others you'd recommend? We hope to be picking jess up from bulls bridge the last Friday of the month and staying in Paddington over that weekend. Did you book directly at the museum? Haven't had electric hookup for a year - quite excited :)

Hi Doug/James
The museum is well worth a look. Easily visited from paadington basin as is the rest of London.
Les

John
Do you remember smog, thought it was only in my age.
Funny how chemicals re-placed the real thing.
When I was a kid the milkman had a horse and when he dropped his load the people dashed out with a bucket and shovel. Straight on the garden.
Les

Hi James/Debbie
Booked when we visited from Paddington. Breaks the journey when you leave Paddington depending of course where you are going.
Kings X has new moorings just before the museum, blog to come on this.
Also stayed at Stonebridge lock on River Lee.
Les