Well a bit of a shock this morning as the snow was 4" deep on the roof and towpath. This wasn`t the first snow but Monday`s efforts didn`t even cover the grass alongside the boat. Ice has been in attendance since Monday although thin i decided to hang around as the 7 locks ahead of me down into Braunston would have been slippery and solo boating through locks needs care in dry conditions so the thought of a slippery lockside has kept me moored up for now.
How long i will be here depends on weather the temperature rises or falls as the ice on the canal now has a heavy deposit of snow just waiting to freeze over.......wish it would rain........bored...........don`t like being forced to stay in one place. Still could be worse at least i have enough wood cut to keep myself warm. 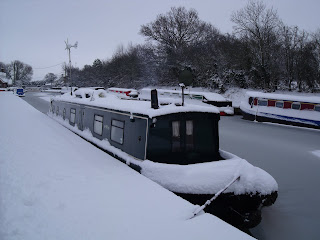 the flight of locks behind me closed on Monday and as you can see in the picture below the canal has been drained so BW can do some repairs, the picture was taken yesterday and you can see the small amount of snow on the ground. Still it was a good time to go fishing not with rod and line but magnet and line......no i`m not going crazy being moored up for so long, what happens is boaters usually hirer`s lose their windlasses ( lock winders) by dropping them in and with the water drained there they are sitting on the mud asking to be rescued. A walk down the flight of 6 locks produced 3 windlasses and 2 mooring hooks. At £10-£15 each it`s nice to have spares although in the 3yrs of my boating life i have not lost one yet. Yes i have lost one into the water on a couple of occasions but with a little bit of fishing around the magnet has always found them.

The fish in case anybody is wondering usually follow the water as it drains down through the locks and any stragglers are netted by BW workers and re-located beyond the drained sections.
Talking of fish 1/2 ton of fish were recently released into the Gd. Union near to Uxbridge after being moved from another location during an environmental project, more on this HERE click on headline news although it might have moved by now so click around the story will be there .

So sitting here looking out at the snow with hardly a sole apart from the odd walker now and again i`m thinking although a bit bored being iced in and unable to cruise at least it`s peaceful and as always on the canal system a relatively safe environment.......ok if you`ve just looked at the link above and read some horrible things happening along the cut remember compared to the real world??....come back to that..... the horrible things are minuscule on the cut when put up against what is reported in towns and cities countrywide.
Real World! Not really a real world or an un-real one it`s just one big one and everyone decides which corner they want to be part of, but for sure the canal world seems to escape the pressures of materialistic life that i was once part of. No credit crunch worries, well not to the extent of people worrying about jobs and paying the mortgage although the interest rates have affected retired savers like myself but heh i can survive it`s not the end of the world a bit less interest.
No at the end of the day when i think of being retired in a house unable to move and see the different parts of the country with my bed and breakfast close at hand my decision to retire on board NB Valerie was a good one. Plenty of fresh air and exercise doing the locks and walking. 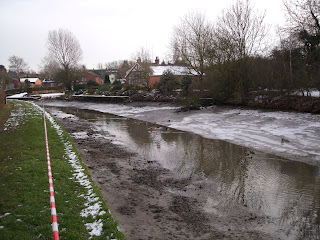 Took a picture of these Snowdrops about a week ago and although i`ve not seen any yet the lambs are in the fields and the days are getting longer so another years cruising is fast approaching in fact as soon as this ice melts it will begin. The Lamb pictures can be seen on Sue`s blog HERE scroll down as Sue blogs regularly and the lamb pics were a while ago. One year Sue i will blog a lamb pic before you. 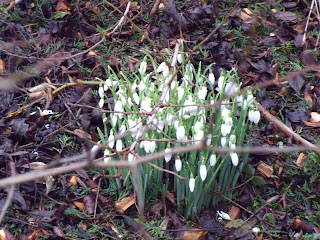 My son Steve runs a wrestling school ACW and also puts on shows in various venues and it just happened that a 15 minute walk a few weeks back when i was moored in Fenny Stratford took me to Bletchley Leisure Centre where he had a show. In the picture below that`s him on the far right taking part in a tag team match. He does it all part time and although on a small scale at the moment it could expand and earn him mega bucks. The crowd at Bletchley was about 250/300 so still some interest around. Anyone remember Ken Wolstenhome... think that was the name...on Saturday afternoons at 4pm with Big daddy, Catweazel,Royal Brothers and Giant haystacks to name a few......showing my age now eh...oh well. Mick Mcmanus another. 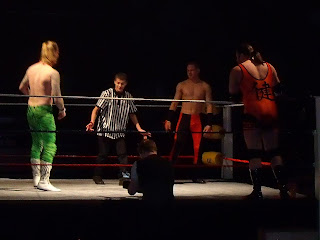 "Kent Walton" - it's amazing how the memories from the old days come back instantly, but what the word I want to say now won't materialise ;-)
Kenneth Wolstenholme was the football commentator - "They think it's all over - it is now" fame.
Coo I have surprised myself - and shown my age!

Think you mean Kent Walton who commentated on Wrestling on ITV.
Kenneth Wolstenholme was the famous "some of the crowd are on the pitch, they think its all over..... it is now!"
Like the blog :-)

Yes well done guys. Ken Walton.
Talk about footie, the L`Pool/Everton game ITV managed to cock up the only goal by showing ads.
Oh well thank god for techo` and we had the instant replay facility.

Ha ha yes.... quality the goal of the season was missed by many but it was liverpool who suffered deep down, never mind though us everton supporters love it !!

Good luck to you if Everton is your team, personaly i just enjoy watching the footie. I will say though Everton deserved to win.