The canal still has a layer of ice and the snow is still around so my progress is zero. But the good news is it`s raining, not a lot but the snow is thinning out and the ice is becoming slushy so fingers crossed there might be a chance to move in the next day or so.
The internet signal here is not great and in fact the pictures on this and the last blog took 17mins each to download/upload?.....put on the blog. Anyway the time taken allowed me to knock up a casserole while keeping an eye on the screen.
Apart from a lot of walking and reading i have also been installing the software for my new camera, sounds all clever and techie but all i did was put in the cd and clicked the things it told me to. One thing i have so far discovered is the image correction option that comes up with the pictures downloaded from camera to PC, this was on the old camera set up but not on the 1st page if you follow and it is so much easier to do without sending the pic elsewhere first plus i can type in titles on the image. OK so you clever pepes know all this but to me a 61yr old who`s only been into computers and digital cameras a short time it`s brilliant. Below is before and after image correction of a duck. 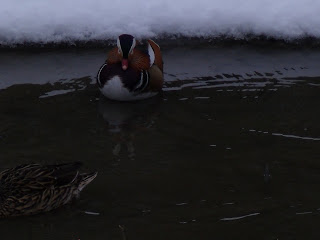 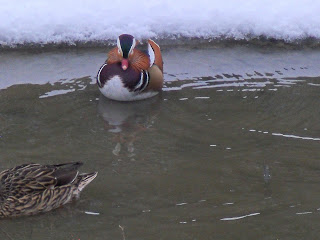 Saturday just gone i decided to get a bus into Daventry to get a few supplies in case the ice age really took a hold. Now on board i keep bus timetable books for many areas and although some are 2 yrs out of date at least i get an idea of routes and up to date times can be found on the net.
The 96 every 2hrs was the one i needed but trying to find it on the Stagecoach site was a nightmare all it told me was D4/5/6 etc and after 20 mins it dawned on me to bring up these and lo and behold one of them was the new number for the 96 route. A 10 min walk down the towpath and i find the name of the house it stops outside, this is rural England no bus stops here remember, 25 mins later watching the cars and vans whizzing by on this cleared of snow B road and i accepted the bus was not running. It was 2 1/2 miles down the road to Long Buckby village that from previous visits i knew 2 small supermarkets and numerous other small shops could be found so that was the decision some exercise and restock the galley.
Sunday morning i discovered that after all that walking Saturday i had forgotten to get milk! Yes i felt the same as you`re thinking, Dumb idiot. No matter a 35 minute walk along the towpath and right beside the canal is Watford Gap services on the M1 and good old W H Smith sold milk.
On the walk i did spot some fallen wood so if log supplies get low then i can at least lay my hands on some and it was a nice day for a stroll anyway.
have been watching the BW crew taking out the old lock gates at Buckby today and will put some pics on the next blog hopefully when i can be somewhere with a better net signal.
Posted by Les Biggs at Monday, February 09, 2009