Last w`end i took a trip to visit Andy/Tina whom i cruised with for 2/12 yrs. I was guest aboard `YTENE` for a nice meal and Tina was quizmaster asking "where were we" on different dates during our cruises using her detailed cruise log. Sunday night up the pub finished off a lovely w`end, thanks guys see you both later in the year.
While in Braunston it was good to see Del & Al on `DERWENT 6` arrive after being iced in on the Leicester Arm. Didn`t get a picture so click the link there`s one on their blog. Again a nice evening in the pub together with their guests Len & Terry. I wish you happy cruising in this your 1st year on Derwent6.
So on with my cruising and after doing an oil change and installing a pump to the engine sump, i better explain to those that don`t know. The method of removing oil from the engine was by way of a hand held pump via a tube down the dipstick hole. Now a large number of engines have the pump permanently connected to the engine sump drain plug so all you do is open the valve place a can under the pump spout and pump out the old oil. So now NB Valerie has one and it`s so much easier and cleaner.
Up the Oxford through Rugby is my chosen route on my way to the Welsh Llangollen canal although this destination could change.......Ahh! freedom. Along the Oxford this bridge below is 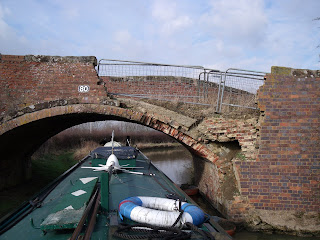 still in need of some TLC having been in this state for the past 3 yrs.
Further along this canal side property had a nice Dove house and it seemed a bit posh with the 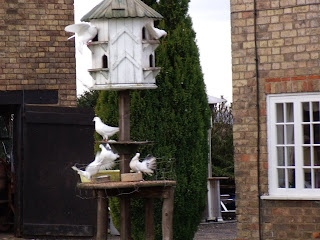 dining area on the 1st floor the lounge above and sleeping quarters at the top. 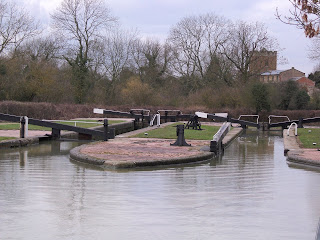 The locks above are at Hillmorton and i am just about to enter. The flight is made up of 3 pairs of singles. Nice and easy to operate single handed with one gate to enter and 2 gates to exit, one can be opened and you can then step across and open t`other. When i exit i stop the boat just by the gates and use my pole to push them shut.
Posted by Les Biggs at Thursday, February 19, 2009

Hi Les
Great to meet up with you again, and glad you got the pump sorted. Take care and happy crusing...

Hi D/A
Nice to see you both again even better this time round as Derwent6 had been born.
Next time I`ll buy the beers.

I will enjoy popping by.