Went out for a stroll and as i approached the site of yesterdays sunken cruiser a BW tug had just finished securing it to the towpath as they passed i learnt they would be back Wednesday to remove it probably using a small floating crane. Hopefully i might be around to see the event but then again i might be off to moorings new such is the life of a boater. 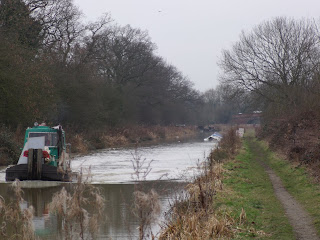 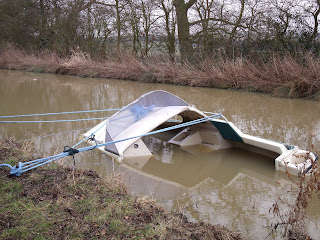 Now you might have noticed a few changes to the front page of the blog in as far that I have added my location under the "Where am i now" heading on the right, also the followers of the blog have increased to 5......Welcome to you. I suppose the followers is like joining a fan club as i know a lot of people read the blog but perhaps they don`t want to join the fan club and that`s fine everyone is welcome.
As i`ve said before no way am i a computer expert and that location gadget believe it or not took me about an hour and half to get on the blog as the instructions were to me in a foreign language with html, paste, rss, face north standing on 1 leg. Anyway the latest add on "My photo album" was a record breaker, time wise. Last night i spent 4hrs untill 2am trying to add it using the photo bucket system and gave up, but this evening within 35 mins using picasa i achieved what to me seemed like conquering the world and that`s why the title of this blog is I AM CHUFFED.
The one and only picture in my album, more will be added soon, was taken on the Leeds & Liverpool canal and is a Memorial to the Polish air crew that died when their bomber crashed nearby in WW2. This single picture was needed to create an album for my link to work.
Posted by Les Biggs at Tuesday, February 17, 2009

Love the GPS thingy...very high tech.
Working in an office all day I come home, grab a cuppa and log on to my boat blogs which always seem to lift my spirirts.
www.dundustins.blogspot.com

Hi Les
I'm sure that a lot more than 5 people follow your blog, just that, like us, they don't do it through the blogger dashboard page.

Hi Dundustin
Yes it`s quite good as maps can be overlayed to give a good picture of whats around.

Hi Pip
Yes of course more than 5 read the blog.....i hope, and whatever way they choose is fine with me. The blog only started so the kids can see what i`m upto but as you are no doubt finding you gather new aquaintances and indeed friends on a regular basis.
Can`t wait to see Windsong on the road