Leaving Shipley 16 swing bridges have to be opened and shut as we pass through them on our way to Bingley and i can`t thank Tina (NB Ytene) enough operating all these and the many others prior to Shipley. I must check but i think this canal ,Leeds&Liverpool, must hold the record for the most swing bridges and staircase locks but for now thanks again Tina. X
Twelve miles of cruising twisting and turning around the hills with views as below brings us to 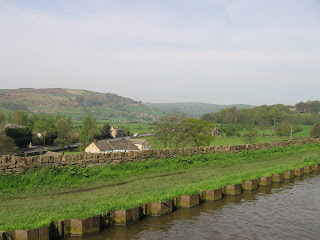 the Bingley 5. The 5 is a flight of staircase locks and the difference between these and an ordinary lock is that the gate ahead of you as you enter is also is part of the next lock, ok i hear people saying WHAT and i was confused before getting on board NB Valerie so if you remember 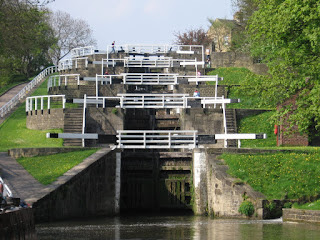 an ordinary lock has 2 gates(enter&exit) now look at the picture above you can see 5 gates plus the entry one at the top out of sight so 6 gates for 5 locks against 10 if the 5 locks were spread out. ( 5x2)
The flight was built in 1770`s and cargoes passing through over the years would consist of West Yorkshire coal for the mills and coal merchants over a vast area also the mills would receive Australian wool via Liverpool docks plus cocoa for the chocolate factories in York plus many other products that were transported on the canal system long before roads and trains became the favoured transport routes.
The locks are under the watchful eye of a lockeeper and i found a little verse you might like.
I`m the lockeeper, at Bingley I tarry,
logging the short boats and cargoes they carry,
minding the bargees don`t waste water much,
maintaining the sluices, lock gates and such.
In grandfather`s time the locks worked night and day,
but nowadays the trade`s mostly people at play.
After leaving Bingley 5 just half a mile and yet another staircase to get lock through this time a flight of 3. Exiting Bingley town we pass through Saltair & Shipley negotiating more swing bridges & staircase flights to make an overnight stop at Rodley before tackling the trip through Leeds, I say tackle as sadly like a lot of other main city`s Leeds has a reputation for the yob element to amuse themselves at some locks as boats pass through. I decided best to lock the doors front and back so while i was off the boat at locks no one was able to access my home. Now don`t get alarmed by this as i can assure you that 99.9% of the time life on the canals is peaceful with not a thought about the rat race world that exists just a short distance away from the waterways but very occasionally you must be aware that some of the human race don`t use the same rule book as the majority of us.
Passing through Leeds went well and the lockeeper let us out at River lock where the Aire & Calder navigation joins the Leeds&Liverpool canal and now it`s river under the boat not canal water. The next lock would be Leeds lock in the city centre and the first of many that are electrically operated by a lockeeper or if no lockie then boaters self operate. As boats approach these locks they are met by traffic lights that can be seen from a distance and the various light sequences tell you what needs to be done.
RED Moor up, the lock is in use.
AMBER No lockeeper so operate lock yourself.
RED&GREEN The lockeeper will prepare the lock for you.
GREEN Enter the lock
Flashing RED River in flood unsafe to proceed ( Boaters nightmare)

Leeds lock was the only place where 3 young lads decided it would be fun to jump on the boat but changed their mind when i reversed the boat away from the side and they soon tired and went on their way.

In the picture below is the control panel boaters use to self operate the locks, some are small locks but further up river they are vast to accommadate large sea going vessels but more of that on the next blog. 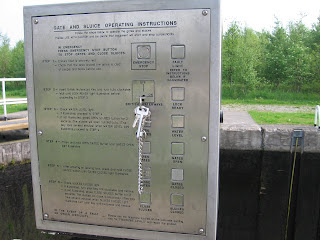 So having passed through Leeds we moored about 5 miles out of the city and took a train £1.90 return to have a look around Leeds. I was amazed at the size of the indoor and out door markets in Leeds and of some of the arcades in the city centre like the one pictured below. They certainly don`t build them like this anymore with the stone columns and iron and glass domed roofs.
While in the city i took the opportunity to replace my mobile phone that had a crushed screen after being in my pocket when pushing open lock gates a while back, it still worked but it was guess work scrolling the menus to call anyone. 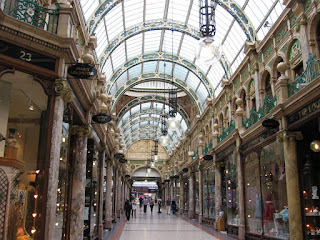 Glad you had no trouble passing through 'my' city.

The 5 Rise Locks and the 3 locks a short distance later on have made it easy for us which way to go when we pick up our rental narrow boat from Skipton in 3 weeks time.....WEST !!!

I am glad you enjoyed your short visit into LEEDS, some of the pre 20th century buildings are impressive.

Hi IAN
good choice the scenery is great and it will save you precious time in your short boating break.
Enjoy

Hi dj
Yes some great buildings, i liked the indoor market hall built to last un-like some of the buildings going up nowadays.