Still on the Bridgewater Canal as we cross the Manchester Ship Canal at Barton Swing Aqueduct. The Aqueduct no longer swings to allow ships through and in fact the mechanism that sealed the 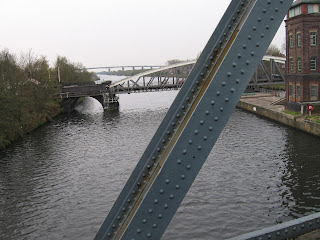 canal at each end of the Aqueduct is no longer in place. The view above as i cruise across shows the road bridge further along the ship canal and in the distance the M60 can be seen spanning the ship canal. 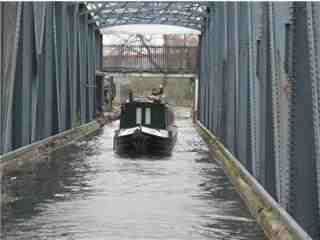 Above courtesy of Tina on NB Ytene a picture of me on NB Valerie coming across the Aqueduct.
Talking of Tina below she poses cup in hand with Andy, yep she sure is gorgeous with lovely wet lips and so smooth when you stroke her, truly a first class Rottweiler is Leah. But if you see the boat around don`t try to board as Leah won`t be so nice. Below is Plank Lane Swing bridge except it lifts rather than swings. The bridge is controlled by British Waterways as about a mile back at the village of Leigh the Bridgewater became the 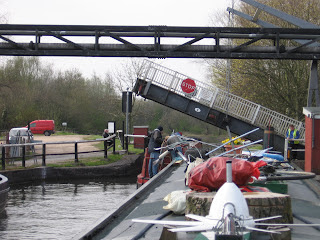 Leeds& Liverpool Canal. Our BW licence allowed us to cruise the Bridgewater for 7 days but how anyone would know if you stayed longer beats me as when we left the Trent&Mersey canal and entered the Bridgewater there wasn`t any border guards.


So on we go and get back to proper boating with a few locks to do at Wigan, well actually 23 within 2 miles. We decided on an early start at the first 2 locks at Poolstock and after coming out of the first promptly run aground owing to a drop in the pound of about 18inches. Walking up to the next lock i found BW letting water down to refill the pound, that`s the section of canal between locks. 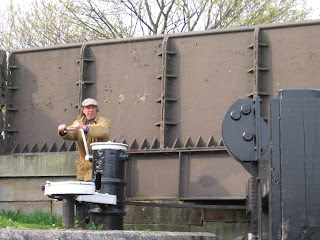 Eventually getting going up the main flight some very strange lock gear was to be found, i say strange because it ain`t like this down south. Above John off NB TUI sedately winds a gate open while below Tina gets to grips with a smile to show how to do it properly. 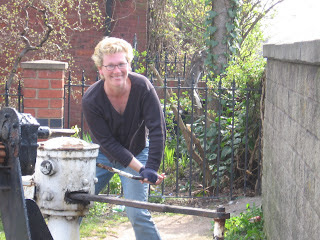 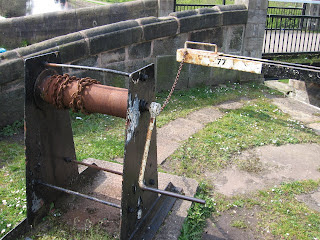 Above a different winder to close the gates and below a counter balance weight attached to the lock beam helps pull it open. 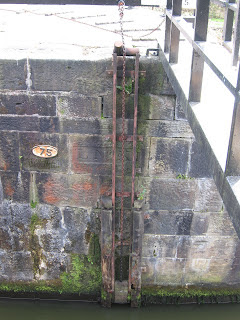 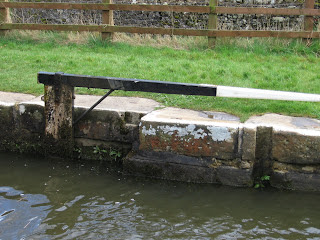 Pictured above is a wooden handled ground paddle that is lifted to allow water into the lock while below a wind up ground paddle. You can see the winding gear on the gates that is operated after the ground paddle has half filled the lock as the gate paddles are high on the gate and operating them to early will send water cascading over the front (bow) of the boat. 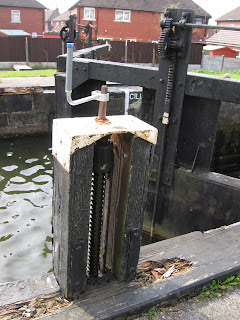 Right that`s enough for now i`m off to the pub and if you`re reading this Bev it`s just for research and the exercise although i might have a lemonade.
Posted by Les Biggs at Monday, May 05, 2008

I don't know where you got the idea that the Barton Swing Aqueduct doesn't swing any more. Whoever told you that is wrong! It swings regularly. There are regular freight vessels through here and even one of the Mersey ferries comes through on regular passenger journeys.

Hi Martin C
I was told it not only didn`t swing but was not able to be sealed. I must admit i didn`t pay as close attention as i came across so i missed the sealing mechanism that must be still there.
All i can say is thankyou for pointing this fact out and i am really glad it still functions as so much canal history is being lost.