Ahhhhhtumn Cruising! It's the Good Life


"O suns and skies and flowers of June, Count all your boasts together, Love loveth best of all the year, October's bright blue weather." ~Helen Hunt Jackson, American poet, writer and activist, 1830-1885

We woke Monday to a brilliant blue sky and sunshine dappling the boat ceiling with the reflections of rippled water. Time to move! After breakfast we set off, heading southward again back towards the Lapworth Flight. I have another Physiotherapy appointment in Warwick, and I have been told I am being referred to an orthopedic surgeon for a consultation on my damaged left knee. I've registered as a permanent patient in Warwick now, so back down we go.
We are leaving Dickens Heath, a lovely, safe spot to stop when coming out of Birmingham (Brum). It is named after farmer Thomas Dyckens who lived in the area in the 1500's. Only eleven miles for the outskirts of Brum and three miles from the large town of Solihull, a Manorial Survery of 1632 indicates Dickens Heath was ten acres of mostly common land, but it once was a part of the ancient Forest of Arden.
A 1901 census shows that five families lived in the hamlet--all engaged in agricultural work to the surrounding farmers with the exception of the blacksmith. The fields had ancient winsome names: Hither Side Eight Acres, Round Leasow, Six Acre Piece, Maypole Piece, Three Cornered Close and Wren's Nest Close. Some of the modern roads still bear these titles. Up until 1997 nothing had changed in the hamlet. A time traveler from the 1500's could have been plucked up and set down on Round Leasow Lane and instantly recognized where he or she was standing.

994 The Council approved a detailed Master Plan. The Master Plan was to be implemented by the consortium of developers which included Berkeley Homes, Bryant Homes, Redrow Homes, Trencherwood Homes and David Wilson Homes. - See more at: http://dickensheathpc.org.uk/about-dickens-heath/#sthash.oxvYJnru.dpuf
In 1989 a concept for a new village was created to accommodate 8000 new homes in the borough. In 1994 the village council approved a master plan submitted by a consortium of five builders and in 1996 the plan was approved following legal agreements to secure the provision of roads, public footpaths, community facilities and open space which included parkland, the village green, canal walkways, and the nearby Dickens Heath Nature Reserve. From the start the Solihull Council established that Dickens Heath should possess the features of a traditional village instead of merely plunking down a vast modern housing estate in the middle of the hamlet, isolated from everything else around it.
As boaters we found Dickens Heath a lovely quiet spot to moor on the upper Stratford-on-Avon canal just after bridge 14 (or before it depending on which way one is traveling), adjacent to the nature reserve. A walk into the village over the modern footbridge brings one to a large set of flats with a cascading water feature. Further on in the village proper there is a Tesco Express, a chemist (drug store), a library, and bus service to the nearby towns of Solihull and Shirley. It served our needs for a five days but it was time to cruise.

1996 The original outline planning application for the new village was approved following the completion of a legal agreement to secure the provision of roads, footpaths, community facilities and open space, including the parkland, the village green, canal walkways and the nature reserve. - See more at: http://dickensheathpc.org.uk/about-dickens-heath/#sthash.oxvYJnru.dpuf 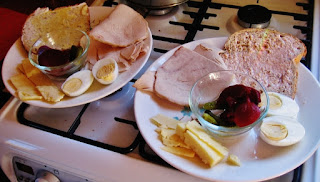 Les let me off the boat at draw bridge 26 and I wound up the bridge while he took it through and moored up under a nearby Oak tree. I wound the bridge down and went inside to fix lunch.
The sun was dipping low in the sky--especially as the clocks over here in the UK moved back an hour last weekend. We stopped at Swallow Cruisers to fill up with diesel, pick up a bottle of Calor propane for the kitchen range, and top up our water and coal.
We had the top four locks of the Lapworth Flight ahead to do and the air was decidedly cooler now that the sun was an hour away from sinking all together. We cruised on. As the sun slowly disappeared the cold began to settle in our bones. Smoke skirled from the chimney, filling our noses with the incense of dried wood. We  went down through the first four locks and I brought the boat into the side of the cutting above the next lock so we could moor up for the night. Small bats flitted around us in the gloaming and our solar powered deck lights on the roof lit up.
What a glorious day for cruising and so typical of this time of year when the canals are mostly empty of boaters except us continuous cruisers and a few pleasure boaters trying out the cut for a short break. Needless to say we both slept well, waking to an oatmeal sky and warmer temperatures. We were once again the only boat on the move and we started down the rest of the Lapworth Flight.
Since we had the locks to ourselves we took our time. Les set the lock ahead, raising the gate paddles to fill the lock and then he opened the gate for me. I cruised in, slowed the boat to a stop with its nose at the bottom gate, and while Les walked down to set the next lock, I closed the top gate behind me and wound down the gate paddles, then walked over and wound up one of the lower gate paddles to let water out and carry the boat down. We worked our way down 8 locks in an hour and three minutes--a very good time.
We stopped for a tea break between locks 14 and 15. A hire boat came up and we knew the rest of the locks were in our favor so we carried on down four more locks where we topped up the water tank and disposed of our rubbish. Then Les locked me through the final two locks into Kingswood Junction Basin. I turned the boat, took it through the eye of the needle as I call the narrow connection between the Grand Union and the Stratford-on-Avon canals. I slowed to pick up Les and cruised past the moored up boats, turned NB Valerie at the Junction and we moored up to stay through Saturday.
We will take the train from Lapworth to Warwick for my next Physio appointment, then walk into the village on Saturday for a Daily Mail weekend newspaper. then we will scarper off to a bit of quiet countryside with a broad, open view where Les can saw logs into rounds and chop wood into lengths and I will stack them on the roof. That's our winter wood settled!

Sounds loverly! Miss you both bunches and love you 1000 Swedish fish!

Again you rouse my passion for the canals and your way of life with your beautiful words....

Hello sweetheart!! It would be even loverlier if you were here to share it. I miss you and love you more than 300.000 Swedish Fish!
Ma xx

Hi Marilyn,
It was grand to have a couple of "normal" days given the chaos of our trip into B'Ham. We are looking forward to more hopefully.
Keep you feathers dry!
Jaqxxx

Oh thank you Nev! I actually had you in mind as I was writing as I know well how much you appreciate a good descriptive passage of prose. We hope you and Rachel are enjoying your share of the good life too!
Jaq xx

Love these descriptions. It's almost like visiting 😊. Joe got another parcel! Thank you. Xx