Lapworth to Birmingham via Stratford on Avon Canal 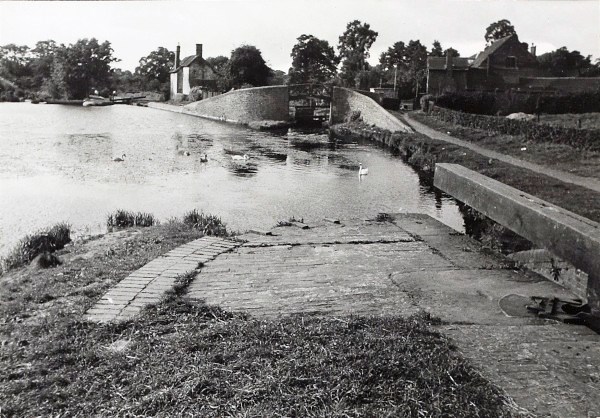 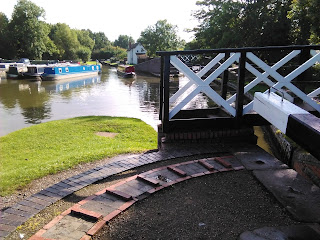 This is Lapworth Junction on the Stratford on Avon canal and the picture above is dated 1954. Trying to reproduce the scene 60 years later is prevented by the addition of a footbridge (left) so the picture below is the best I can do. Perhaps I should have cast the moored boats adrift to create the open water but the official long term moorers might not have approved. Not much has changed apart from the tree growth. Those buildings to the right are still there hidden by the trees. 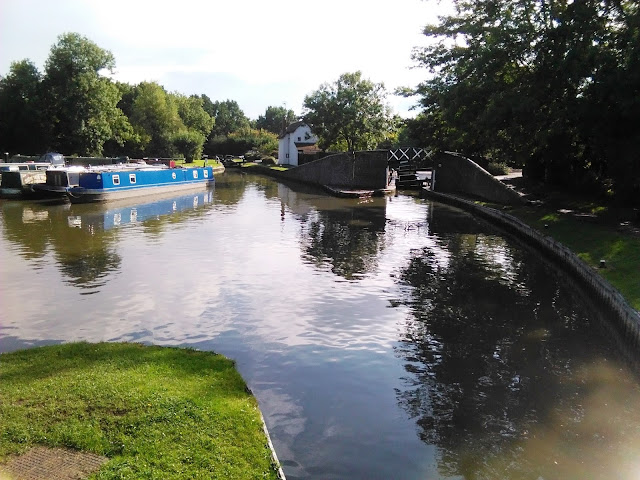 Both the pictures above were taken from lock 19 and the map below shows that both pictures feature the lower reservoir. Using  lock 19 on the Stratford canal we have made our way to Birmingham via Kings Norton and the Worcester and Birmingham canal. Heading south through lock 22 the Stratford canal goes to Stratford upon Avon. The arm leading off from lock 20 is a very short connection to the Grand Union canal. 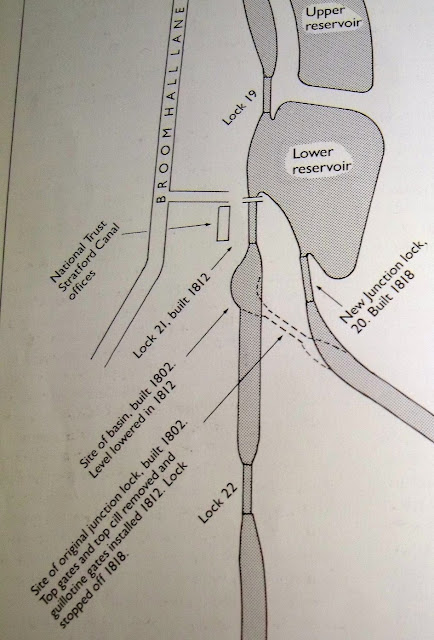 This is the view, albeit two pics pasted together, of the junction seen from the short arm from the Grand junction. On the left the original junction lock leading into the basin and to the right lock 20 heading up the Lapworth Flight towards Birmingham. 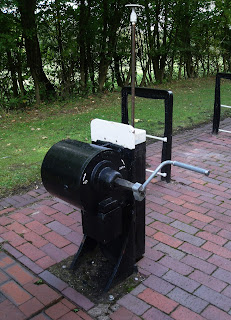 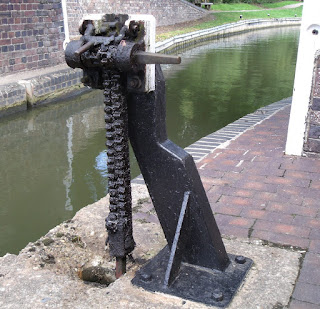 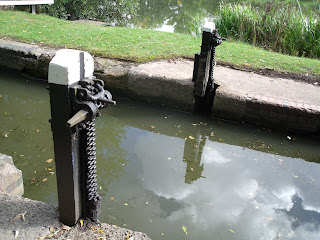 Some of the different lock paddle gear up the Lapworth flight of locks.


Moving on, we have another then and now canal scene at Hockley Heath dating back to 1970. Swallow Cruisers are now located back down the canal at bridge 27. Through the bridge was a coal wharf that was not much longer than a full size working boat. 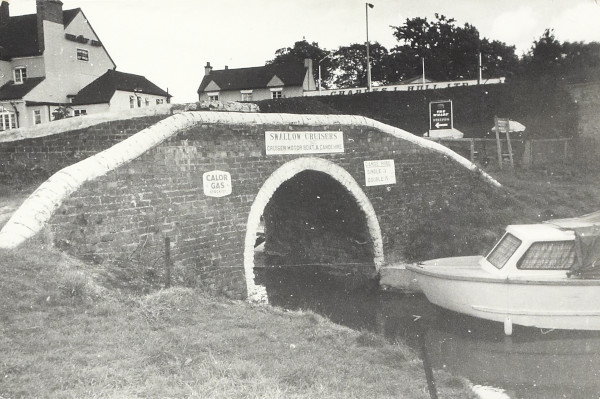 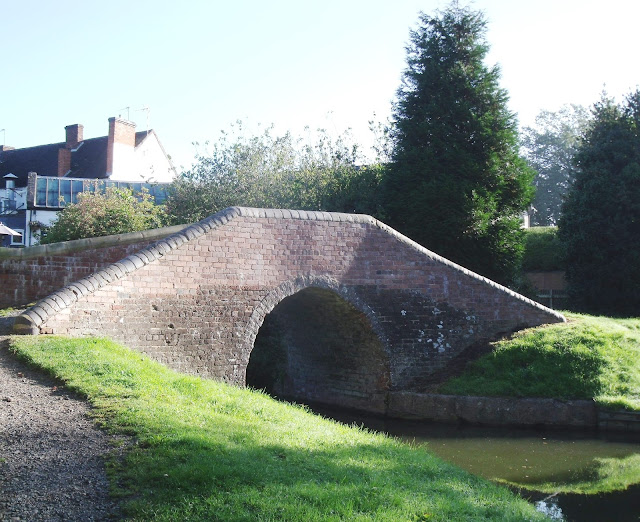 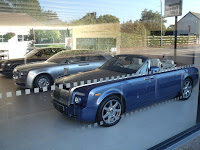 The building to the left is the Wharf Tavern, a glass roofed building blocks the pub, but other than that nothing much has changed. My 15 year old Nicholson's guide mentions a convenient petrol station here; you can just see the garage name: Charles Hill Ltd. Nowadays it's been rebuilt into a Rolls Royce dealership, Rybrooks. They also sell McLaren, passing boaters might prefer the petrol station I think. 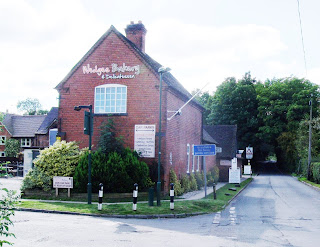 Moving on to bridge 20, it would be a discourtesy to other unaware boaters not to mention Wedges.

It dates back to 1850 when Edwin Dyer started a bakery behind his house. Now it attracts office workers from near and far for their lunchtime meal. Made to order sandwiches--hot or cold including vegetarian--can be eaten in or taken away.  The delicatessen counter is enough to tempt anyone and the fresh fruit and veg dept. is very handy for passing boaters. Just 100yds. from the canal bridge.

Just a few yards further along the Stratford canal moor up and you can visit this attraction that can be seen from space. Okay, it's a Google map picture, so it can be seen from an aircraft, but still it's size makes it stand out from the surrounding countryside.

It's not crop circles but the outside track work for the Birmingham Society for Model Engineers. We were moored just before Hockley Heath some two miles from the BSME and Jaq discovered they were holding a charity open day with steam engines running in several guages on the very extensive tracks, so off I went. 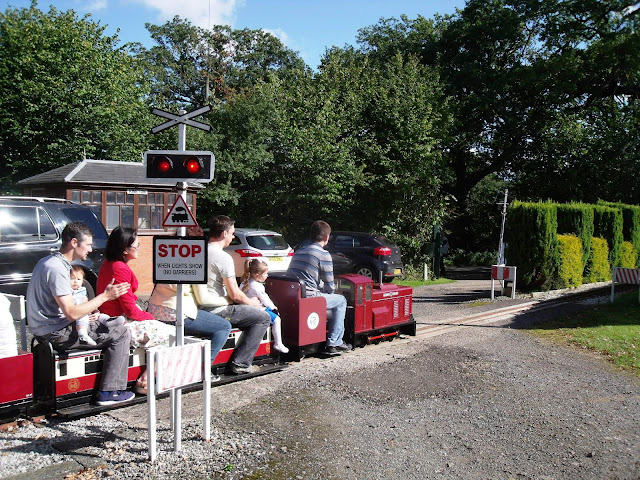 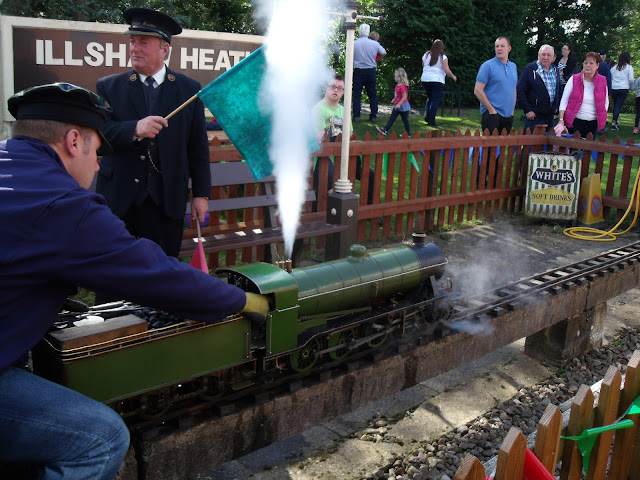 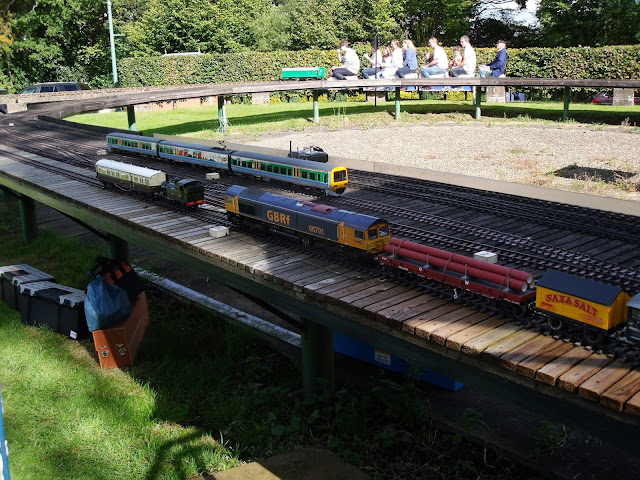 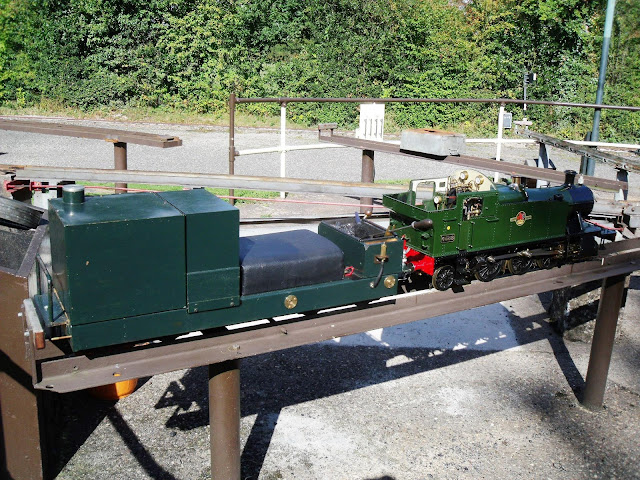 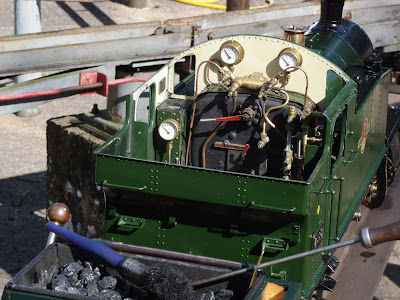 I enjoyed seeing some live steam and it was an interesting few hours raising funds for charity. They have many events through the year, and the next loco running day is 21st October.

Looking back through the calendar Wednesday seems to be a regular loco running day each month so perhaps worth a diary note if cruising this way in the future.

Moving on to Shirley Bridge, no. 8. The picture below dates back to the 1950's. You can see the drawbridge stores next to what was the Boatman's Rest pub. 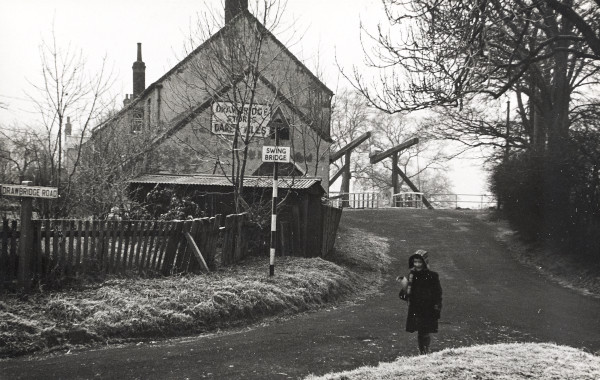 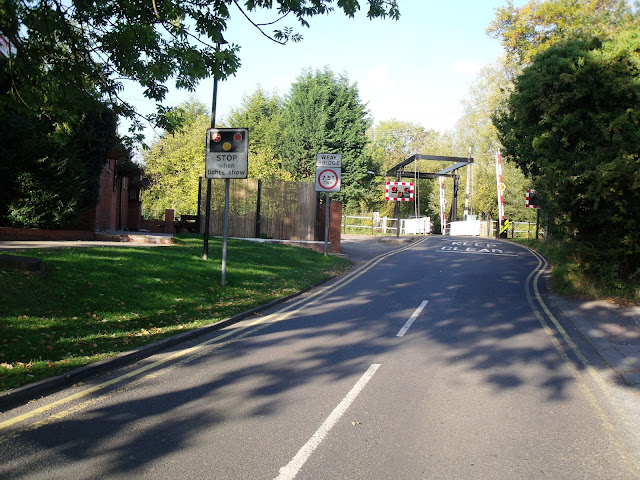 Both buildings are long gone and replaced by a modern pub set back from the road called the Drawbridge. Reviewing the original picture, I guess looking at the road name and traffic sign, there was once a swing bridge probably in the days when there was very little traffic. 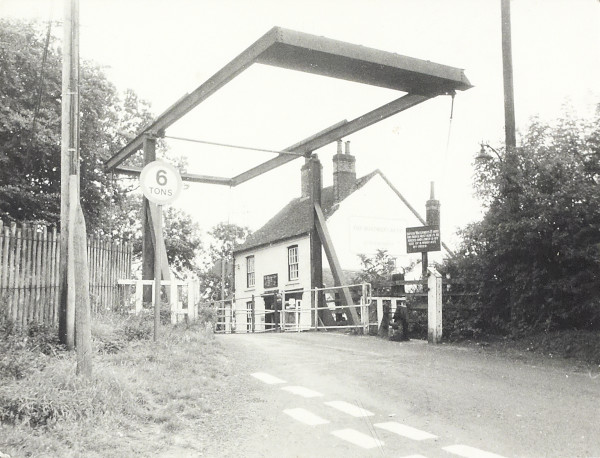 A 1970 view of the Boatman's Rest pub from the other side of the bridge. On the local residents page I found a picture that states the pub was demolished in the late 1960's.

The old photos on this blog post come from CRT archives. Searching can be frustrating and sometimes the captions are not 100% accurate. Search by canal or specific place and tick the box if you just want images.

This is the aqueduct just near to Shirley Bridge and you can see by the graffiti we are leaving the countryside and entering the city limits. 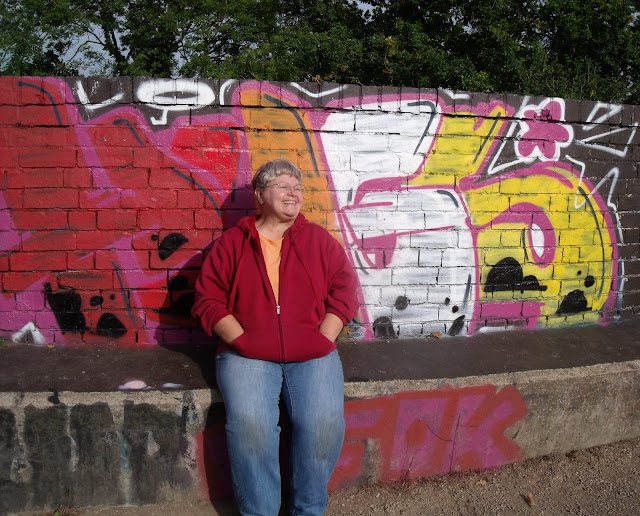 If you want the view below the aqueduct in the 1950`s search the archive for Shirley and select Major's Green aqueduct for three views. 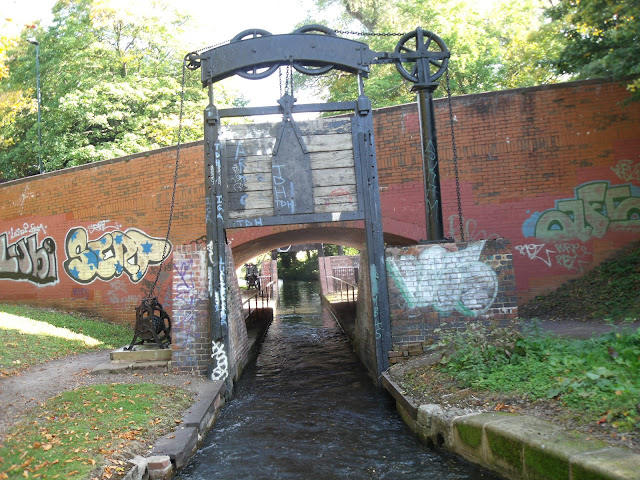 The end of the Stratford canal through the Guillotine lock which is always left raised, and we turn onto the Worcester and Birmingham canal into the centre of Birmingham. 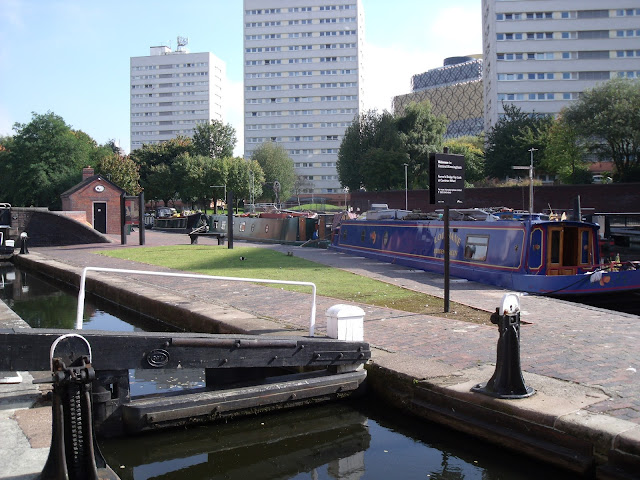 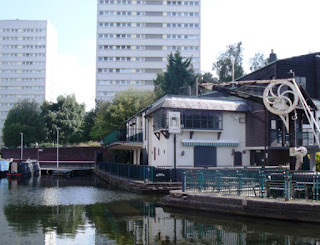 We arrived and decided to try for a mooring in Cambrian Wharf which is fourteen days. The only spot left was next to the Flapper pub (left). We decided to see how things developed over the first noisy night and the next day. As we cruised into the wharf we looked across and saw our friends Scooby and Rita on NB Maple Knot who joined us for a natter. A few minutes later Debbie and James on NB Lois Jane recognized us and came across for hugs and hellos. They have read the blog for years but this is the first time we have met. On our second day in Cambrian Wharf a boat left the moorings just opposite the locks and we were able to move between Maple Knot and Lois Jane. We are still across from the pub but at least the noise is not so bad and there is no chance of anything being dropped from the balcony onto the roof of NB Valerie.

We've enjoyed a brilliant opportunity to spend time with Rita and Scooby whom we haven't seen in three years, with dinner aboard each other's boats. Canadian Rita calls Jaq her North American correspondent and they had a lot of catching up to do. We hope to see them soon further on up the cut. We also had lovely time getting to know James and Debbie who are traders on the cut. James makes beautiful wooden pens and they are gracious hosts, having us aboard for delicious nibbles and great craic. We've missed this very thing: meeting up with fellow boaters as we cruise along, gathering for a few days to chat, eat, laugh, and and have fun, before moving along a bit more. It's been three long years since we felt like we were doing our style of cruising--and we are back to it at last.

After a few days NB Maple Knot and NB Lois Jane moved on, and another famous (infamous?) boat cruised in and moored up behind us: NB Waiouru with Tom and Jan. We've enjoyed afternoon tea aboard each other's boats and walking to the University College Birmingham's (UBC) little bake shop just a ten minute stroll from Cambrian Wharf. Debbie and James told us about this little gem.

Cakes and Bakes sells the treats created by the students in the culinary arts program baking module. The bread is heavenly and a small loaf of seeded brown bread is only 85P. A fresh baked large loaf--still warm from the oven was £1.20 and delicious! They also offer Gruyere Cheese and Onion fougasse (large, flat, round loaves), cream filled Eclairs, sandwiches to go, and pots of soup, so something for everyone! Watch this space for more about the delights of Birmingham.