Don`t visit Birmingham the way I did.

Birmingham is a fantastic city and I highly recommend it not just to boaters but to           everyone but please try to stay out of the city`s hospitals they have nothing the tourist
would want. Jaq has done her posts thanking so many but I do feel the need to back that  up with my heartfelt thanks to all the many who came to help offering both physical
and moral support. Thank you so much.

We have now left the city and found a spot some eight miles out with not a building in    sight   and just darkness and silence,  apart from the Owls,    taking us through to dawn.
Don`t get me wrong but having spent the second of our two week visit in two hospitals we had a yearning for the countryside but we are both sure we will return before winter is over.

Quite a lot to post about including a lot of history but for now just a quick glance around the canal near Gas Street Basin.
Gas Street is marked `C` below and adjacent are the two canal basins. Gas street was the first city street to be lit by Gas hence the name.

In 1773 the Birmingham canal terminated at a wharf near Bridge street. The Worcester and Birmingham canal was started here in 1795. In the days of canals the one thing nobody shared unless a toll had been paid was water. The Birmingham canal built a physical barrier across the two canals preventing any water being lost to the other canal. This of course meant all cargoes had to be transshipped across this 7 feet wide barrier into another boat. The Worcester Bar still exists with boats moored each side but has for the past 200 years been breached by a narrow stop lock permanently open to through traffic. 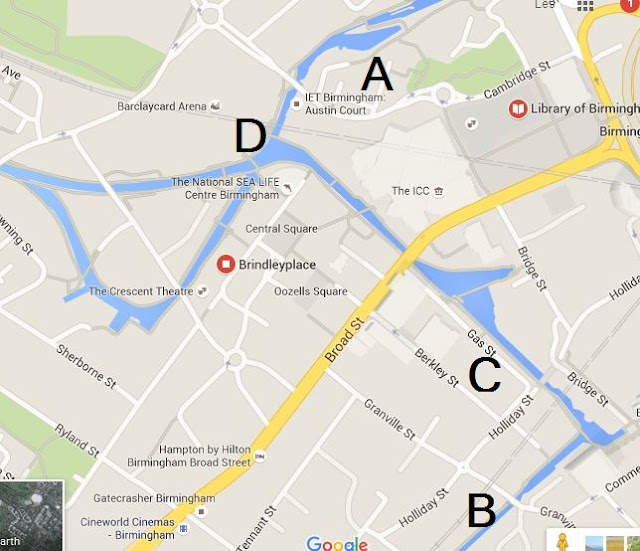 `B` on the map is the Worcester and Birmingham canal our entry point into the city. 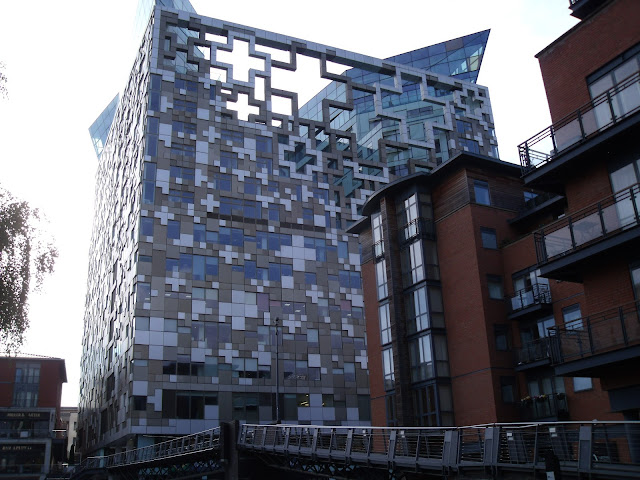 This is the Cube it`s the first thing you see as you enter the city at point `B`. It stands 25 storeys high on the right as you make a sharp left turn towards Gas street. 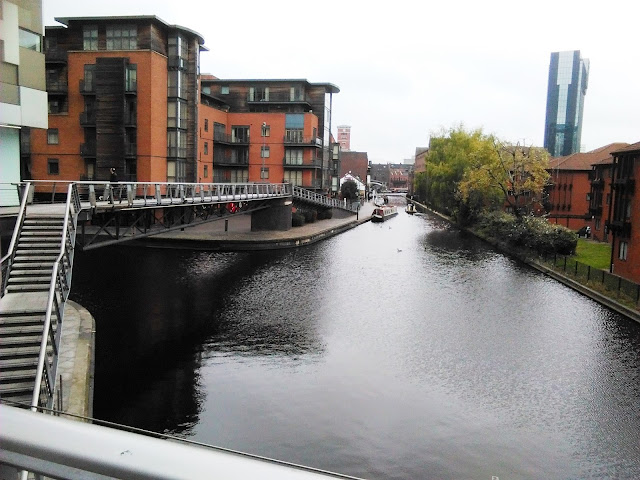 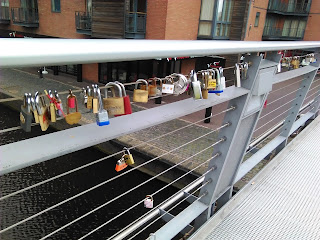 The Cube is to the left and we have cruised in from the left. The view ahead is towards Worcester Bar and the Gas street basins.
The bridge to the left has hundreds of padlocks attached to it. It seems to be a craze sweeping the globe where young lovers mark their name on the lock and throw the key into the water. It has become a big problem in Paris. 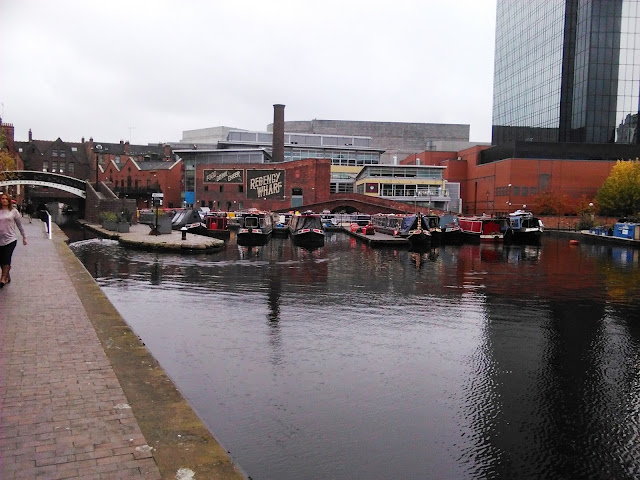 Gas street basins to the right and the stop lock to the left. The next photo is taken from the bridge over the stop lock. 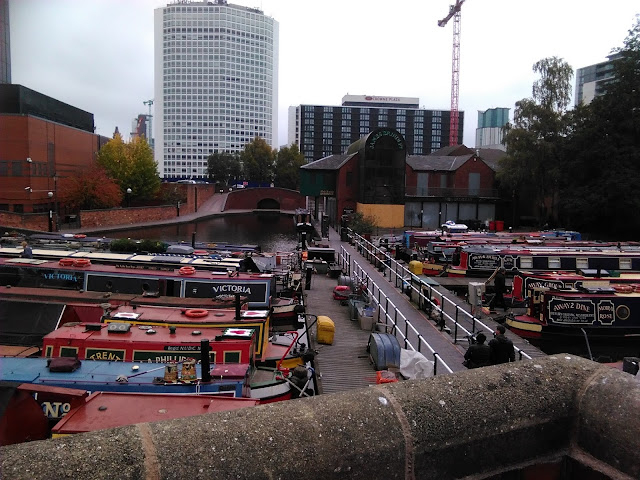 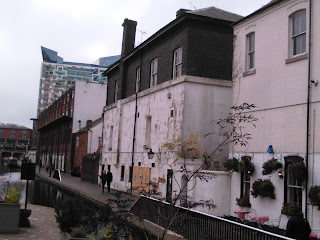 Here you can clearly see the Worcester bar widened by floating jetty's used by boats moored each side. Can you imagine two boats moored one each side adjacent to the bar and the cargoes being moved from one boat to the other.
The building (right) was the Worcester and Birmingham canal`s head office and it overlooked the Bar. Would you not think that over the 20 years this cargo swop took place one of the directors would realise the stupidity of it. 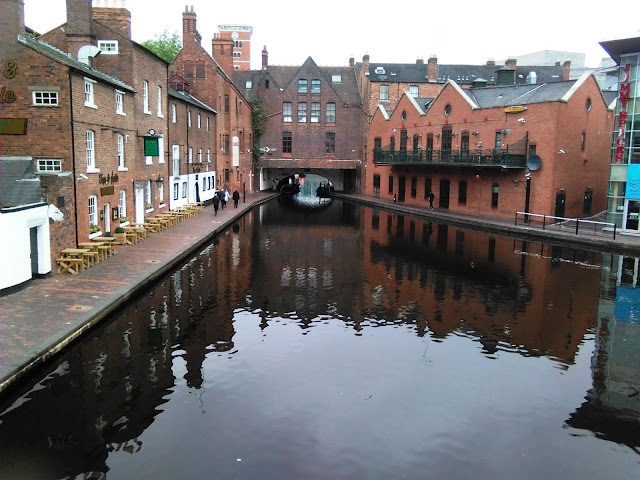 As it entered the city to the right Broad street passed between some very large canal basins but more on that later in another historical post. 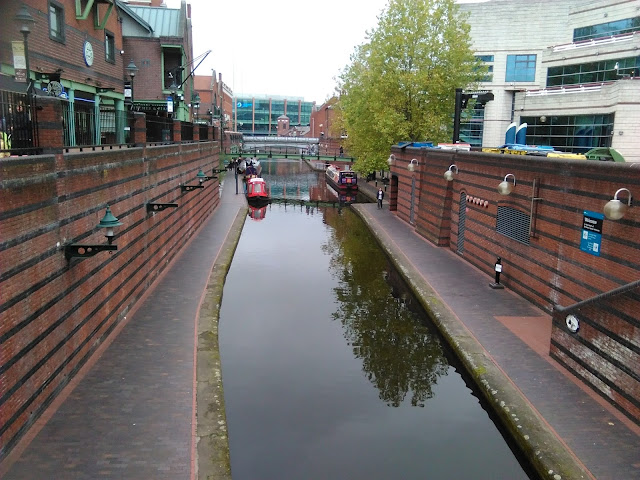 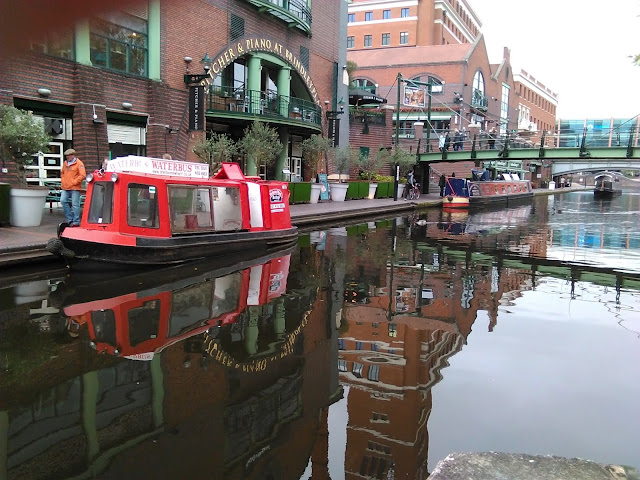 The area to the left is called Waters Edge. It has a high concentration of restaurants and is where Jaq and I celebrated her birthday on Monday.
The small boat moored is the Water Bus and although probably quicker to walk it`s makes a reasonably priced trip for visitors. 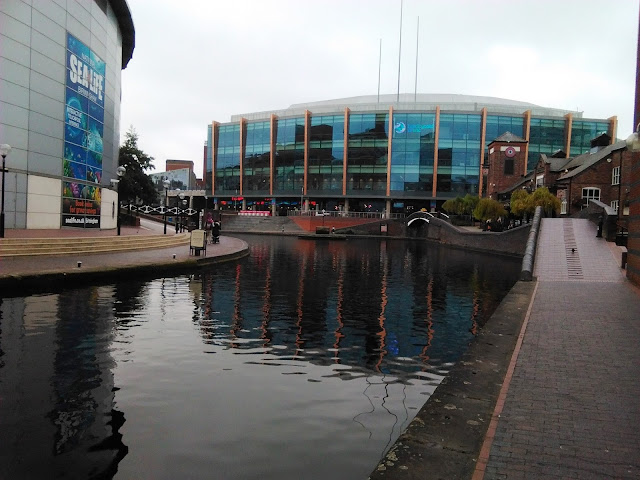 On the left the Sealife centre and straight ahead the Barclaycard Arena home to many events all year round. 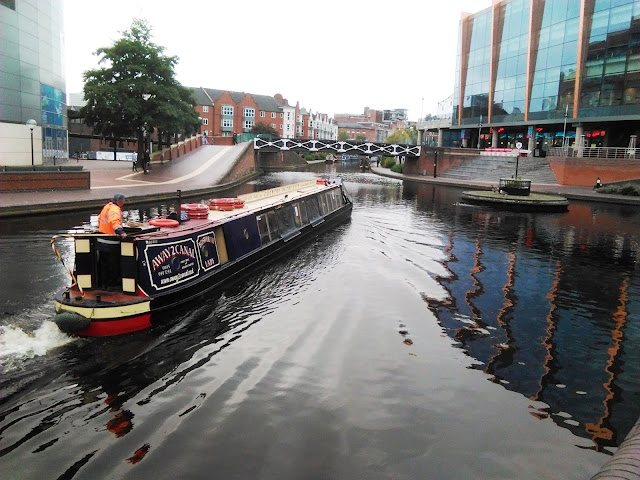 This is looking left from point `D` on the map towards the Birmingham main line. Just beneath the bridge can be seen Oozells Street Loop that passes the rear of Brindley Place. Quiet moorings can be found here away from the heavy foot traffic that is common along this stretch. 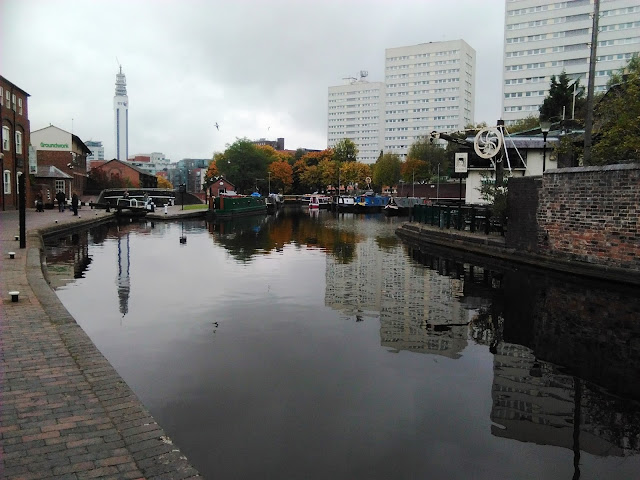 Looking to the right at point `D` of the map we have our mooring at Cambrian Wharf `A`. Nb Valerie is the Green boat on the left next to the lock. Over to the right is a pub and if you are early to bed this is not the mooring for you. Noise is the only problem here until 11pm. the weekend is later (1am) but to be able to stay for 14 days, 48 hrs. most other places nearby,  that`s the price you pay.
The city centre shops are just behind the high rise flats.

Birmingham is well worth a visit with much to see some of it without charge although I don`t recommend a hospital stay.  I must say though the second hospital stay was accompanied by the best hospital care i have ever experienced in the NHS. It`s just a shame the first admission was spoilt by the staff refusing Jaq seeing me out of hours. At least I received apologies from the staff in the second ward who had witnessed the incident but were unable to intervene.
We will be back soon to catch up on what we missed.

So good to read your blog Les. I was getting a wee bit worries as Jaq hadn't posted recently - even on her birthday! Glad your experience improved. xx

Hello Sally
We have just spent the time since getting out of hospital doing nothing. Both of us were shattered but found the energy to go out on Jaq`s birthday the night before we left Brum.
best wishes to Joe.
Les x

Lovely post about Birminghma, Les. It was one of our favourite city moorings and it is nice to revisit through your photos. Glad to hear you're doing a little better. Elly in Oz

Great to hear you are out of hospital again Les. I've enjoyed reading about and looking at the pictures of somewhere I was once well aquatinted with. I used to work in a building (now demolished) that overlooked the basin. Fond memories of lunchtimes spent in the James Brindley!