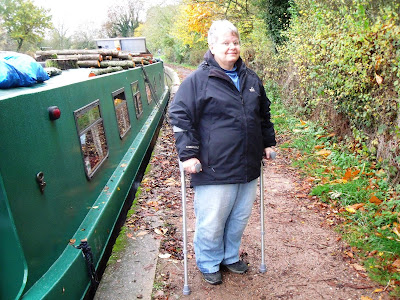 Jaq has just attended her second physiotherapy session. After watching closely as Jaq walked up and down the physio room it was decided she needed crutches to take the pressure off her left knee.
Although having completed the exercises they asked her to do at home walking has become more painful. I have now promoted her to captain at the helm while I do all the lock work. Personally I thought she could cross the locks on the crutches but..........ok ok I`m joking. I spent many years single handing the boat so have no qualms about doing all the locks while Jaq sits and steers.
While Jaq has another appointment next week the better news is they had already referred her to a Orthopedic surgeon and an appointment has come through for the 17th November. 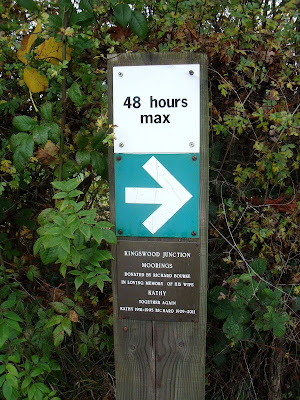 At the moment we are moored with our stern alongside a 48hour visitor mooring. This morning two CRT chaps ambled along did some measuring and erected a winter mooring sign. The section indicated as winter mooring is about 50% of the visitor mooring but there is plenty of 14 day mooring further along so no problem there.
I noticed the winter period this year ends 29th February so seeing as it always was till end of March in previous years CRT obviously know something about the coming winter we don`t. Perhaps I should stop collecting logs.
Anyway sitting here the temptation was to phone and find out how much CRT would require from us to sit here bored out of our brains for 4 months.
£706.80 ($1059). That is remember on top of the year long license we already pay.
Four months of our license equates to £285. Yes I know as Jaq points out hard to compare the two, cruising license and mooring license, Apples and Pears.

In the winter of 2013/14 CRT had a 5 month roving winter permit that worked out at around £88 per month. I know inflation would increase this but surely not double. Plus the beauty of this roving permit was in it`s name. You could pick a different mooring each month if you wished or stay put, if you found a good place, all winter. Link to CRT 2013/14 permit. My thanks to Alan on canal forum for digging this out. 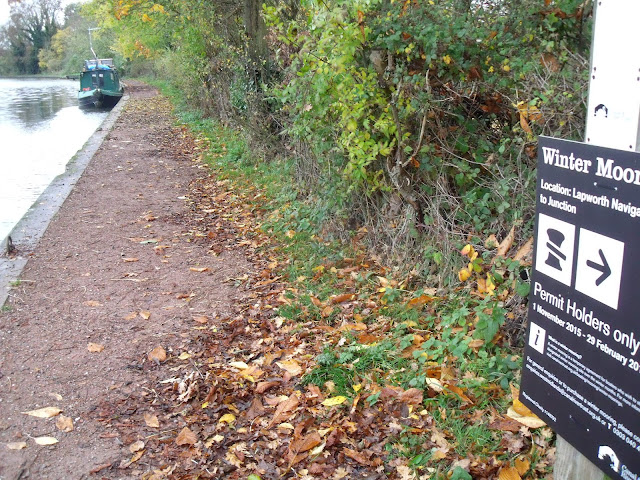 Now just look at the above picture Nb Valerie fully licensed sits there not costing CRT anything and all we have to do is move after the permitted time which happens to be 48hrs here although it might have been 14 days. If I move the boat up past the sign and pay the cash I can stay for four months and still not cost CRT a brass nickel. Just what do they offer for my money; I will not be hounded to move on after 14 days. It will still be cold and we still need to generate electricity and hot water the same as any other mooring. 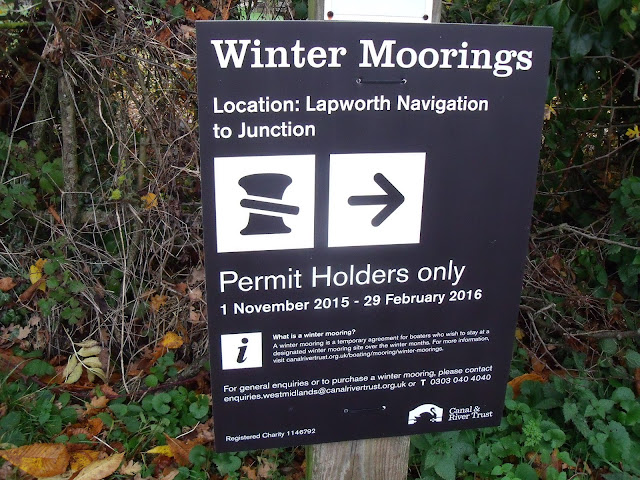 Lapworth village has little to offer the boater over four months of winter neither for that matter has CRT. Remember CRT no longer offer the roving permit so your mooring is in the one place. If you want services you will have to move a very short distance to the junction of the Stratford canal just say half a mile so no problem there unless the canal freezes but walking would be easy to dispose of cassettes and fetch water.

The village has one small shop so perhaps  a Tesco delivery could be arranged although this location is not suitable so a small cruise would be needed. No regular bus service runs through the village and the trains are every two hours.
Anyone mooring up on the towpath now has to think carefully about the location because you can`t move when you want.

Jaq and I love winter almost as good as summer. Fourteen days is plenty for anyone and a few miles movement on a journey keeps CRT happy and besides it`s good exercise.

Best wishes to everyone be they on land or water for the coming winter. Jaq`s prediction is a hard winter as the Oak trees are overburdened with acorns.
My prediction, it will be what it will be so i will spend this weekend cutting all that wood we just found.
Posted by Les Biggs at Friday, October 30, 2015

Oh Jaq ... I hurt just looking at you. Yea I know the boat is great but climbing on and off and in and out has got to be confounding. Yup time for your sweetie to single hand for a while. I presume you are looking at a total knee replacement. Prepare for a full month of significant pain (even with powerful pain killers) if my two experiences are any indication. Got to control the pain to do the exercises. But then bliss. I don't even think about my new knees. But it Does take time so find a cozy spot and tie up.

Rain and colder and darker here. Halloween and home game. That time of year in Pullman

Les,
Those winter charges by C&RT are greater than we pay for our marina mooring with, water mains electricity and sanitary facilities! The bus stop is 150 yards as is the pub and the supermarket 15 minutes.
What on earth is C&RT up to? The plague of continuous moorers is growing every year and here they are making it more and more difficult for the true continuous cruisers!
Rant over
Best wishes to Jaq, both of you take care.
Ken and Sue nb Cleddau

Agh!! Difficult, difficult trying to get round a boat with the irons Jaq! I am sure you will find your way and watch out Les an extended hand could give you a good whack if you put a word out of order!!

We thought we would take a winter mooring for a couple of months this year as one was offered at our favourite winter spot. Cost a fortune yes but it will give some time for Sir's back to recover.... Oh that is as long as I can make my itchy footed hubby stop itching!!

Hi Jaq and Les,
So sorry to see the crutches, Jaq. I hope they are helpful and that the physio and orthopaedic consultation will further improve the situation.

Re. Acorns and winter - I took a walk through Poynton Coppice yesterday and was struck by the number of acorns on the ground. I'm not particularly observant but I did notice a fair carpet of them. The weather currently in north Cheshire is simply glorious, balmy and beautiful, a far cry from winter shivers!

Best wishes to both,
Sue / Boatwif

Yo Jaq! I found lots of good things to do with my crutches when I was younger….I could change the channel on the tv without moving from my chair, I could also shut the door if it got drafty, but most importantly, I had lots of sympathy and people trying to help me………..and I milked it for all it was worth.
Don,t forget to paint the boat name on them in case you fall in! George x x

Hi Sue,
Yep the metals pins do make getting in and out challenging but then so does the very dodgy knee. Thank you for the pointer on extra usage--I hadn't thought of it and I am pleased you shared!;)

I hope you have a good spot for winter to hunker down, and that Vic's back is on the mend soon.
Love Jaq xx

Hi Karen,
It is quite painful and I Know the knee replacement surgery is as well. I am not looking forward to it but needs must. It is a good thing I am a tough old bird.
Love and hugs to you and Jim,
Jaqxxx

Hi George,
Thanks for making me laugh and for the great pointers. Between you and Sue on NP I should have all my bases covered until surgery and recovery.
Miss you and Carol. Hugs to you both a Miss Molly.
Jaqxxx