In Sunshine and in Shadow: Post-op Update

"One cannot enjoy sunshine and light without also accepting and embracing shadows. There cannot be the one without the other--they are equal halves of a whole." ~Anon 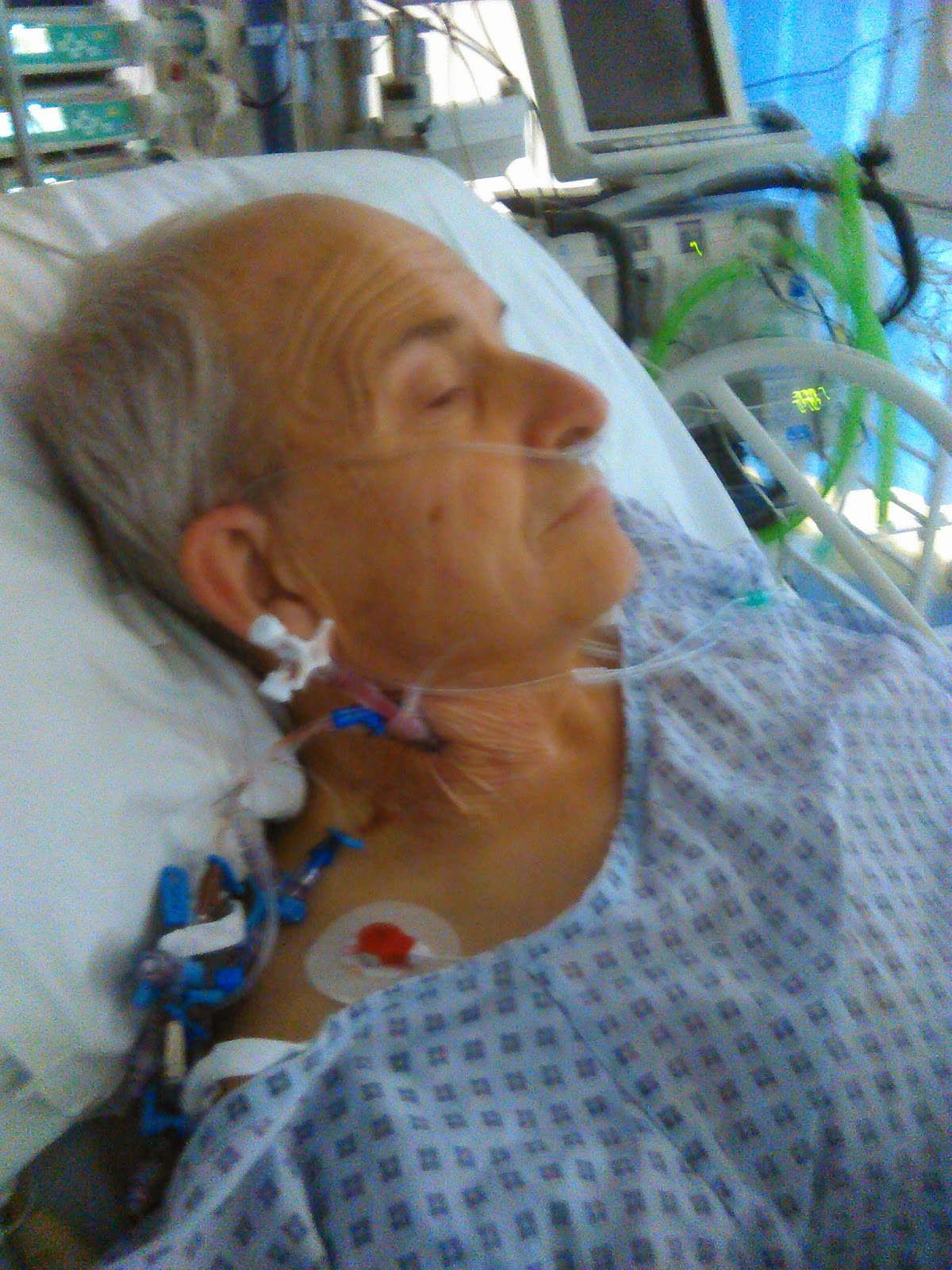 As the hours passed I got to know his brilliant nurse Cynthia, who speaks with excellent English diction and has been an ITU nurse for fifteen years. She was right on top of everything and stayed there, watching and listening intently as Les came 'round and began to use sign language to indicate his pain level was a nine and his mouth was too dry.
Cynthia gave Les some pain medication by IV and squirted drops of water into his mouth. She got his medicine on demand box set up so all he had to do was push a button every five minutes. He struggled to sit up and could not find a comfortable position. Cynthia rearranged him a half dozen times at Les' request, in a gentle, efficient manner. I warned her Les has a very low pain threshold and as he comes 'round he will begin asking a thousand questions--which he did. She told me he thrashed around a lot when he first arrived from the operating theatre.
I knew he was fine when he began to negotiate for release from the oxygen mask. He hated it and it made him very uncomfortable. Cynthia told Les he needed to keep it on for 24 hours. Les bargained for an oxygen cannula in his nose instead and won. As she slipped the plastic cannula hose around his ears to hold it in place, I said, "Darling its a very good thing you've got the ears to support this hose." Les came straight back with, "It's mean to take the piss out of a new surgery patient!"
We laughed and Cynthia relaxed as she watched Les and I banter with one another.
"I can tell you to have fun with each other don't you?"
"Yes, we carry on like this every day, laughing and having a good time together."
Within three hours of coming back from surgery Les was alert, happy and raring to go. He too was over the moon at the surgeon's pronouncement about his surgery outcome. Cynthia took me aside and said, "It's such a pleasure to have a patient who is alert, happy and ready to get well. Most of our patients in ITU are very ill and not very happy." 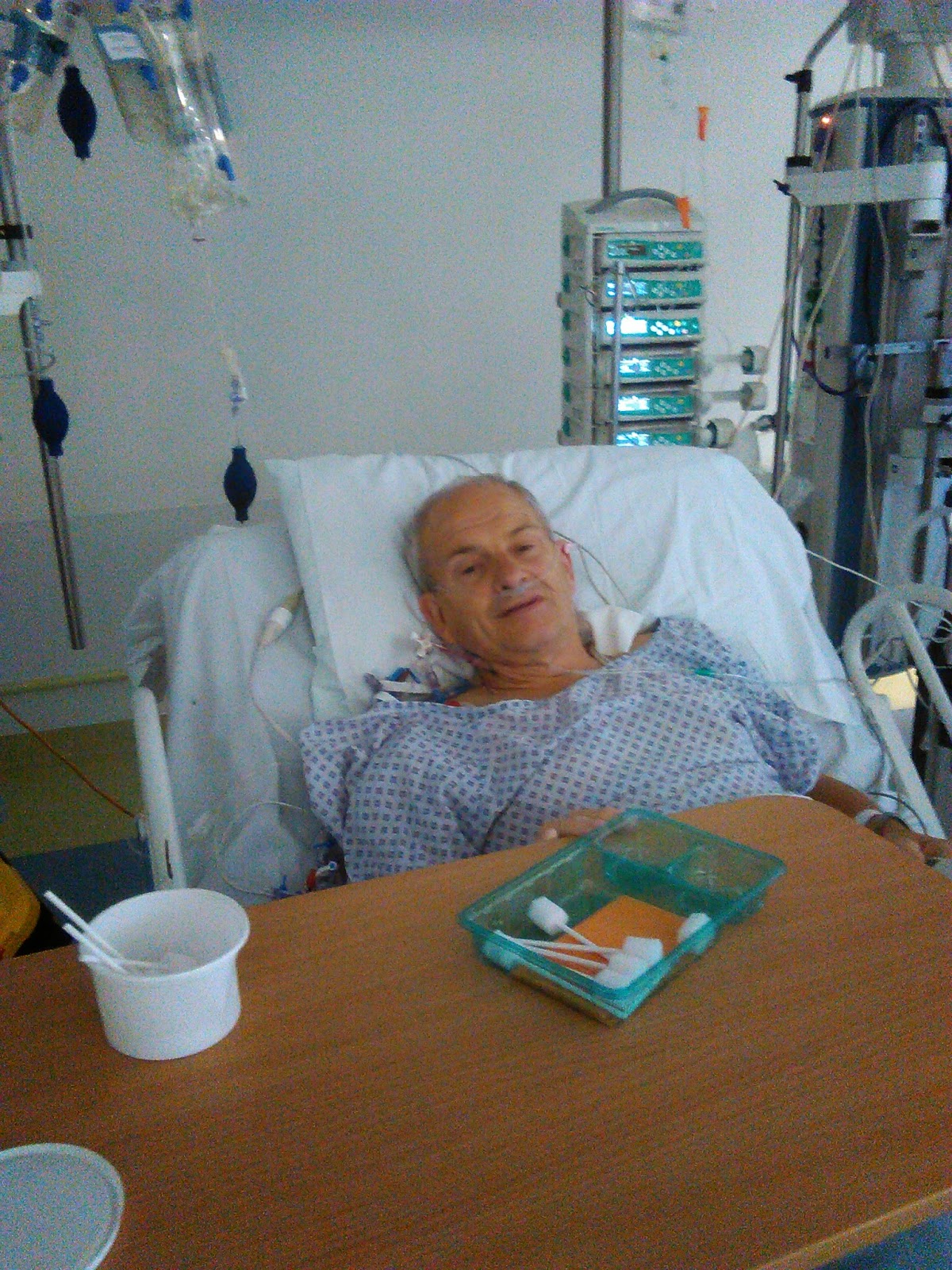 By the time I left at six p.m. Les had eaten a pot of yogurt, drank some water and was attempting to cajole Cynthia into letting him get out of bed!! I told her to be careful or he would have her out in the garden doing Pancake races in a few minutes. Emotionally threadbare and exhausted, I left for home, knowing Dear Sir was in competent, caring, professional hands.
I managed to catch the correct bus to Euston Station, eat a bite of dinner, spot the train I needed, get on the correct train despite the thronging hoard of travelers heading out of London, and I was met at the other end by Robert from WB Wind in the Willows, who took my bags and walked me home though the dark. Thank you Robert!!
I am off to visit Les now and I should not be at all surprised to find him leading Step-dancing classes for the ITU staff!
Posted by Mrs. Jaqueline Biggs at Tuesday, November 04, 2014

looking like the bad stuff is now well over, good news for both of you.
Les, don't rush the healing!

Wonderful news. Tell Les to rest and get better soon - no pancake racing just yet!

I have sat here reading your wonderful post with tears in my eyes.
You have both been through so much this year and lets hope this will be the start of a brand new start and good health.
All my love to you both and gentle hugs for Les. Jo xxxxxxxxxx

Oh Jaquie - you have such a way with words - as someone who works in the NHS I feel ashamed of the way you've been treated :-(

I'm so pleased that it was such an optimistic outcome and that Les is recovering so well.

I'll keep my fingers crossed for a quick recovery from the surgery and an extended winter of peace and no hospitals...

Excellent news, keep, the progress up!.
From the 2 Mikes at Cowroast - both laid up with Bad backs!.

Looking forward to seeing you both back on the summit soon.

Excellent news. Finally you can rest easy in the knowledge that Les is on the mend. We send all our love to you both. Xxxx

I'm sure Les is very motivated to get back to NB Valerie and his warm, peaceful homelife with you. Best wishes to both of you for a return to normalcy.

Oh! This is such good news! We are happy beyond words that things went so well!! Sending love and healing thoughts from Washington.
Always friends, always love,
Bear and Jer

Great News Jaq!!! Hope Les makes a speedy recovery, Best Wishes and Love to you both. Doug and James xx

Great news (and a great post!) So glad that a) things happened and b) that it went so well.

Oh that is such lovely news! So glad the op went well, you both must be relieved! Big hugs all round x

Heavens to Murgatroyd, the offending visitors to his liver have been removed, properly. In the medical business sometimes you win, sometimes you feel like you are losing. The other remark about Cynthia to be cloned, get her full name, and position and other details. A thank you note to her should be sent once Les is back to NB Valerie.

Some notes about surgical socks. TED socks are to me almost like loose thread worn stockings. I wear 30-40mg support hose on both lower legs all the time. It really is the only way to prevent blood clots and similar. May I suggest you both perhaps consider same at some point. Your legs will feel so much better with proper support.

I have no fear of needles;
more likely it is the individual shoving in the needle. Sparky is correct, some have the touch and some don't. Having had years of chemo and other
needles shoved in arms, backs, posterior and elsewhere can well understand the first probe doesn't always hit blood, collapsed veins are my own burden.

BTW the robot confirmation
returned to me only vague words!

Thank you for letting us know how Les is getting on, I am sure a lot of us were holding our breath and crossing our fingers. Hang on in there.
Kath (nb Herbie)

So glad to hear the wonderful news, George and I send all our love and thoughts to you both and wish Les a speedy recovery. xx

So pleased to hear. Sending all my love and best wishes xx

Great news. So pleased for both of you.
Alistair