Ok "Sir" is back, a little lighter in the Liver dept but having to remove only 10% rather than the expected 30% is in itself a bonus. Hopefully now Mr. C has been finally sent on his way but best not to take anything for granted. All we can do is cut out some of the crap food millions of us put in our mouths and hope my immune system can be strengthened to help keep evil at bay. At least I still have one. The chap in the bed opposite had 40% of his liver removed and was put in a comatose state for 9 days in intensive care after his surgery because the chemo had wiped out his immune system. 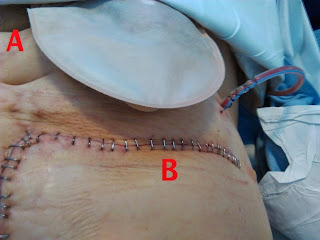 The surgeon tells me the 50 metal clips along the wound have nothing to do with the Stars and Stripes.
Neat, clean and dry it all looked good. The pictures I took about 3 days post surgery when they were taking the drain out. Four days later I awoke to a high temperature and the wound near B red and hot. Just to make clear my belly button is just under the A.
My gripes are; Why did it take 3 days before a different doctor opened the curtain and from the bottom of the bed told me I had a wound infection. Secondly after putting me on anti biotics and opening the wound (8 clips removed) did they send me home the same day. They could at least have let me stay even only for the first dressing change and to check the effect the antibiotics were having.
Anyway the district nurse came by the boat and changed the dressing and repacked the open wound with alginate based on sea weed. I was pleased to observe that very little other than that absorbed by the dressing came out of what is a very deep incision. When the wound was opened to drain at the hospital I would seriously estimate the liquid sludge to be of about a half pint. No wonder it was Red and painful with the body working overtime to get it all out.
Although as I say I would rather  not be here today at least with the drain working and an adjustment here and there with the pain meds Jaq and I can between us muddle on. Jaq has bad knee joint problems and needs to take it easy but of course she is toddling around after me. I do love her for that.
Posted by Les Biggs at Wednesday, November 12, 2014

Les,
Good to read a positive post about your attitude towards the situation. Some parts of the NHS are obviously world class whilst other parts are almost 3rd world or just plain incompetence.
To date it's been quite a trial for both of you but hopefully now the worst is over.
Stay positive!
All the best
Tom & Jan

Whose for a game of 'dot to dot' when the staples out?? Seriously, speedy recovery - to you both. Look after each other.

Good News/Bad News sort of thing heh? Your home ... stay there, hibernate, get your strength back so you can take some of the load off Jaq. One more things out of the way ... on to recovery. Your belly is beginning to look like something surrealistic. Good for you two to show and tell all.
Karen - Pullman

Great to hear you are strong enough to blog again. Been thinking about both of you a lot recently. How long will the staples stay in, and how will they be removed? I hope Jaq's handy with a pair of pliers!

"All we can do is cut out some of the crap food millions of us put in our mouths and hope my immune system can be strengthened to help keep evil at bay. At least I still have one. The chap in the bed opposite had 40% of his liver removed and was put in a comatose state for 9 days in intensive care after his surgery because the chemo had wiped out his immune system."

And Les, I could well be the
chap in a comatose state having surgically lost my lymph nodes plus my left kidney and my spleen and then had three years of chemo. Not fun, especially if the surgeon with the scalpel is about to open me up and cut nearly on the dotted line as he did with you. BTW I took out my own staples last time around, it was sort of fun, and different. Mind, I had to make damn sure I got all of them. Rooting for you here in cold southern Ontario.

Welcome home Les, take it easy, get better .... and Jaq, you take it easy too, accept help when it’s offered from all those kind people around you. The last thing you need is for both of you to be ‘laid up’. We’ll be on our way up the GU soon and hopefully will be able to help too. xx

So glad to hear from you Les. We used to have a family joke about a district nurse, so I'm glad you have a good one! Love to you both,

Aha, Les, I am now naming ODS2 - stands for Old Darned Sock 2. My friend Lesley is ODS version 1, and you can be her acolyte. Explanation: I always used to call her Old Sock, as she called me the short furry one (to do with kiwifruit ...). So when she had her operation last year, she graduated to Old Darned Sock.
You are joining an elite group of my close friends with impressive belly scars and zip openings!
Love and hugs to you both, M&D xox

Good to hear that the infection seems to be halted.

It is a tough road but you have the most incredible woman by your side who will see you through for sure.

So pleased to read your home. Now the recovery begins and Mr C has left the boat. That is on hell of a scar. You and Keith will be able to compare each others ha ha ha.
From now on I think both of you need some TLC.

Look after each other and lots of hugss
Jo & Keith xxxxxx

So glad you are back home again. Get better soon and don't let Jaq overdo it.