Up the Trent and Mersey

The blog needs updating although I think most readers know it is not a live blog so we could be far from the blogged subject. At the moment we have been into Manchester where Jaq treated herself to a Toshiba laptop so she can get work done separate from the captain, ok 2nd in command, I know my place.
Anyway more about Manchester in another blog as at the moment we are moving to a suitable place where I can get a train for a Doctors appointment.
About 18 months ago I had a small lump on my neck and the doc said what it was but I have forgotten. The diagnosis was it would probably stay the same size and cause no problems. What ever it was called it was common. Trouble is the last 3 weeks it has grown so now it will be a referral to the hospital and a little surgery.
Trust me to have one that grows instead of staying small, must be all the good food Jaq cooks me. Still can`t complain as in the 6+ years with this doctor I have been once and now this will be the second. Previous to this when in the house I hadn`t seen a doctor for 5 years so all in all pretty healthy.
﻿ 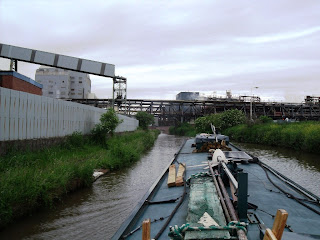 The smelly works that stretches over and along both banks at Northwich. I did ask someone peering over the fence a few years back and from memory I believe they make Phosphate. 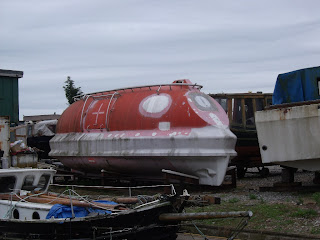 This looks to be a lifeboat from a cruise liner. It had a prop at the rear. It was out of the water at Wincham Wharf where Harral boat brokerage operated until they went bust. I believe the Wharf`s owners are now operating boat sales. 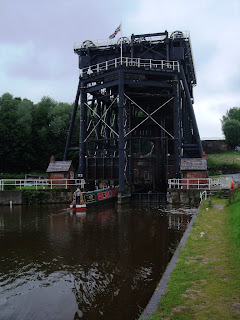 The Anderton boat lift and the journey down to the River Weaver will have to wait. We did stop off and walk down and show Jaq the exhibition. As this is the 10th anniversary of the reopening after restoration entry to the grounds and exhibition is free.  I wonder how much that has cost BW/CART/Boaters. A lot of work on the system could have been implemented with those lost takings.
Ok so just going to hit publish and the thunder and lightning is across the fields and now the rain is pouring down. A wet summer for sure.

If that cruise liner lifeboat is made of steel, not glass fibre, then it could possibly be a survival boat designed for supertankers.....

Hi John
Not sure but I think it might be steel. Looks like it`s been de-rusted and primered.

Have just started to follow your blog and finding it very informative. I love the photo of the Anderton lift, my husband painted a watercolour of this for my birthday last year.
Gill