Bridges over Water, Rock and Cuttings

I mentioned in the last post about the water being plentiful since coming north. Surfing some of my fellow bloggers posts I noticed on Derwent 6 a document from BW `drought impact on navigation` and found a national map here. The map shows that most of the system in pale Blue on the map as preferred cruising routes with no restrictions and adequate water. I know things could change but at least for now we are not having to deal with restrictions and can cruise freely?, continuously?......reminds me to do that piece on continuous cruising. 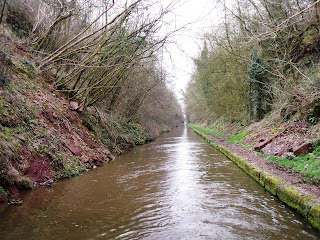 Many times I have cruised the Shropshire Union and it is once again my chosen route, much to Jaq`s delight,  to the Llangollen into north Wales.
The high embankments and deep cuttings(right) are plentiful along it`s very straight sections and make you wonder how many more locks would have been needed had these not been the engineers choice. An alternative choice following land contours would have eliminated some of the cuttings/embankments but the boldness of  the many, many straight sections would have been lost and those high bridges across the cuttings. 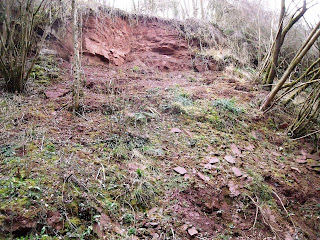 The pictures are of Woodseaves cutting, which is 70` deep in places,  just south of Tyrley locks.Cruising through these cuttings, and for sure don`t moor up for lunch, you have to be aware the steep slopes each side are not the most stable. Back in January 2011 a bad rockfall closed the canal and by the pictures I took a    rockfall, albeit small, had recently occurred. 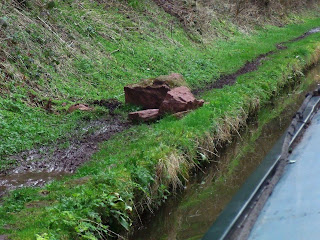 In a past life when I worked my curiosity for knowing where a road led gained me a huge memory bank of the area I earned a living. This curiosity still stands and the many times I`ve cruised the Shroppie canal and passed below the bridges my feet tingle wanting to investigate. Cowley double road bridge(31) and Double culvert bridge(40) are two that seemed to be calling. What could be the meaning of `double road` is it a dual carriageway (U.S. freeway)?,  surely not over a narrow canal bridge. Bridge 40 according to the map book carries a stream and a footpath.  So Jaq stood guard holding the centre line(mooring rope) while quickly went up onto each bridge to satisfy the tingle in my toes. 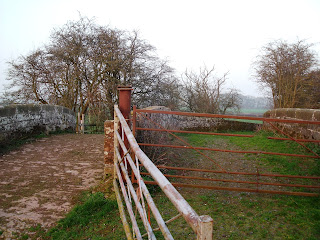 Bridge 31. Not exactly 2 roads with heavy traffic. Perhaps the farmer uses the left for his tractor and the Cows use the right for moving to new pastures. 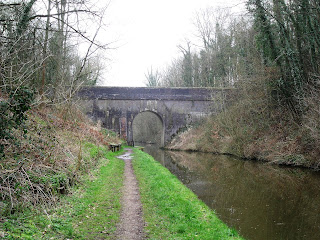 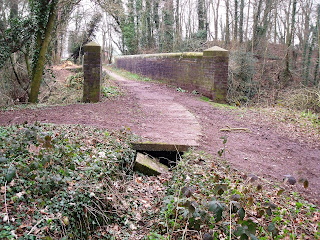 Yes indeed above bridge a footpath and a dried out stream bed. also up here is part of Loynton Moss although better access can be had from bridge 39.
I feel better now although for sure there will be other bridges and hills to climb pathways to walk just to satisfy my curiosity.
Posted by Les Biggs at Monday, March 19, 2012

At least you've got water under you! Got a boat booked for a weeks hire next month .... from Braunston. Going to Kingswood junction and back,lock restrictions shouldn't be a problem, but as it'll be Easter, volume of traffic could be fun. Giving my daughter her 1st taste of cruising.

Hi Ross
Up through Calcutt locks and Warwick. Keep an eye on Waterscape for any restrictions.
Enjoy the trip.