OUT IN the COUNTRY

I am now moored amongst open fields somewhere, and i haven`t even checked the map so who knows, just enjoying the solitude of not being able to see a building of any description. The towpath is so quiet that i have had all the curtains open without being disturbed by countless people walking by staring in. In fact in the last few days only one walker about my age ambled by and as i was having a coffee break  from  fixing the floor trims back we had a long chat and ended up me showing him the inside of NB Valerie.

We all get the phishing scam e mails and as much as possible i try and forward them on to the company`s they purport to be from, ie Lloyds bank, Inland Revenue, Paypal etc although i feel it`s fighting a losing battle. Anyway a new one cropped up recently telling me i`d won a prize after being selected by my e mail address. Wonderful i thought and all they want is half my life or more specifically my bank details.  This one was allegedly from Nestle` and it even had a genuine link to their Web home page so i forwarded it on to Nestle` as usual but what was un-usual was they actually replied thanking me and confirming it was a scam. Nice to be acknowledged.

I must  have to much time on my hands as the other day i e mailed a travel company with a complaint, no i didn`t sign it `disgusted of Tunbridge Wells` Or `disturbed of Towpath moorings`. The thing that peeved me was i needed to get some US $, did i mention i was in love with an American lady.....i did! ok i`ll shut up. I have a cash card that can be loaded with the currency of  your choice and used as a debit card anywhere in your chosen destination. Now what i decided to do was top up on-line from my current account when the dollar hit an acceptable rate. When i checked the rate to top up i noticed that the rate for ordering currency with free delivery was 3cents higher than i would get on my card. Say you changed £500, and most people would change more, the difference would be $15 to my dis-advantage. What i wanted to know was why if both transactions are on-line and my card method required NO secure delivery to a home address was it going to cost me $15. As you can imagine with all these faceless big company`s their e mail answer was just a load of gibberish or to be exact bullshit and didn`t even address my question. Now the solution surprised me as it will you, i visited one of their high st. branches and got a better rate than both on-line methods. So on-line is not always cheapest. 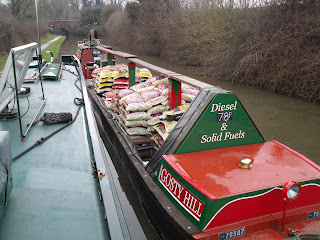 diesel tank and took on some coal. I say topped up as when i returned from the Christmas break and found the ice age had passed i cruised to Rose boats at Brinklow and filled up at the astonishing rate of 86p domestic and so the Gosty rate of 78p was very welcome. Gosty only sells at the lower domestic rate so no declaration worries. Boaters declaration is to me a personal thing so i won`t go into it  in public. 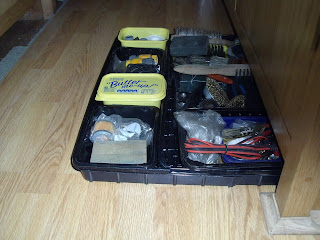 The floor is all but done with just a small area stern end in front of the washing machine to do plus a few of the trims to be put in place. Boys & their toys meant a new place to store my junk bits and bobs and as the space below the galley units was less than generous i hit on the idea of some seed trays from the garden centre and a 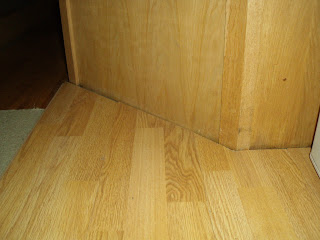 few old butter pots and food trays provided storage. The colour of the floor in the top picture is not correct, maybe the camera flash caused the lighter colour,  as the lower picture is an accurate likeness. his was the bit going around the angle of the bathroom and the trims have since been fixed back in place. I did manage to slice a fair chunk off the top of my thumb during this DIY project but don`t start e mailing in everything is fine now and not one drop of Blood touched the floor so no need to worry.

Thu Jan 27, 01:59:00 AM
Brian and Diana on NB Harnser http://nbharnser.blogspot.com said...
Nice to sort of meet you as we passed a couple of days ago. Quite a gathering of blogers, one moored, one going south and 3 going north all passing in the same spot at the same time.
Have a good time in the States when you finally get away.
Brian

We've really been enjoying your story on Jaqueline's blog and now yours too!

Have a lovely time in the USA!