Being frozen in around the Rugby area for so long gave me the chance to walk the Brownsover Arm which was the original route of the canal until it was re-routed in the 1830`s. The original route built in the late 1700`s was a contour canal and as such it`s route twisted and turned in all directions as it sought to avoid the hills and valleys which would avoid costly embankments, tunnels and aquaducts. Altogether about 20 miles was cut from the route to speed freight in what was a very competitive period between the canal company`s but sadly with the coming of the railways and the increasing road traffic canal freight started it`s slow decline.
. 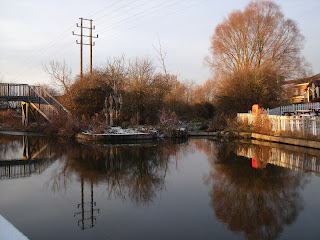 Above the present straightened route is to the left under the footbridge and the old route is almost centre picture.
Below is the first bridge not of modern construction as you walk up the old route and from what i`ve read and maps viewed i believe it to be the old Rugby to Lutterworth Turnpike road that went past Brownsover Hall until in 1836 it was moved to make way for extensive gardens to be added to the front of  the hall. The moving of the road also saw the tollgate near the Hall`s entrance moved and the Star Inn, now a private house, could have been used to collect tolls. 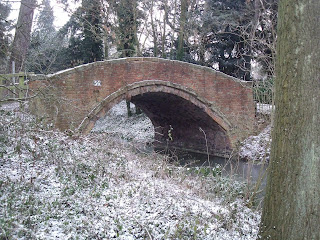 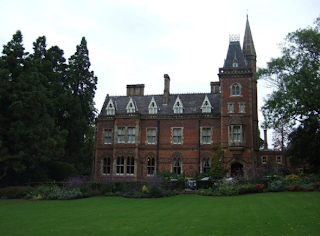 Brownsover Hall (above) is a Victorian Gothic Grade ll listed having been built on the foundations 14c farmhouse. Nowadays it`s a Hotel & Conference Centre but back in 1939 Frank Whittle worked on his jet engine designs in the hall.﻿ 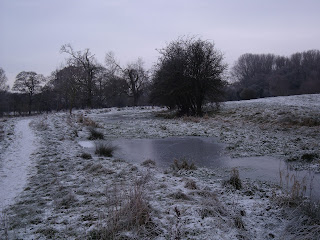 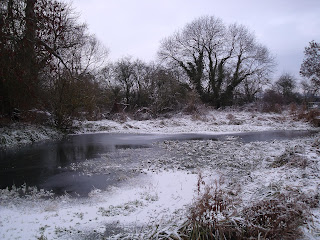 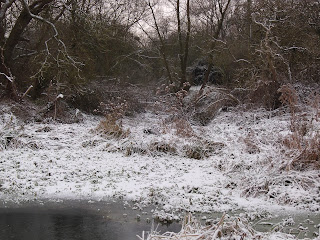 channel that according to maps viewed in the library is a canal feeder now crossed by the M6 but as i got closer the canal made a left turn (picture above)and although now just a dry bed the route is clear. A footpath i assume to be the old towpath to the right of the trees took me over a well overgrown, almost hidden from the path, twin 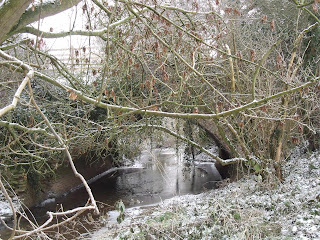 arched bridge. One of which (above) allowed the River Swift to flow while the other pictured below was dry bar a sizable bird/wildlife drinking hole. The problem i now face as i write this, and my memory has failed here, is as i walked along the path over the arches left to right, the canal bed was to my left but which came first wet or dry arch. If it was the river did the canal join  it and if so what was the dry arch for.If the reverse then the canal was avoiding the river which makes a bit of sense as the canal builders wanted as easier route as possible. The trouble is there was no sign as to the continuing canal route possibly because of infill by farmers. 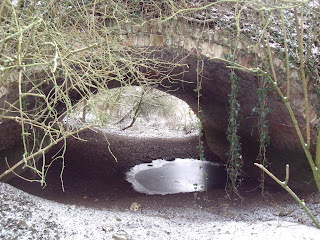 I did during my ice age imprisonment visit the Rugby library before taking this walk but even their oldest Ordnance survey maps gave little clues. One thing that was clearly apparent was that large sections of dis-used canal were shown with the obvious,  at least to me,  route taken leading the canal back to cross what is now 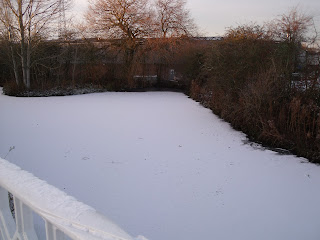 the new route and winding hole by the Willow Wren hire base arm. Now as you look across from the bridge above beyond the winding hole the ground is level with the canal and this route makes sense as to the right is the Swift Valley full of factory units very much below the new canal route and looking along the towpath the two 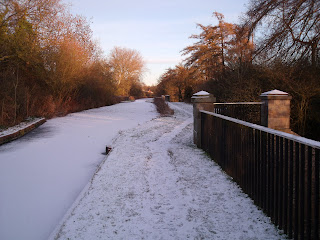 Aqueducts and the high embankment take the canal high above the R. Swift and the old Leicester road plus the retail park containing Wickes and Homebase among others. In the picture below is the arm leading to the Willow Wren base and again i`ve seen old maps clearly showing the canal taking this route across an old railway line 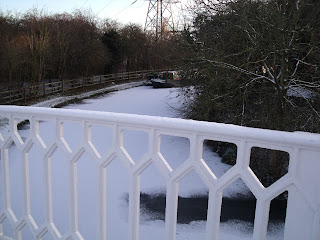 turning back on its self towards Newbold. Walking the towpath to Newbold i can only guess looking at the land contours that it came in on the first bend before the Quarry and at Newbold for sure it turned left  before the tunnel and went past the front doors of the Barley Mow & Boat pubs. See blog 20/8/2007 here.http://boatlife.blogspot.com/2007/08/still-oxford.html
So a little bit more research needed with a visit to the Warwickshire County archives when i get time to source some very old maps and once again seek out the origins of the old Nth Oxford canal route.
The history of the canals has become quite an attraction to me since living aboard and i`m not content to just pass a bridge marked on the map as the old route, i need to trace it.
All the above is what i`ve surmised or researched but anyone is most welcome to have a different opinion but it would be nice if you could refer me to any further reading instead of just disagreeing with me. At 62 i`m still hungry for knowledge.
Posted by Les Biggs at Wednesday, January 12, 2011