Well i have just enjoyed a meal of Lamb steaks, new pots & peas and like all of us addicted to Nicotine i rolled a fag and just sat listening, not much to hear which made it all the better because the only noise was the fan in the Laptop and the birds.....sheer bliss.
Left Wrenbury early afternoon and just cruised along just above tickover, i think a toddler could have kept up with me crawling but as i`ve the rest of my life why rush the sun was shining and i was free. With hardly any boats moving it was sheer joy with an occasional stop to make a cuppa.
Five locks and a couple of bridges to negotiate i arrived at the 3 locks that lead up to the staircase flight at Grindley Brook. 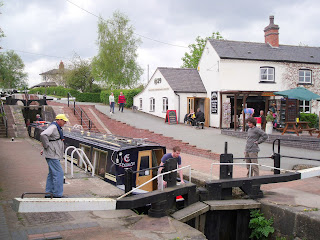 After climbing up through the staircase flight above with the lockeepers help i stopped at the service point and dumped the rubbish and emptied the loo cassette then moored up for the night. 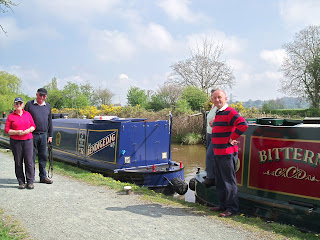 The following day along came Eric & Elsie on NB Bendigedig after their winter stay in Llangollen and as i haven`t seen them for quite some time i put the kettle on and we had a good chinwag. After an hour just as they were going along came Ray & Joyce on Bittern who i last met in Skipton on the Leeds & Liverpool about a year ago so on went the kettle again.
Above they pose by their boats although Joyce seems to have hidden behind Ray.

Sitting at the dinette later in the evening after i closed the cafe i was a bit concerned about the boat in front, well not so much the boat but his BBQ sitting on the rear seat of his boat. I think i would have used the towpath just in case. 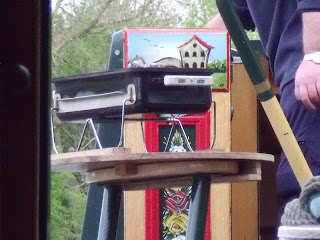