Over the last 3 yrs of cruising although i have by no means visited all the canals i have come to have a few favourite stretches but not a complete canal that is until my return to the Shropshire Union or the Shroppie as it is affectionately known to boaters. Sixty six miles and 47 locks make up the Shroppie

This return visit at a much slower pace has brought home to me what is so different to other canals. For one thing it must be one of the straightest with very few corners or bridge holes that restrict spotting oncoming boats and the way it was built to plough through whatever got in the way unlike other canals that followed the contours of the land the Shroppie goes through deep cuttings, across man made embankments and tunnels through solid rock.

Telford (1757-1834) was not just a builder of canals but also churches, bridges and roads like the London to Holyhead (A5). His intention with the Shroppie was to link the Birmingham canals with the sea at Ellesmere Port on as straight as possible time saving route by digging cuttings and using the soil to create embankments across lower ground avoiding previous canals that twisted and turned following the land contours that added miles and time to the journey.
Embankments like Shelmore that took 6 yrs to build and all because Lord Anson would not allow the canal to pass through Norbury park on lower ground causing Telford to skirt around Shelmore Wood on an embankment 1900yds long and 60` high in places.
Woodseaves Cutting 100` deep is today still likely to suffer land slips.

The Shroppie was the last canal that Telford built and fully opened in about 1835 upon the completion of the Autherly Jct. to Nantwich section that connected to the section to Chester.
The new town of Telford was named after him and he was buried in Westminster Abbey in 1834 just before the Shroppie fully opened. 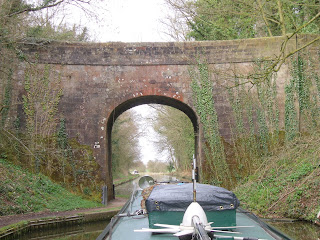 One of many high bridges that span the deep cuttings. 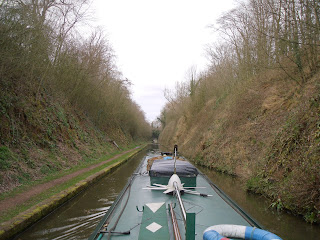 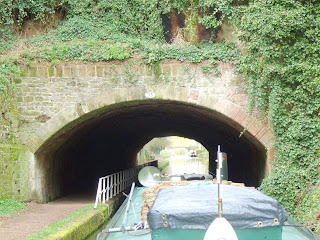 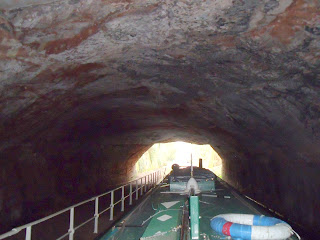 been cut through solid rock, no brick linings as you would see in other tunnels and the picture below shows the exit and looking at the solid rock each side i`m wondering if this tunnel was longer at some time, mental note to check, unless someone out there can answer. 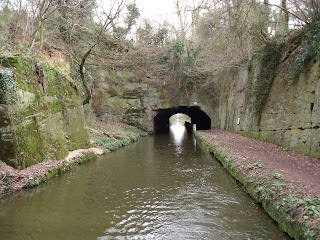 After Cowley Tunnel i made a brief stop at Gnosall below to get some bread and milk and have
some lunch. 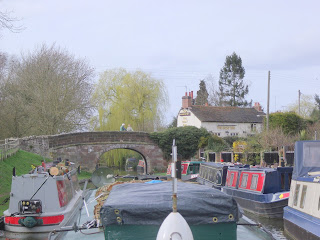 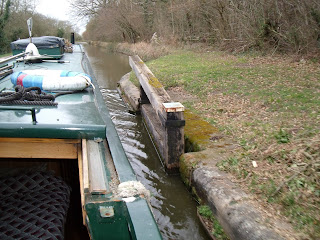 gates at each end can be closed stopping a large section of the canal draining.
The end of the embankment brings me into Norbury Jct. where the Newport branch left the mainline. At the right front of picture NB Valerie and the arm can be seen behind but is very short and used for moorings and just one of a very long flight of locks remains in use as a dock.
When i arrived here i was moored 500yds back with poor Internet access but i learned that in the basin Wi-Fi can be picked up free courtesy of the boat yard so i moved for my second night. 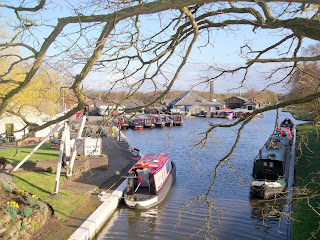 No sooner had i left Norbury than i entered another cutting this one being Grub St cutting and below another of those high bridges unusual in that from the past it still has within it a short telegraph pole. In the past telegraph poles ran the length of the canal. 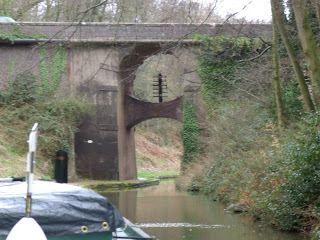 Hi Les - not sure if you have passed us yet or not:-)The answer to your question about Cowley tunnel is here

Hope you enjoy Wales, hope to see you sometime later in the year. As you see from our blog we are past Hurleston!
John and Fiona

Hello John/Fiona
Thanks for that info, i had a feeling it was longer.
No i haven`t passed you as i am taking things slowly as i don`t want to be on the Llangollen during half term.