TO NEWARK ON TRENT

Having left Keadby our overnight stop on this 40 plus miles of the tidal R. Trent was Torksey some 26 miles away. The idea of stopping at Torksey is to make use of the tides and our leaving time the following day was a more respectable 10.30am unlike Keadby, cor it felt like the middle of the night, all this info is available from the very knowledgeable lockeepers.
On the trip down the tidal part are hazards that boaters should be aware of these take the form of islands some underwater but not to worry all are well signed and also marked in the Nicholson guides.
Cromwell Lock stands next to the largest weir on the Trent and marks the end of the tidal section but still you are going against the natural flow of the river as it makes its way to the Humber and the North sea. As this second day was only 15 miles to Cromwell we pushed on to Newark for a few days rest. 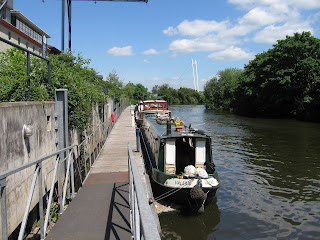 Managed to get on the pontoon moorings outside the BW offices at Newark. The pontoons had water, electric hook up and lighting, so over the few days there I gave the engine a rest and let the shore power take over using the immersion heater for hot water. My only criticism was no rubbish disposal still just a small niggle and you can just make out 2 carrier bags on the bow so I`m hardly buried in rubbish. 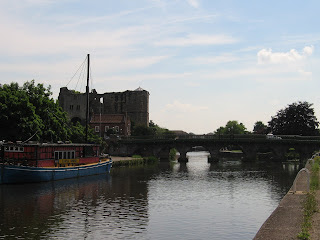 This is the view from `Valerie`, the pub boat on the left was busy at night but far enough away not to be a bother. Left over the bridge brings you into Newark town centre, the 7 arched stone bridge is listed as an ancient monument. 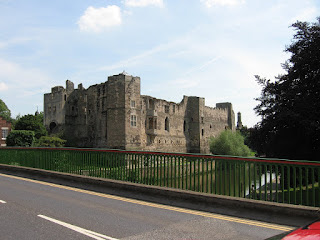 Newark Castle or what`s left of it. What you see is what you get just the river and side walls nothing of the internal structure remains. 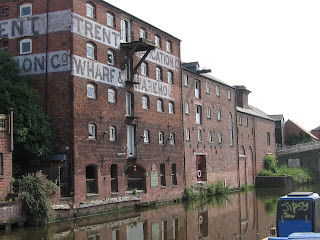 An 18thC Trent navigation Co. wharf & warehouse building now a wine bar/bistro the part to the right is now a museum. The museum is very interesting and covers all sorts but one interesting thing i read was that in 1903 4 people in Newark owned cars and i wondered what the figure is 105 yrs on. 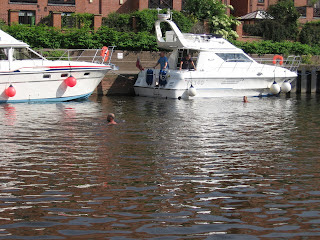 It sure was hot the few days we moored at Newark and the people swimming were off the moored cruisers opposite me. 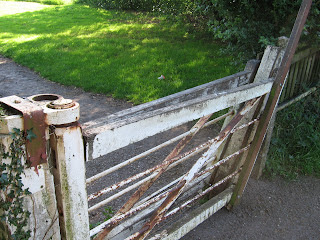 This is a clapper gate many examples of which can be found along the R. Trent. They were installed so that a horse pulling a barge could pass through the gate but livestock could not wander from the field. It`s a double gate opened by pulling towards you and so as you entered from where i`m standing you push open the second gate, both gates would swing shut like clapping your hands the horse carries on and the livestock are in the fields the farmers put them. 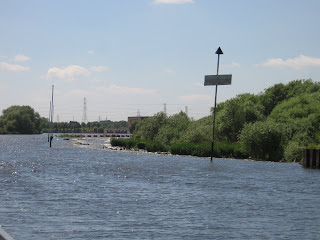 This is Averham weir 2 miles south of Newark and it was here that John on NB TUI following behind us had a major engine failure. He had just passed the weir when his engine seized and following a phone call from him both Tina/Andy on `Ytene` and myself quickly turned around to assist him. The worry was with the river flowing towards us he would go over the weir but all was well and i tied his boat alongside mine and towed him to a marina where the bad news was a replacement engine was his best option.
Had an e mail in response to the printing blog from Eric who together with Patsy are touring in an RV in the mountainous regions near San Francisco USA. Eric tells me he was an apprentice compositor for a short time many years ago here in the UK. So a big hello to you both and hope to see you if poss when you return. In fact it would be nice to meet any reader so if you think i`m heading your way you only have to say.
Posted by Les Biggs at Saturday, June 21, 2008