Having been in York from Mon-Fri we left and spent the night on the moorings at Naburn lock to await our booked passage onto the tidal Ouse back to Selby. Below Tina has taken a picture from her position at the front of the lock where 3 narrowboats are abreast of each other and as you 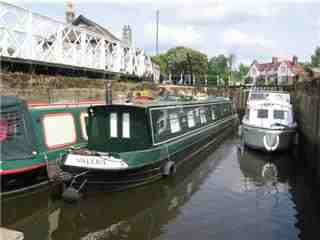 can see i am with another plus a cruiser. You may remember I mentioned before the lock at Selby only takes 2 narrowboats at a time so there will be a queue when we all arrive.
Several cruisers were due to leave after we all left Naburn but they are capable of cutting through the tide more efficiently than a narrowboat so will overtake us on the 2/3 hour journey and clear Selby lock ahead of us.
On the way a sharp eye is needed to avoid floating debris like the large tree trunk below and also 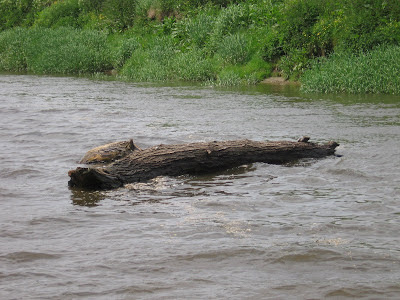 to be aware of the cruisers catching up and wanting to pass. Also being a w`end a large number of cruisers were out heading for Naburn lock that seems to be a regular gathering point as the 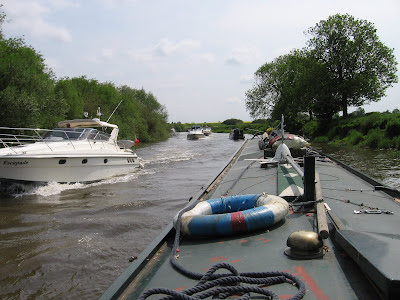 w`end before we went into York Naburn was busy with cruisers holding a barby on the lock island. In the picture above can be seen some of about 20 cruisers we passed on there way to Naburn and below the cruisers who left after us are passing under Cawood swing bridge that has been opened for some of the very tall cruisers. This point of the journey is about halfway so I am hoping they will all have entered Selby by the time I get there.
I know I keep on about Selby only taking 2 boats but to be honest it`s the only part of the journey I`m worried about the thought of having to turn against the current and sit out in the river waiting my turn and then making the sharp left turn into the lock with the current trying to push the boat off course, maybe i`ll keep going but then again that means Trent Falls getting swept down the Humber out into the North sea. Guuulp! 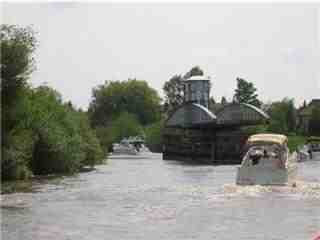 So the decision was to go in at Selby as the North sea can be a bit cold and in the picture below taken by Tina from the lock side i have made the turn and I am sitting holding the boat against the flow waiting for the lockeeper to open the gates, another narrowboat is doing the same behind me just out of picture. On the lockeepers signal i edged forward and across stream keeping the bow to the right of the lock and at what i thought was the right moment pushed the tiller over with a little acceleration and the flow brought the bow nicely into the centre of the entrance and in I went without touching the lock walls. Sadly you`ll have to take my word for it as Tina`s camera batteries faded at my moment of glory. 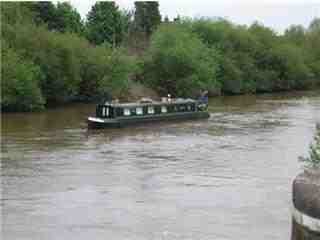 So folks I`ve not been swept out to the north sea and the blog goes on.
Posted by Les Biggs at Wednesday, June 11, 2008

sounds terrible well done glad you was not swept away. Was it easier than you thought it would be or more difficult, and would you do it again?

Hi Grey Wolf
It was easier and yes i would have no doubts about a second trip.
The flow is the worry but the lockeepers wouldn`t let you out if conditions were not safe, so at worst the turning and holding the boat against the flow could need more care but as i said they won`t let you go if it was dangerous.