TO KEADBY & ONTO THE TIDAL River TRENT

Leaving Selby we re-trace our route back along the Selby canal to travel 41 miles to Keadby where we can access the R. Trent. The journey takes in the R. Aire then turning S/east along the Aire&Calder navigation to Southfield Jct where we turn into the New Jct. Canal one of the last canals to be built and completely straight for 6 miles. This will bring us to the Sth Yorkshire Navigations and the Stainforth & Keadby canal into our destination of Keadby. 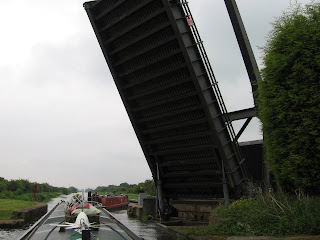 Above and below one of key operated lift bridges and from the 2 different views can be seen just how big they are. In the top pic i am taking `Valerie` through and to the left is the grassed edge of the original bridge and i would guess the larger bridge now in use was the result of road widening and so has to span a wider part of the navigation. It can be seen clearer in the lower pic with the bow of `Tui` just passing the original bridge gap. 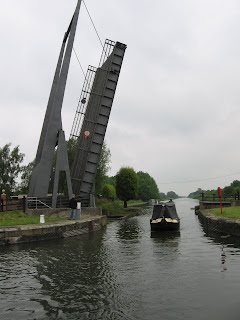 Below the only freighter we met while cruising, this one was coming from Goole along the Aire&Calder. 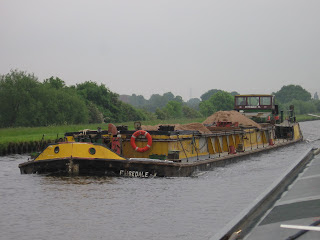 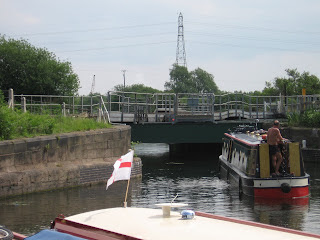 Above & below is the Vazon sliding railway bridge built in 1915 and said to be 1 of only 3 in Europe. Winches slide the bridge complete with rail track sideways to allow boats through. We waited about 15 mins till the signal box operator had a gap in rail traffic but worth the wait to see a wonder of the canal system in operation. 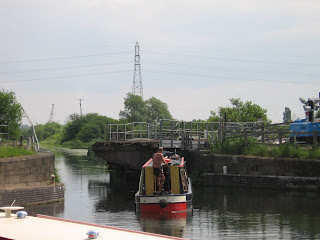 The following picture shows Keadby lock taken with my back to the R. Trent. Take note boaters the post office/stores has moved from the location in the First Mate guide it is now in the opposite direction just past the chippie. 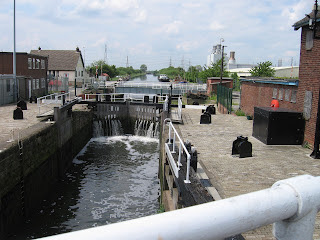 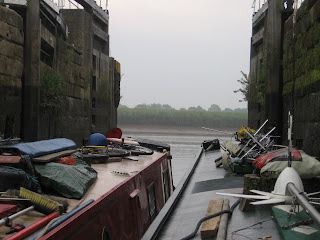 Above i`m sitting in Keadby lock with Tina/Andy for our 6.30am, yes 6.30am the tide waits for no one even boaters to exit onto the Trent. Below i am coming out (Tina pic) and that ship will have to wait even if he is a little bit bigger than me, ok you guessed it`s actually moored and discharging a cargo of timber. 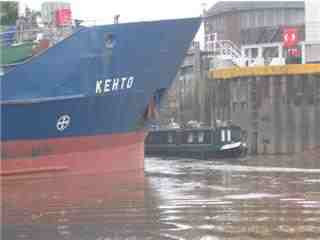 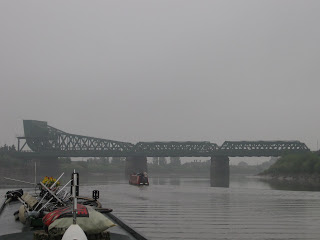 keadby road and rail bridge. This bridge was built in 1916 and when it was operating the tank seen to the far left curving upwards would be pumped full of water causing the bridge to raise and allow shipping through. 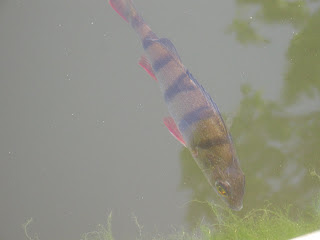 I`ll just leave you with this Perch that took a fancy to nibbling the weed around my rudder one evening while moored.
Posted by Les Biggs at Tuesday, June 17, 2008

Hi Lesley/Joe
Many thanks, I like to include just a few of the many details i glean from what I regard as a second schooling as well as a second life afloat.
Glad to see the progress of your boat.
Blog readers follow the build of NB CAXTON by clicking the link top right `other boaters sites`
LES