No i`m not leaving the country for a holiday, this life is already one big holiday, it`s just that we`ll be leaving England to enter Wales soon.
This is Wrenbury and as we leave our moorings after a pleasent 2 day stopover you can see on the right the boatyard of Alvechurch holiday boats and at the liftbridge Tina can just be seen about to lift the bridge with her BW key as this one is electricaly operated.
Just a 5 min walk across a field was the village shop/post office handy for odds & ends to keep us going for a while. 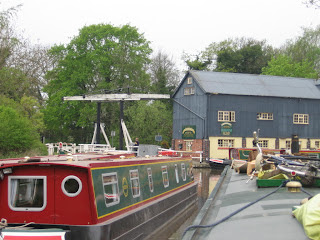 Before i forget here is the painting i bought that i mentioned in an earlier blog. As i said painting not a print and £20 with frame. 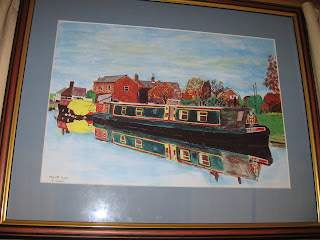 Below, and not in the order i wanted the pics but no matter, is The Mere next to the town of Ellesmere. This one is the largest of 9 Glacial Meres that were formed when large blocks of ice were left behind in the last ice age which then became buried by mounds of debris and as the ice melted large hollows were left that became lakes. Lovely places to walk.
As Ellesmere is approached on the canal Cole Mere & Blake Mere are passed, one each side of the canal, and make a very stunning all round landscape. 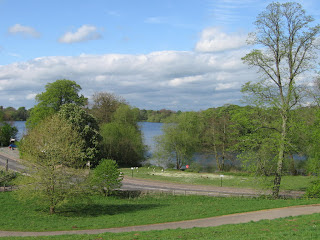 This is Whitchurch lift bridge and is the bridge i had the view of when i last blogged. Off to the right is the Whitchurch arm just about 300yds of it. The town is about 15mins walk and as there was a Tesco......lets go Tesco lets go Teeesssco....sorry i tend to burst into song with Tesco. Now as we had bags of shopping we caught a bus that stopped at the end of the arm. I don`t know what bus fares are in your neck of the woods but we paid 39p. When we were last in London the min fare was £1.30 and it was i think just below a £ in Luton. 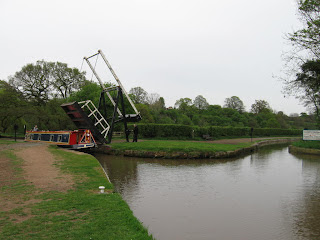 Out and about on the canal you meet all kinds of towpath walkers. 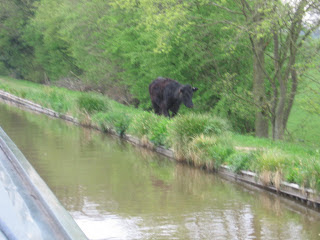 Les
How I remember that postoffice/shop at Wrenbury. We came across it on our first canal boat holiday (Baptism of fire wind rain...) That place was our saviour! By the time we reached it we had just about used up all our food supplies!!. LOL

I drive there sometimes when I am home at weekends, they do the most delicious pies and pastries made at a local bakery. They have a great scare crow hunt in summer too, which I have yet to get to!!too

Hello Carol
Nice to see you still read the blog.
See a few scarecrows on some of the passing boats so no need to go on a hunt.LOL