The Cumberland Basin branch of the Regents Canal

Because of our present location in Warwickshire  my recent trip to London for a hospital appointment terminated at Marylebone station instead of the usual Euston.
This, I decided, would make it easier to cross off another entry on my canal bucket list. My plan was to walk past Baker street and cut across Regent`s Park towards Camden and onwards to the hospital at Hampstead. With the information I had gathered from an on-line 1868 ordnance survey map my mission was to find a branch of the Regent`s Canal long filled in. 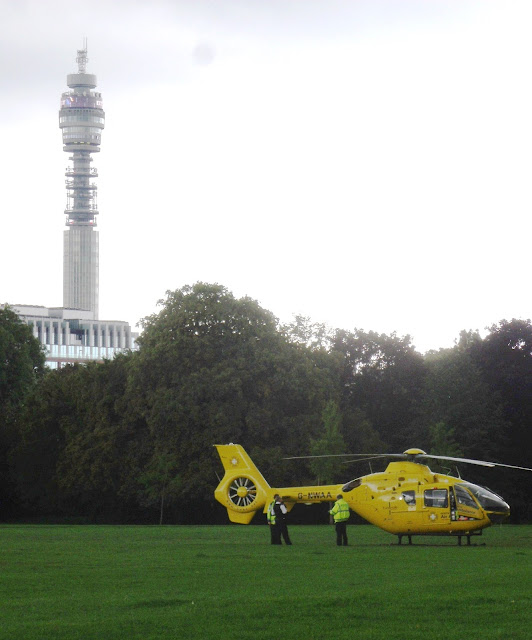 Strolling across the park and seeing the air ambulance land my thoughts were "at least I am able to walk to the hospital".
For those unfamiliar with the London skyline that`s the post office tower in the background. At 620 feet high it was when built in 1965 quite a tourist attraction with people paying 20p or as it was then four shillings. Nowadays people pay £25 ($37) for the view 750feet up the Shard.
The viewing area on the post office tower was 520 feet. This means the Shard viewing platform is a 16% increase in height  but, correct me if I am tragically wrong a 12,000% increase in price.
The shard pulled in £5million in entry fees to the viewing platform in it`s first year.

A big thank you to the anonymous resident for allowing me access to take the picture below from their balcony. 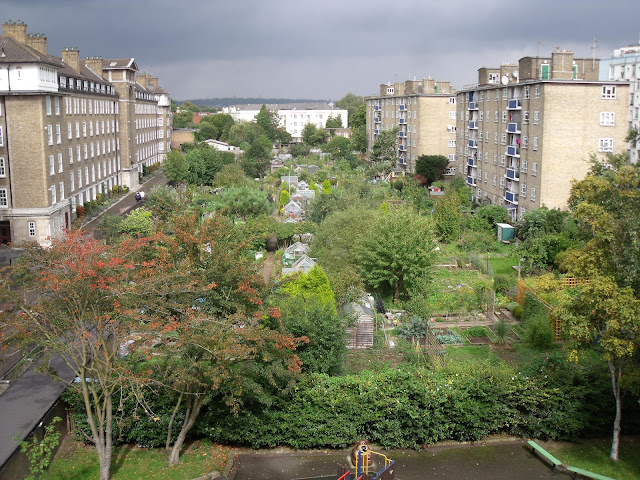 Below all this foliage is the filled in Regents Canal`s Cumberland Basin constructed in 1810/13 that served Cumberland straw and hay market. With the thousands of horses in London this must have been a big market with the boats bringing in the feed and bedding and taking away the manure. The canal also transported arms to the barracks from Woolwich. Coal, timber and stone were regular cargoes. Many stone masons premises sprung up along Euston road. The basin is very close to Euston station which together with the new St. Pancras station played a big part in the demise of canal transport. History of market Part one and Part two.
The basin was filled in around 1941 and as you can see is now mostly allotments with a children's play area in the foreground. It has been reported that old working boats are buried here and in fact allotment holders have over the years found parts of boats. 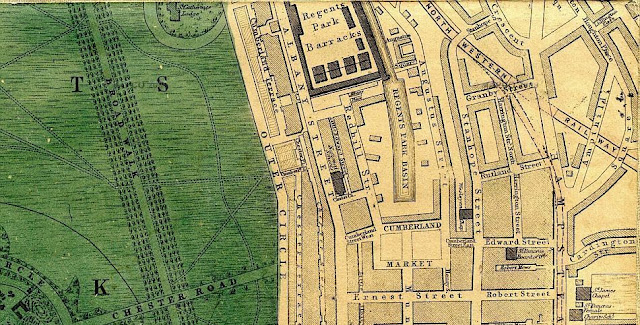 The map above is from Mapco and is dated 1868. The left arrow indicates the junction that the Cumberland Basin branch left the main line of the Regents canal. This is the point where if you have cruised this way the canal having passed through London Zoo makes a sharp 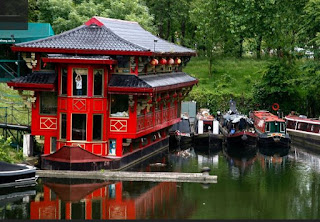 left turn towards Camden. Ahead just a short section of the arm remains and amongst some narrow boats is the floating Fen Shang Chinese restaurant.
The right arrow indicates the bridge I pictured above named on the map as The Avenue. Nowadays it`s called Gloucester gate. It was constructed in 1877 to span the canal. It would be interesting to know something about the original bridge. 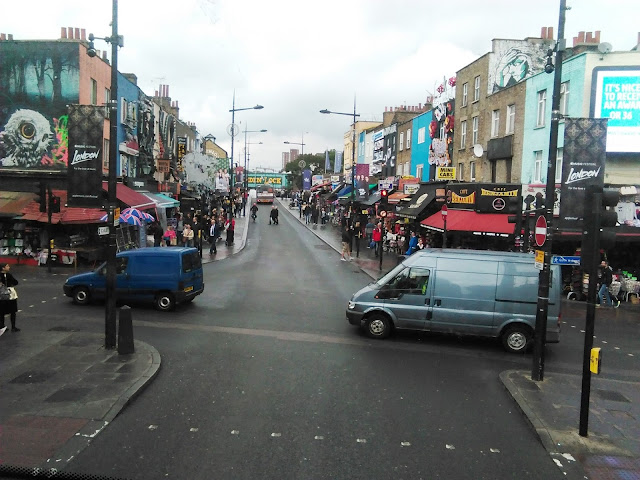 Time is running out so I hopped on a bus to Camden. This is the busy market area and the Regents Canal passes under the road just near the distant bridge advertising "Camden Lock" although they mean the market not the canal lock.
Before we get to the canal lock it`s interesting as  you wander along the street to look up as there seems to be a lot more of interest than the rubbish the shops are plying to the tourists. Camden and it`s markets is the fourth largest attraction in London and because of the huge visitor numbers  at weekends (100,000+) the underground station is only open for arrivals on Sunday afternoons. 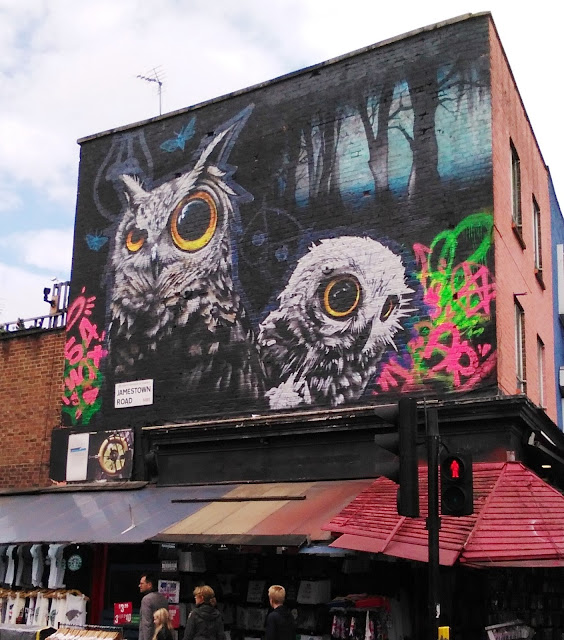 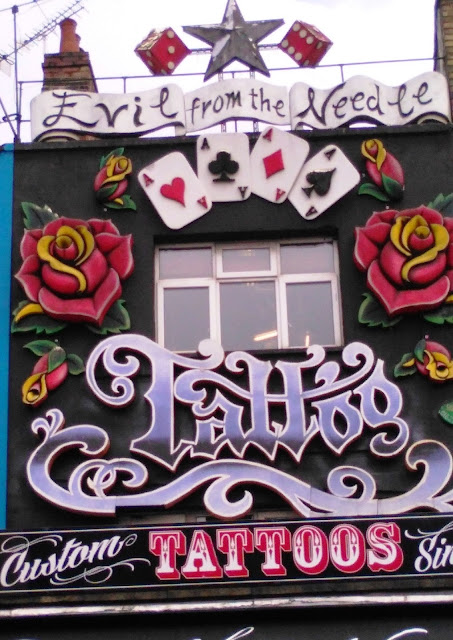 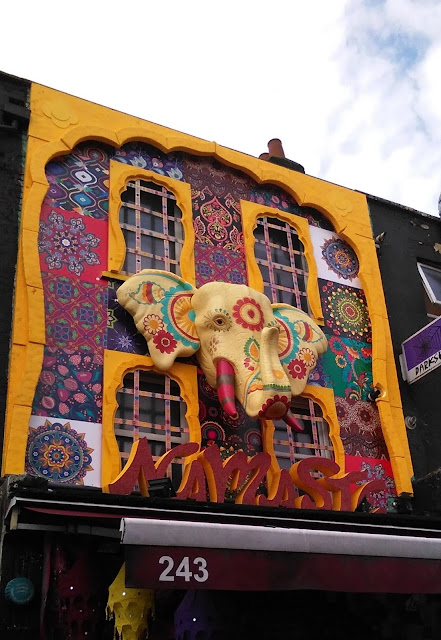 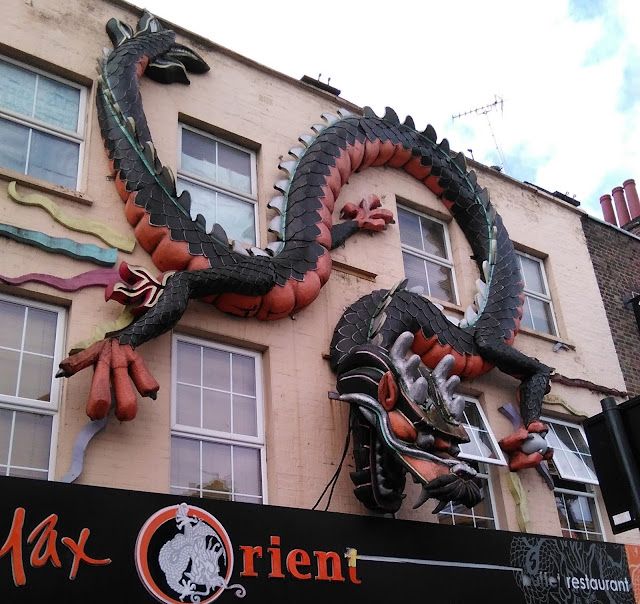 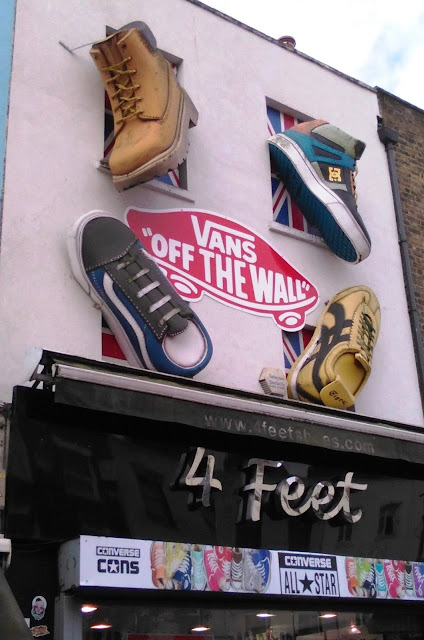 That`s it to many shops I need my canal fix and here it is a very weed covered Regents canal. This is a quiet weekday, if you come at the weekend this whole area is swarming with people watching the boats passing through the locks. 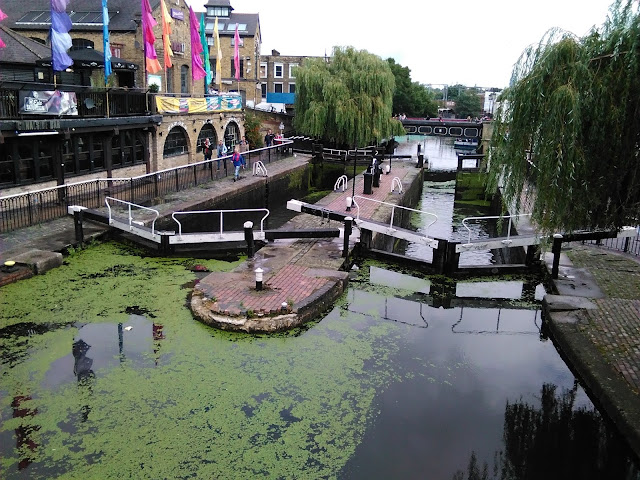 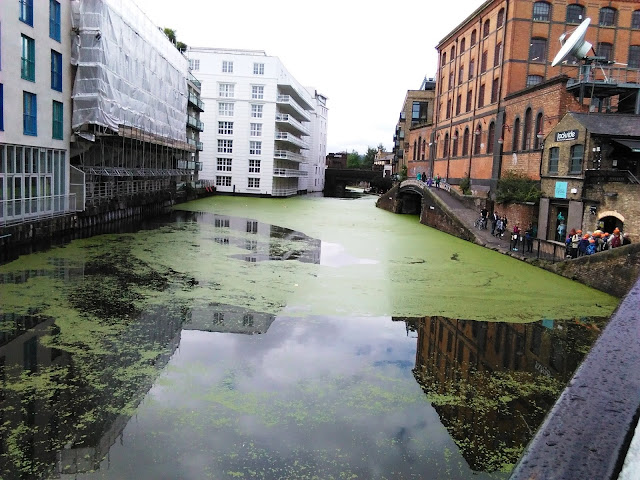 Deep breath and I can now face the walk to the hospital.

You are lovely, Mr Biggs. Wonderful to read your grounding and centring journey to your hospital appointment,
M&Dxox

Les:
The arrow where the Cumberland arm left the Regents Canal, the straight lines going towards the bottom of the pages "was" the now buried Regents canal or something else??

Hi Bryce
What you refer to is a walk way through the park. If you tap the pictures they should enlarge and you can see it marked. Also try the map link and get a larger image, Regents park is what you need on the maps or a modern day Google image will show the parks walkways and the bridge.
Les

Marilyn, glad you enjoyed it.
Lesx