Through Hillmorton and Rugby

Setting off from the outskirts of Braunston on Tuesday it was just 20 minutes before we met Del and AL on Derwent 6 heading into Braunston to pick up their calfer calififera calhalifer hot water tank that sprang a leak. Lack of boats meant we just drifted in the middle of the canal catching up on our travels. We spent the night at Clifton on Dunsmore where we spotted Nb Oakfield. We moored up and were just thinking of walking back before Jaq`s appointment when they cruised by. Today we caught up at Rugby with Ann and Keith playing host and a very pleasant hour or so was spent chatting on the good ship Oakfield.
So tonight we have moored just short of Brinklow with the fire roaring in anticipation of plummeting temperatures we are very snug.﻿ 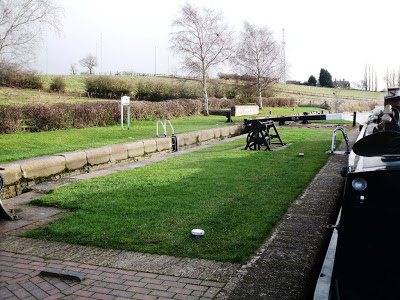 The winding gear on the grass at one time enabled the locks to act as a side pond. Half a lock of water could be diverted into the other lock instead of the whole lock full of water being lost down the flight. 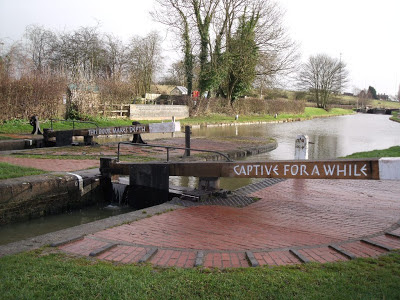 Poetry on the lock gates halfway down the flight of 3. 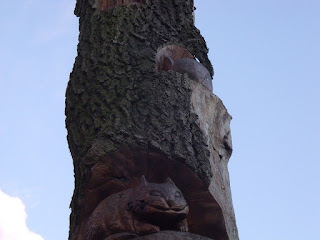 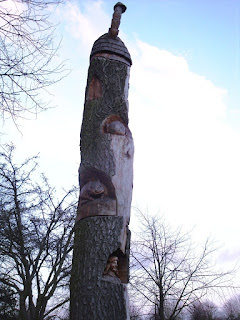 Walking from the canal at Clifton to Reach Jaq`s chiropractor appointment we spotted this tree on the edge of a park. It is a storytelling tree carved in 2007 to commemorate the 175th birthday of Lewis Carroll. His real name was Charles Dogson and he used Carroll as a pen name when he wrote Alice in Wonderland which is the theme of the tree carving. Wooden carved books were placed around the tree and used by school children when listening to stories.
Posted by Les Biggs at Wednesday, December 05, 2012

sorry to correct you a tad, Lewis Carroll was Charles Lutwidge Dodgson - a second D in his surname

We should know - as direct descendents!

Hi Paul
Thanks for the correction. Looking at the note I made at the time it is just my bad typing that dropped the `d`
Fantastic family history.
Les